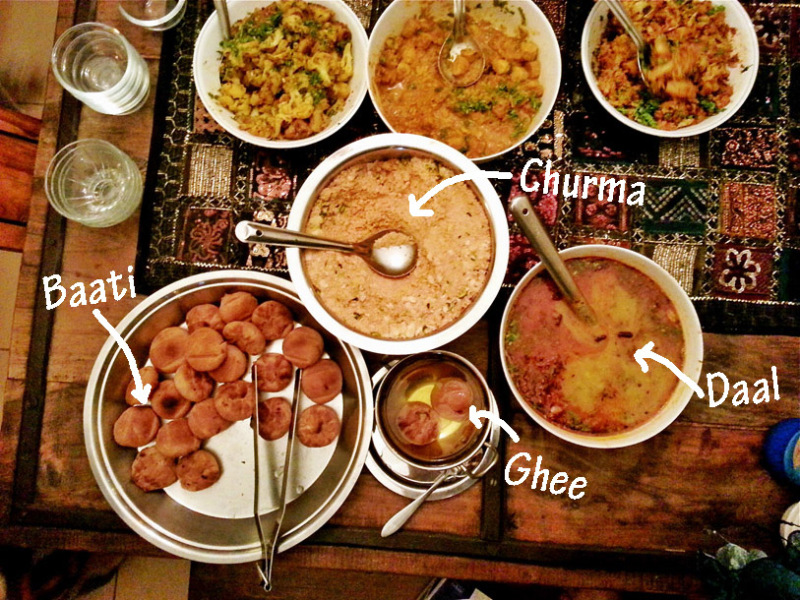 “ DAAL-BAATI-CHOORMA”  is the traditional  Marwari food which is considered as ‘The King Of Rajasthani Cuisine’ .This dish unfolds the rich and royal culture of Rajasthan despite of desert’s dry terrain which were prone to droughts, harsh  climatic conditions ,inadequate water problems and scarcity of green vegetables and lots of wars. No Rajasthani festive, wedding menu or religious occasions is complete without this popular recipe. The heart of Rajasthani cuisine lies in Baati and soul in choorma; you definitely can’t get the taste off your mind after tasting this magical trio. So what exactly is DAAL-BAATI-CHOORMA? It is a platter which is the combination of 3 things:

PANCHMEL DAAL: When 5 types of pulses that is Bengal gram, arhar, split green gram, split black lentils, whole green gram are mixed and cooked together in the form of a curry, it consists of Panchmel Daal. Baati without daal is incomplete in the same way as a husband is incomplete without his wife.

Inside Tip: While eating squeeze half lime into the panchmel daal, mix it with a piece of baati, it will taste even better.

BAATI: Baati, the world famous of Rajasthani cuisine evolution is hard round baked balls made up of wheat flour with clarified butter concealed within having high nutritional content. Minimum quantity of water is required for its preparation.  The superstar of popular rajasthani food ‘BAATI’ was once the survival food at war. The first mention of Baati was during the time of Bappa Rawal – the founder of the kingdom of Mewar in Rajasthan. It was a nomadic warrior tribe before they settled into the tapestry of a kingdom and got Chittor in form of dowry from Maan Mori, Baati was the Guhilot’s official war time meal. Stories say that before leaving for war, soldiers used to make round wheat chunks and cover it under the sand at deserts so that these wheat balls get baked with the heat of sun.  After the soldiers returned from war they had ready-to-eat food. Moreover baati is easy to store and can be stored for longer period.

Take 1 cup whole wheat flour,1/2 cup semolina,2 tbsp Bengal gram flour,8 tbsp milk,4 tbsp melted ghee, salt to taste and now Mix all the ingredients and knead into a firm dough. Knead well for 5 to 7 minutes. Divide the dough into 10 equal portions and shape each portion into an even sized round. Heat a gas tandoor and put the baatis on the grill of the tandoor.Cook them on a medium flame for 20 to 25 minutes. Cooking the baatis over a medium flame will ensure that the baatis are cooked on the insides also. Alternatively you can bake the baatis in a pre-heated oven at 200°C (400°F) for 10 to 15 minutes turning them over occasionally .Arrange the baatis on a serving plate, break each baati into two pieces and pour melted ghee on the baatis.

CHOORMA: Choorma is sweet dish, whose one bite will make you crave for more and more. As you put a bite in your mouth, the sugar melts in your mouth and chewing further the flavor and fragrance of desi ghee (pure butter) makes you feel heavenly. Traditionally crushed pieces of wheat baati when mixed with lots of ghee and jaggery/ crushed sugar together results into Choorma.

Inside Tip: Do lick your fingers after taking the first bite of choorma as the ghee and sugar on your fingers taste really good. Choorma can be eaten alone as dessert or with combining dal .In both the ways, it is delicious.

DAAL-BAATI-CHOORMA is the most wanted dish amongst the travelers exploring Rajasthan. Your trip to Rajasthan is meaningless is you have not tasted it. Food provides an insight into the life of people who lived there thousands of years back and who are presently living there. To know and understand the culture, you have to taste it. It is an insight to the ethos and mood.

You are cordially invited to Rajasthan.

Come fall in love with the Rajasthani Cuisine !