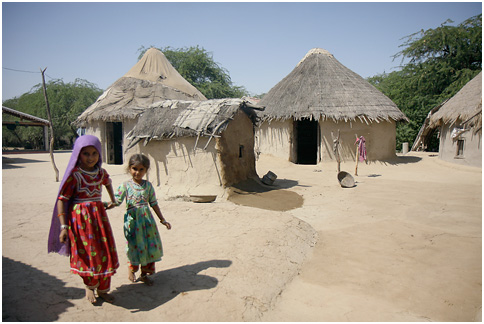 Kutch, situated in the north-western part of Gujarat, is the largest district in India, covering a total area of 45,652kms. It is broadly divided into three distinct ecological regions. The northern most part, nearly 30000 sq.km, is largely covered in barren, arid deserts, which includes the Great Rann of Kutch and Little Rann of Kutch. This part, the Great Rann of Kutch, is famous for tourism. The central part is covered by a belt of arid grasslands, called Banni Grasslands, famous for its wildlife. This regions spans an area of 3,847 sq.km. The southern part, which is the most fertile and urbanized part of Kutch, covers the coastal lines, including the Gulf of Kutch.

The major part of the population subsists handicraft and tourism generated income for their livelihood. Kutch is famous all over the world for its handicrafts. Originating in the 16th and 17th century, the work coming from Kutch is unique, and techniques have been passed from generation to generation. The major female population of Kutch earns their livelihood by selling handicraft work.

A unique feature to this region is their mud architecture, consisting of cylindrical houses called ‘Bhungas’ or hut-like houses. The origin of this architectural form is believed to have emerged as the aftermath of an earthquake in1819. The natives of Kutch narrate an interesting story of how this particular structure came into existence. They say that the region of Kutch, Rajasthan and Sindh was inhabited by nomadic pastorals, who had a lot of cattle. Sindh, being a fertile land which received comparatively good rainfall was an ideal summer abode for them while Kutch, rich with grasslands, was perfect for cattle grazing. Thus, the pastorals from Kutch and Rajasthan used to travel to Sindh during summers and come back as the monsoon commenced.

Bhungas, which originated in Sindh, were suitable to different climatic conditions and disasters which is why they spread like wildfire across all the villages within Sindh. The people of Sindh over the years became experts in building such structures.

The Partition of India and Pakistan was declared in summer 1947; which is why many of the pastorals from Kutch and Rajasthan were in Sindh at that time period. However, when asked to choose between living in India and Pakistan. They chose Pakistan, as Sindh was more fertile and had better climatic conditions to support their bread and butter. A few people from Sindh migrated to Kutch, and this was when Bhungas started becoming popular in Kutch slowly.

The real growth of the Bhunga in Kutch happened after the 1971 India-Pakistan war. This was the aftermath of the realization that living conditions in India for Hindus was much better than Pakistan. During the war, the Indian army camped in three Hindu dominated villages in Pakistan. The war lasted 12 months, after which, a major relocation commenced, wherein close to 50,000 people moved to Kutch and Rajasthan from Pakistan. Due to this, the cylindrical architecture spread rapidly in various parts of Kutch. As this population had expertise in making Bhungas, they continued to stay in Bhungas after migration. The locals of Kutch acknowledged the advantages of Bhungas and started making Bhungas for themselves. To know more about the migration of the Bhungas across border, have a glimpse of this documentary:

In 2001, an earthquake of 7.9 magnitude on the Richter Scale struck Gujarat which caused a huge loss of life and property. The earthquake had great impact on the people’s life and after that started looking for durable residences. This was the time period after which the frequency of the Bhunga reduced, as almost everyone shifted to concrete houses in order to gain a sense of security from natural calamities.

This article was written and submitted by Shalvi Suman

Exploring the Legacy of the Mother-Bunda Sculpture