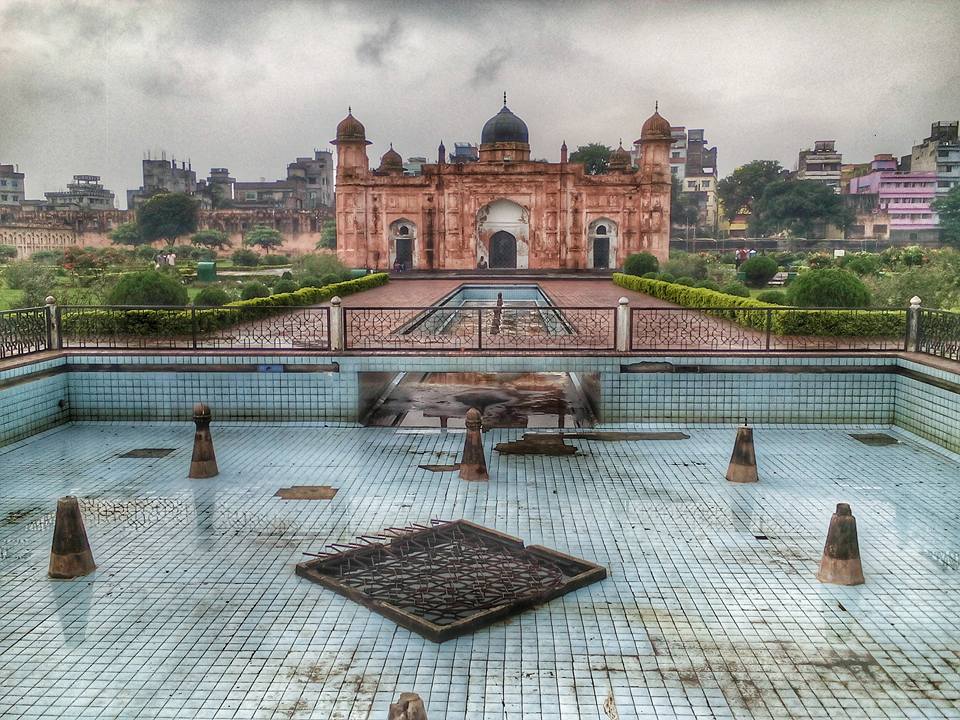 Dhaka city has rapidly developed into a modern urban city of the 21st century, hardly leaving behind any traces of its rich and diverse history.

But fortunately, there is a way to visit the seventeenth century Dhaka.

Through a time machine? Nope, a visit to the Lalbagh Fort located in the Old Dhaka by the river Buriganga will do the trick.

The Lalbagh Fort is an incomplete structure by a Mughal prince and later emperor himself named Muhammad Azam. He started constructing the fort in 1678 during his vice-royalty in Bangladesh. However It remained incomplete when he was called by his father Aurangazeb to the capital Delhi.

After the end of royal Mughal period, the fort was abandoned. In 1844, the area achieved its name as the Lalbagh Fort.

The fort is divided into three buildings:

The mosque was used for prayer during the Mughal Era, and still in use. The beautiful structure and the handy work inside are mesmerizing. People are amazed by seeing this kind of royal art. Many Islamic art and wall designs are also preserved inside the mosque.

This is the only place in Bangladesh where 9 rooms are decorated with unique marble stones, tines and handicrafts of flowers and leavers. The roofs are made of black stones. In the top of the tomb, the dome is covered with pure copper. This beautiful 20.2 meter tomb was inaugurated in 1688. There are 3 gateways to enter the fort. The southern entrance is the most important and one can see it from the river Buriganga. It is a three-storied structure, where the middle structure is covered by Minaret. This is why it looks like a 2 storied structure.

The Lalbagh Fort is filled with numerous Royal gardens and a drainage system. After a certain time Mughal emperor Aurangazeb donated the fort to Shaista khan in memory of his daughter Pari Bibi. The successor of Shaista khan got revenue after his death by leasing the fort to the government. After 1853 the cantonment was replaced in Lalbagh Fort from Purana Paltan. Currently, the Archaeological department of Bangladesh is maintaining this Historical place. This has become a key tourist attraction in Dhaka.

More than 3 million people visit this place every year.

The fort is open on all days from 10AM to 6PM except on Sundays, which is a weekly holiday.

Exploring the entire fort can take as much as two hours. But trust me, it will be well worth your time. This is a must visit heritage site!

By the time you explore the entire fort you are bound to feel hungry. Lucky for you, Old Dhaka is renowned for traditional food delicacies such as Borhanis, Kacchi Biryanis, Kebabs and a lot more. For more information on traditional food items of Old Dhaka visit http://foods-of-old-dhaka.blogspot.com/.

So what are you waiting for? Plan a trip to the Lalbagh with your friends and family and get a different taste of Dhaka city.

The Lost City Of Zaña