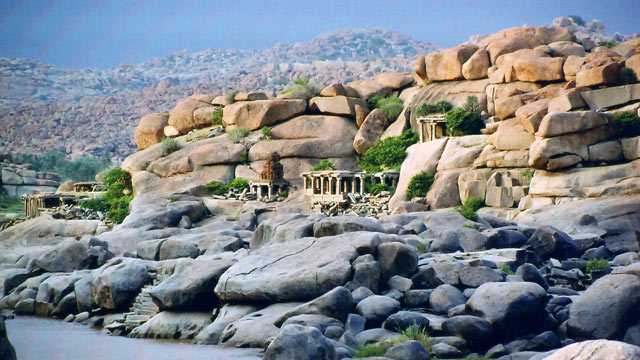 When we go about an in situ (on site in Latin) conservation, what is the best way to do it? Should we think of the site as an outdoor museum , and preserve it as per our imagination of what the site would have looked like in its heyday? A case in point is Pompeii, where restoration efforts have made the site almost like a theme park, with reconstructed roofs and gardens that are impeccably maintained.

Or, should we look for more organic preservation where the monuments of the site become living heritage with active local engagement? Hampi’s bazaar became such a site where the two conflicting notions led to the displacement of the local population so that heritage could be preserved better. The sprawling expanse of Hampi, with over 2,000 monuments set against a hilly vista of massive granite, is a UNESCO World Heritage Site.

Vijayanagara, as the city was called then, was the capital of an Empire that encompassed much the Indian peninsula, constructing massive and elaborate structures that are awe-inspiring, even today. It is one of India’s better preserved sites, with some of the temples, such as the Virupaksha temple, still in use.

The entrance to the temples is largely made of aisles of pillars, which were once the market place. All manner of traders conducted their business within these market places that were woven into temple complexes. Traders, from as far as Portugal, are known to have used this space for business.

The local population had, over generations, used these pillars to construct dwellings, making the lanes before temples a vibrant sight. These people had thus, assimilated their heritage into their daily lives, living among the ruins and in their own way, preserving it by ensuring that it evolved constantly with their lives.

Archaeologists John M. Fritz and George Michell have said about the bazaar, “By 1980, there was little besides the columns to recall those times of splendor. But the street was still a commercial center, however modest, known to locals as ‘Hampi Bazaar.’ Between the columns nearest the temple were souvenir stalls; a simple ‘hotel’ offering tea, coffee, and vegetarian meals and snacks; and a bank, presumably with the temple as its principal customer…..Hampi Bazaar was the place where the past and present lived together.”

In their work on Vijayanagara, that lasted nearly two decades,  they also said that each year in spring, the marriage of Virupaksha to the goddess Pampa would be celebrated, drawing great crowds. The ceremony involved a tall chariot being pulled up the market lane to symbolise their journey.

However, in 2012, the authorities, on the pretext of conservation, evicted the locals from their homes. The Karnataka high court sanctioned the Hampi World Heritage Area Management Authority and the Archaeological Survey of India’s purview that the site be preserved in its pristine medieval state, which required the removal of all modern interventions that the inhabitants had introduced.

The Guardian reported at the time: ‘The men came in the middle of the night and painted red crosses on the houses chosen for demolition. In the morning the people who had lived and traded in the ruins of the old Hampi bazaar stood by helplessly as the bulldozers moved in. The past, they were to discover, had come back to haunt them.’

The displacement of the local population shows a lack of understanding of heritage management. It prioritises the structure over the ambience. While the preservation of the structure is an important part of the process of conservation, local engagement, such as in the case of Hampi Bazaar, can help to preserve the ethos of the structure, in that the vibrancy of the bazaar was reminiscent of what it was when the Vijayanagar empire was at it’s zenith.

We can only hope that paradigms of preservation will evolve and the authorities will take note of living heritage.

A Glimpse into Zambia’s Dying Cultural Heritage of Vernacular Architecture