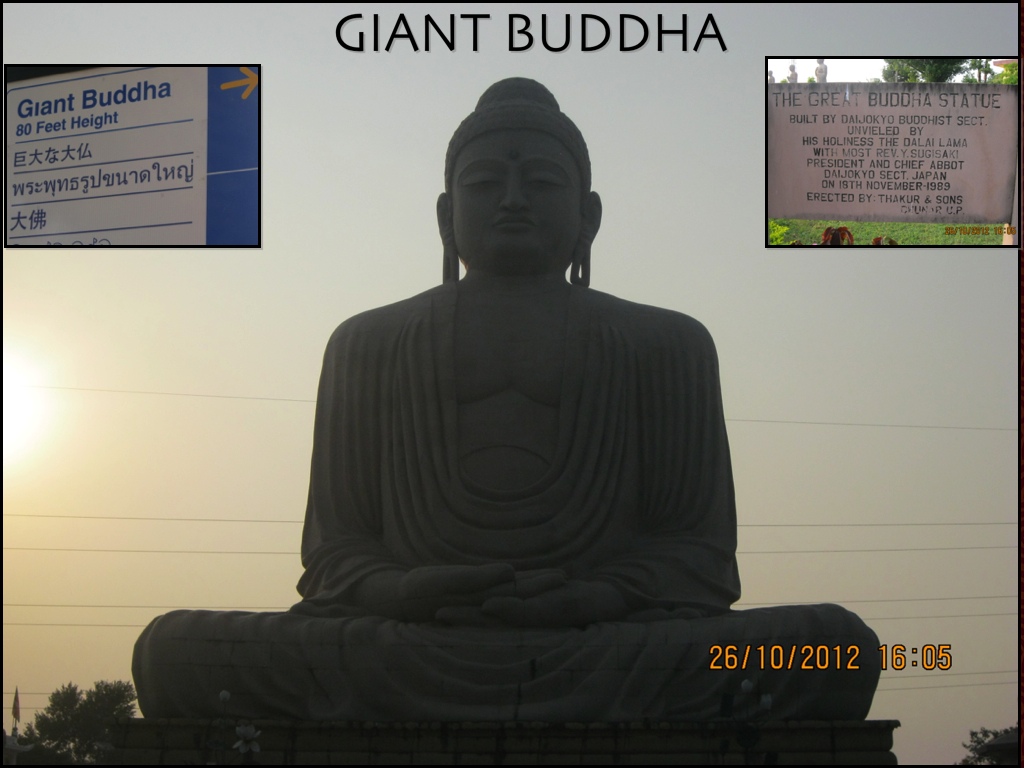 Journey to Bodhgaya was the trickiest part.
Took a bus from Khajuraho to Satna. Initially planned to take a bus from Satna to Patna but had to take train as everyone has literally scared us away from Bus stand and ORDERED us to go only by train.We took a unreserved ticket,convinced the TT and he gave us comfortable berths in 2nd AC coach ( with some super extra rupees though).Reached Bodhgaya directly in the morning.Took a shared auto and reached the Main Temple area.
Read on couple of blogs that we can stay at the Monasteries around the Main Temple.We went to Tibetian Monastery and got a room for Rs.500/-.Relaxed,got freshened up had nice breakfast and headed to the Main Temple.
A township on the banks of the River Niranjana (also called the Falgu), Bodhgaya is revered by Buddhists across the world as the place where the Lord Buddha meditated, preached and attained enlightenment.
The two major sacred sites in Bodhgaya are the Mahabodhi Temple and the Bodhi Tree, around which many other temples and monasteries of various Buddhist traditions (Japanese, Tibetan, Bhutanese and others) have been built.

The Mahabodhi (Great Enlightenment) Temple is the most sacred site in Buddhism and visited regularly by both Buddhist and Hindu pilgrims (many Hindus honor the Buddha as an incarnation of Vishnu).

The Mahabodhi Temple is one of the earliest Buddhist temples built in brick that still survives today. The ground level of the temple is 45 meters square, stretching up in a pyramid shape that ends in a smaller square platform. The central tower of Mahabodhi stands 180 feet (54 meters) tall. The brickwork on the outside of the temple depicts scenes from the life of the Buddha.
Inside the temple is a colossal image of a seated Buddha touching the earth with his right hand (a gesture known as the earth-witness mudra). In this posture the Buddha accomplished the supreme enlightenment.

The statue is of black stone but it has been covered in gold and dressed in bright orange robes.

The courtyard of the temple is studded with many smaller stupas and Buddha statues, some of which are several hundred years old. Parts of the railing that surrounds the area are among the oldest elements of Mahabodhi Temple that survive today.

Immediately next to the Mahabodhi Temple is the Bodhi Tree, (“Tree of Awakening,” also known as the Bo Tree)a descendent of the very tree under which the Buddha was enlightened, and the Jewel Walk, lined with 19 lotuses and located on the north side of the Mahabodhi Temple,marking the place where the Buddha is said to have practiced walking meditation for seven days after his enlightenment.
After 49 days of meditation, it was here that Siddharta Guatama became the Buddha, the “Enlightened One.”

The Bodhi Tree is known to botanists as Ficus religiosa (holy fig), a species of fig in the Moraceae family. The leaves of the tree are somewhat unusual, being cordate in shape with a distinctive extended (or caudate) tip.

The Bodhi Tree that exists today is not the exact one that shaded the Buddha’s meditation 2,500 years ago, but it may well be a direct descendent.
In the 3rd century BC, Emperor Asoka’s daughter Sanghamitta brought a branch of the Bodhi Tree to Sri Lanka and planted it in Anuradhapura, where it still grows today. According to one tradition, Asoka’s wife destroyed the original Bodhi Tree out of jealousy over the time the emperor spent there.
Other accounts have the tree destroyed in the 7th century. But most reports agree that the original tree was destroyed and replanted using a shoot from the Sri Lanka tree.
Below the tree is a platform on which the footprints of the Buddha have been carved in stone; near it is a slab of red sandstone, called the Vajrasan, which marks the spot where he sat in meditation.
In the third week, the Buddha contemplated the Bodhi Tree from a site nearby, which is marked by the Animeschalochana Stupa.
Every year, millions of Buddhist pilgrims, mainly from Asian countries, flock to Bodhgaya to be inspired, dissipate negative karma and earn merit by visiting the holy site where the Buddha became the Buddha (“Enlightened One”). Throughout the day and night in the height of the pilgrimage season, monks in colorful robes can be seen meditating where the Buddha did, studying dharma texts, making offerings to the many statues and stupas on the site, and circumambulating (walking around) the sacred Mahabodhi Temple.

After spending good time at Mahabodhi Complex,we hired a Rickshaw and went around all the monasteries – Japanese,Chinese,Tibetian,Bhutanese,etc.

Another attraction is 80 Feet Buddha Statue in Sitting posture.

Then we went back to the Tibetian Monastery took our bags,had a quick dinner and started back our journey to next destination.

Tips:
1.Walk around choose a monastery and stay.
2.Take Rickshaw ride to cover all other monasteries.