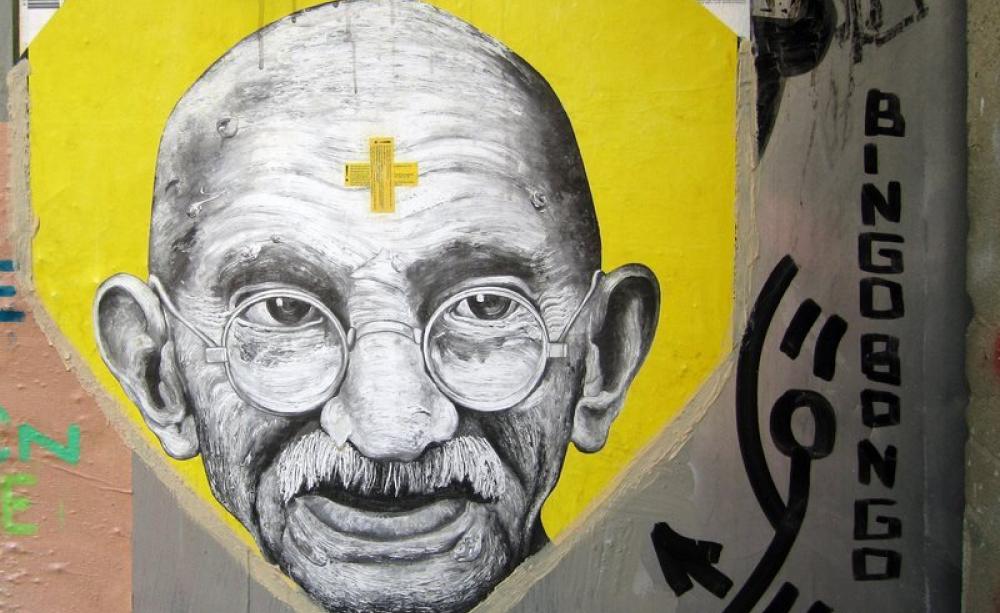 The name Mahatma Gandhi has become synonymous with peace in India. Gandhi is renowned for his non-violent campaigns by civil disobedience, and is still remembered for his immense contribution to humanism & spiritual-political movement. His sacrifice earned him the title of “Father of the Nation” of India-Mahatma Gandhi is the man of hope.

Dr Martin Luther King,JR commented once on Gandhi: “If humanity is to progress, Gandhi is inescapable. He lived, thought, and acted, inspired by the vision of humanity, evolving toward a world of peace and harmony. We may ignore him at our own risk.”  Till today no one dares to ignore this great man and the contributions he made to the Indian context. Whenever we’re talking about humanity & peace we almost always recall the history of Mahatma Gandhi.

People all around the world influenced by Mahatma Gandhi’s charisma. Romain Rolland, a French dramatist, novelist, essayist, art historian and mystic who was awarded the Nobel Prize for Literature in 1915 said about Mahatma Gandhi: :Gandhi is not only for India a hero of national history, whose legendary memory will be in the millennial epoch. Gandhi has renowned, for all the people of the west, the message of their Christ, forgotten or betrayed.

For many, he was like the return of Christ. For independent thinkers, Gandhi was a new incarnation of Jean-Jaques Rosseau of Tolostoy, denouncing the illusions and the crimes of civilization, and preaching to men the return to nature, to the simple life to health.”  Gandhi was born to the Diwan of Porbandar, in the state of Kathewar in Gujarat in October 2, 1869.

His mission was to fight against injustice, but in a different way. There is a story which changed the course of Mahatma Gandhi’s life. In 1893, he went to Africa to fight a lawsuit. One day, Gandhiji was travelling in a first class rail compartment. Suddenly he was thrown out by railway officials only because a white man objected his presence in the first class compartment. Mahatma Gandhi felt tremendously. Afterwards, he established Natal Indian Congress to improve the conditions of the Indians there.

Coming back to India in 1914, he started travelling around the country listening the woes of the common people. He launched 3 significant movements with one goal – freedom from the British rule.The first one was the Non-Cooperation Movement, the objective of which was “the attainment of swaraj by peaceful and legitimate means”. The method was to boycott foreign goods and official durbars, British courts and schools, give up honors and titles and go back to the use of ‘Swadeshi’ goods.

His second movement was civil disobedience which started with the historic Dandi March or the ‘Salt Satyagraha’. In order to oppose the British Salt Law, Gandhiji marched to Dandi along with his followers to make their own salt.

In 1942 he began his third movement, called the Quit India Movement. This movement resulted in the ‘Quit India’ resolution on August 8, 1942 urging the British to leave India. Gandhi gave a slogan ‘Do or Die’ during this campaign and every Indian started dreaming of a free India after this movement. Gandhiji told during that movement:  “We shall either free India or die in the attempt; we shall not live to see the perpetuation of our slavery”. Well, finally India gained independence on 15th August 1947.

Mahatma Gandhi is an inspiration & his views are relevant in today’s world’s perspective as well! He said: “Non-violence is the greatest force at the disposal of mankind. It is mightier than the mightiest weapon of destruction devised by the ingenuity of man.”

The Symbolism behind Rosca De Reyes