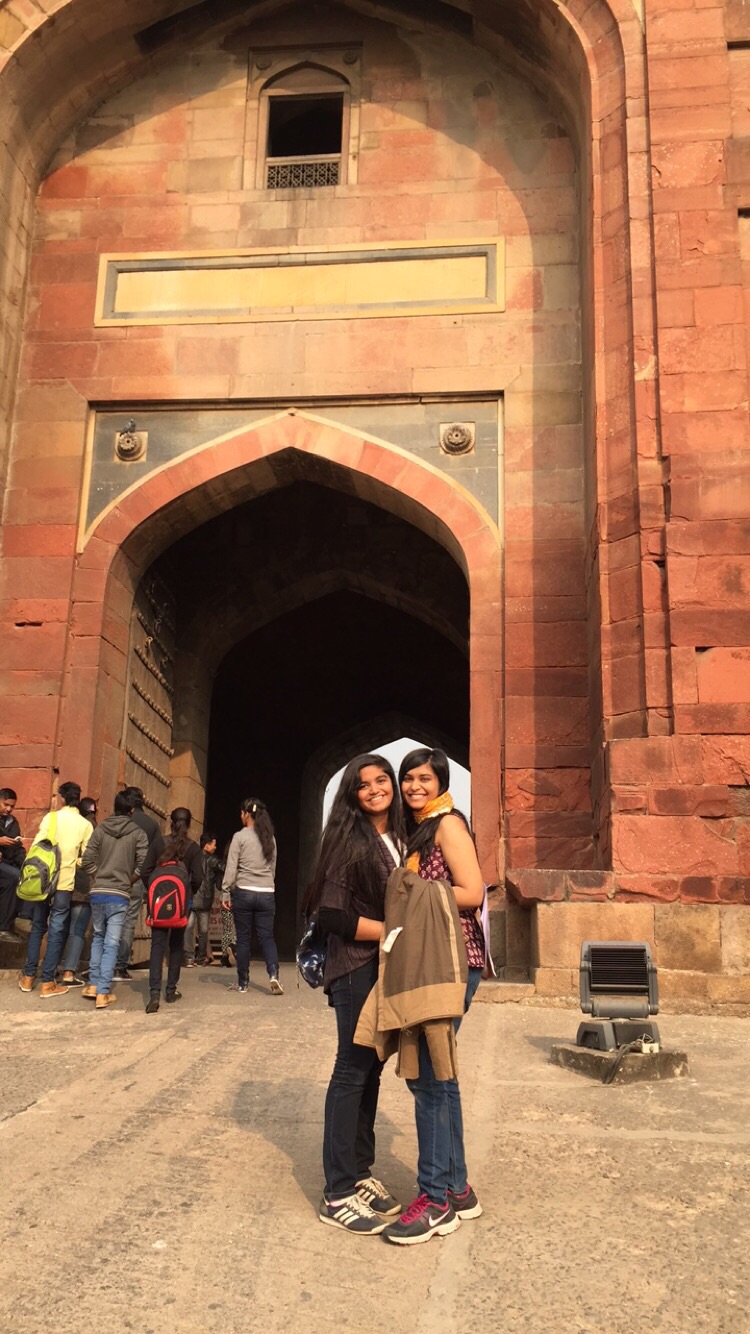 Getting up at Seven on a Freezing Sunday Morning seemed torturous to me. But the commitment made to my friends who joined me for the GoUnesco event at my request forced me to get ready. Finally after shoving away all lethargy, I stood in front of my Wardrobe and looked for hues, which would make me look radiant in front of the dilapidated settings of the Qila. The Old fort is not a usual visiting site for Delhiites, inspite of its centrality in location. The glory of the Delhi Zoo and the boating complex behind it often shadows its popularity. I myself had visited the site once in twenty years and that too for a band festival, which was conducted in the locality. Thus the idea of going there didn’t intrigue me for I wanted the destination to be more mainstream.

Half-heartedly, I went to the monument and bought the tickets. There I met zestful volunteers who were only glad to pen down our names on the paper. Even while getting myself registered, I had no clue about what did this event entail. In fact, I told my friends that it would be a carnival with lots of activities etc. But a volunteer surprised me by revealing that there is a treasure hunt organised for us. The rest of the day was spent in running from one feature to the other, trying to observe each of the structures carefully by understanding its utility. For instance, we were told to identify a characteristic of the Bada Darwaza, which allowed for the soldiers to throw hot water and missiles on the enemies. But the activity, which made me think and apply, was finding two faults in the architecture of Hammam (the Bathing area). We went inside the feature with a torch, looked and observed carefully the terracotta drains, the flooded region etc. The feature looked complete and perfect. We couldn’t find a lacuna in its structure. But a Eureka moment came when I noticed that the stairs leading to the bathing space were too steep, which increased the chances of the king to fall down. I felt content and happy with this discovery. There were Eight teams that participated in the treasure hunt. We finished sixth. But I was satisfied with myself because the experience was a fulfilling one. I didn’t run from one clue to the other. I took time to observe each of the features. I noticed the dimensions of the bricks used, the probable dept of the foundation of the structures, the leftovers of the ornate patters drawn, its utility etc. It was almost as though I have been transported to a different era when the kings used to live in the palace. I analysed the architectural styles by differentiating it from the Mughal Architecture.

But one question kept bothering me, “ How does this place do justice as the venue to host light and sound show in a heritage city like Delhi which has been made and destroyed not less than Eight times.” Well it’s been through a lot came an answer from behind. This statement, quite succinctly cleared my dilemma. Many Myths as well as material evidence tell us that the compound was the site for the famous city of the Pandavas – Indraprastha. The excavations carried out by the Archaeological survey of India reveal that the pots found in some of the layers date back to a period as old as 2000 BCE. The Kunti Mahal which still exists within the compound is said to be the place where Kunti, the mother of the Pandavas, lived. After being abandoned for 5000 years this site came to be reoccupied by the Mughal emperor Humayun who began the work of building the Quila. It was in Dinpanah, as the site was then called, that Humayun lost his life. Later Sher Shah Suri, the Afghan emperor renovated the Fort and named it Shergarh. Next, Hemu came to occupy the fort by defeating Akbar in the Battle of Delhi.

The Fort always stood like a standing testimony of the much ignored prophecy – “ whoever builds a new city in Delhi will lose it.” Pandavas, Humayun, Sher Shah Suri, and Hemu all had but relatively brief tenures ensconced there – Pandavas, lost the city to the Kauravas in a game of Dice, Humayun on two separate occasions, having lost the fort to Sher Shah only five years after erecting it, and dying within a year of recapturing it 15 years later. Yet the kings would come to the city. They would see themselves rise to maximum glory and then experience a nasty defeat. Shah Jahan, built the Red Fort to embellish his new capital Shah Jehanabad. The fort came to symbolise the might of the Mughal Empire. Sadly, though, it also became a possession which none of the subsequent kings could protect. Right from Shah Jahan, who lost the fort to his son, to Bahadur Shah Zafar who finally surrendered it to the forces of the Imperial British power. The British after 150 years of colonial rule hastily decided to bring their capital from the over populated and polluted city of Calcutta.  Ostentatiously, Edward Lutyens aligned the Central Vista (now known as Rajpath ) with the Old Fort at a time when PM David Lloyd George declared that the British had destroyed  the menace to ‘their’ Indian possessions (During WW1) . Within ten years, itself, the British were vehemently struggling to keep their strangle hold over this ‘Jewel in their Crown’ intact.

Thus this fort truly narrates the story of Delhi – each time it rose to prosperity, got plundered and then finally got relocated by some other dynasty. They say “there are very few things in Delhi which have endured the test of time, sky and dust being the lucky few” But I would like to add the old fort to this list.