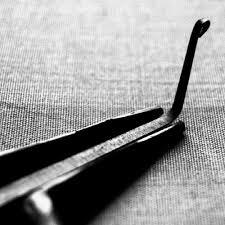 This is an excerpt from the famous poetry by Salvatore Quasimodo –  strada di Agrigentum, 1938, where Quasimodo nostalgically evokes some images of his Sicily almost to resist, through memory, the forced away from his land.

Salvatore Quasimodo evokes a man playing a marranzano, the typical Sicilian musical instrument, which over time has accompanied folk songs.

I too, if I think of an image of Sicily, when they are away from home, despite the Sicilian folklore is impressive, fantastic and rich, I think the marranzano.

Although I’ve done a lot of research, I did not understand the exact origins of this musical instrument . . .

During the centuries, in Sicily, there have been a multitude of civilizations, each with a typical folk music. For this reason, it is difficult to trace the origins.

The marranzano is assumed to have originated in the Arab culture.

But the most distant marranzano, however, was made from a single piece of bamboo, where the structure is cut out the sound tab.

Even today there are still so in the Pacific Islands (Polynesia, Micronesia and Melanesia)

New Guinea, the marranzano is considered sacred and is even used as a ceremonial instrument played exclusively by men during religious events.

The “modern” form, was created around 1350 between Europe and India.

In Italy, where many believe to have its origins, the marranzano came just in the nineteenth century.

In Sicily, the name changes from city to city…

Mariolu in Palermo, maraini in Catania, Agrigento ngannalarruni the harp belongs to the family of idiophones plucked string and consists of a metal blade fixed on an iron frame. The sound, very distinctive, is generated by the vibration of the blade and you can change the movement of the lips, cheeks and oral cavity.

The sound is buzzing, archaic, basically monotone (in the sense of the only “basic note”).

Unfortunately the music generated by the marranzano was in time associated with the local criminals, – also for the combination made as part of some very famous movies, and this reputation has led to degrade the true cultural value of the instrument which now seems to be relegated to category of the typical souvenirs, also because of the almost total disappearance of the ancient craftsmen who produced quality tools.

The Interview with The Potraj