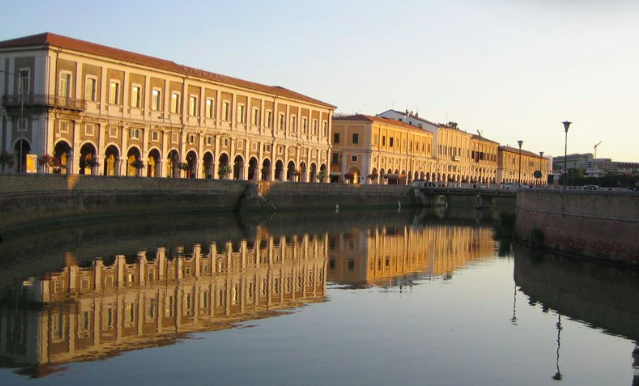 When it comes to talk about people and communities, built vernacular heritage is centrally entailed within a culture’s or a population’s architectural representation and manifestation. The importance of architecture is intrinsically linked to the utilitarian role it has for society, and built vernacular heritage, as one of its tangible products, bestows a community’s cultural identity and diversity.

ICOMOS, the International Council on Monuments and Sites, conceived and ratified the “Charter on the Built Vernacular Heritage” in 1999, defining architecture as a human product expression. The article brings us to a Central Italian region on the Adriatic Sea, the Marche, specifically alongside a 45 km river called Misa. This is the story of the marvel that the Misa reflects on its riverbed: the Ercolani porticos.
Welcome to Senigallia, the pride of the Marche region.

The word portico – porch – derives its name from the XVII century Latin “portĭcus –us” meaning door, entrance, gate. Having their origins from the Ancient Greece and its temples, porches, colonnades and arcades spread across the world and, especially, in Western European cultures. Italy has the honour to be the home of one of the longest and most remarkable porticos worldwide. Beautifully worth of mention are the porticos of Bologna, nominated as UNESCO World Heritage Site and currently in the 2006 Tentative List. They consist of more than 38 km of porticos built through the XI and XX century. Other renowned porticos are those of the cities of Turin, Padua and Cuneo.

The Ercolani Porticos of Senigallia are named after Monsignor Giuseppe Maria Ercolani who designed them in the middle of the XVIII century. Skirting the Misa riverside near the historical centre, the Ercolani Porticos consist of 126 magnificent Istrian-stone arcades. Originally conceived to lay on both riversides, due to the high monetary cost of works they were built on the right side of the river only. The porticos are a rigorous avant-garde architecture and may be considered as the herald of the neoclassical architectural style and period, being one of the emblems of the vigorous anti-baroque reaction.

The porticos were a commission of the Pope Benedetto XIV and the initial aim was to host the Fiera della Maddalena, Maddalena’s Fair. The ancient and time-unspecified tradition narrates that a French princess came from Marseille to marry a Senigallian nobleman. In memory of her motherland, she brought with her the Maddalena’s and her sibling Lazzaro’s relics that were put in a church in the outskirts specially built for this very purpose. Thanks to the relics, pilgrims were religiously lured to the city of Senigallia and the Fiera Franca, present name of the Maddalena’s Fair, was born. The Fair represented the economic rebirth of the city of Senigallia, while the relics were forgotten over the centuries.

In the past, the city of Senigallia was a vocationally mercantile and trading territory and the continuous expansion of the Fair favoured the real celebrity of the city. Numerous merchants coming from different countries – Austria, Denmark, Switzerland, England, Turkey and France – came and sold their products and merchandise. They disposed of storehouses to stock their goods and, nowadays, these street areas beyond the river Misa still carry the names of their guests’ past presence, e.g. Cephalonia square, Smirne and Samos streets and many others. In order to make the Fair marketplace more tangible and visible, the Ercolani Porticos provided an excellent response to the buyers’ and sellers’ bond in the XVII century. Below the Porticos arcades, people’s gathering was felt and experienced with a scent of social exchange, dialogue and enriching cultural diversity.

The porticos conserve the importance of the traditional marketplace and their harmonious neoclassical features. During the year, various and different markets take place; from the weekly Thursday general market to the antiques and handicraft market on Sunday. This year, the Fiera Franca will reach its 552nd edition at the end of August, but the convivial and social moment will remain unchanged under the shelter of the Ercolani Porticos.

Past and present markets under the Ercolani Porticos in Senigallia.

It may be said that the role and functionality of the Ercolani Porticos is utilitarian as every vernacular heritage structure. What is interesting to underline is that they are still permeated by their strong original identity and, at the same time, their beauty. In an era where globalization menaces cultural identity and diversity due to homogenization, the rich history of vernacular structures risk to sink into oblivion. For this reason, vernacular heritage should be preserved and used in a twofold way: continuing to carry its historical importance and aim, while adapting to present uses and community needs.

How To Build A House In A Day: Decoding Malawi Heritage

‘Malgudi’ng My Way Through Architecture: Understanding Vernacular Architecture in Bengaluru