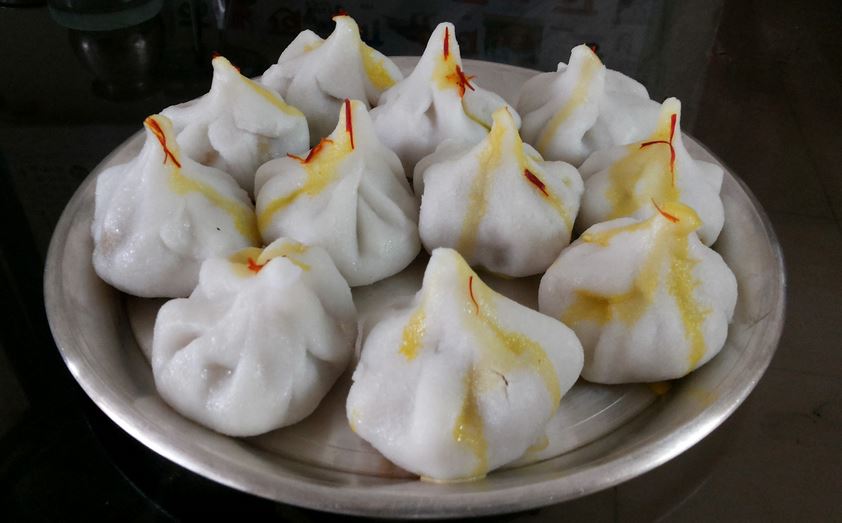 Ganesh Chaturthi is one of the most celebrated festivals of Maharashtra(a state situated in the western coast of India), the land of the great Maratha ruler Shivaji Maharaj. It is believed that Ganesh Chaturthi celebrations were initiated by the great Maratha ruler Chhatrapati Shivaji Maharaj in order to promote culture and nationalism. Ganesh Chaturthi is one of the primary festivals of Maharashtra and Modaks have a special importance in the worship of the Hindu god Ganesha. According to Hindu mythology Modak is believed to be Ganesha’s favorite food, and hence he is also known as modakapriya (the one who likes modak) in Sanskrit.

As per religious traditions, this celebrated festival concludes with an offering of twenty one Modaks to the deity and is eventually served as prasadam (gracious gift) to all the devotees.

The primary ingredient of Modak is Coconut and since we know Maharashtra has a splendid coastline to boast off, there is no dearth of availability of coconut here. As per the coconut board of India Maharashtra produces 187.44 million nuts annually and in an area of 28.10 square kilometer.

Although I belong to West Bengal – yet another State with ample of coconut production, I have been residing in Pune, Maharashtra for last 8 years for my education and vocation. I feel blessed that apart from inheriting my own culture and tradition I got a chance to imbibe another culture and heritage – the rich Maharashtrian culture as well. Luckily I also have a Maharashtrian best friend and that gives me ample opportunities to relish a number of authentic local cuisine and continue exploring more.

My first serendipity with this amazing delicacy called Modak was when I visited my best friend – Amruta’s home for the Ganesh Puja celebrations. I was initially amazed to see dozens of Momo (a steamed dumpling filled with meat or vegetables from Tibet) like stuff being offered to the Ganesh idol. It also reminded me of the dumplings from the Kung Fu Panda movie which is Po – the Panda’s favorite dish and it helps him to alleviate sadness. We had finished our Mechanics paper that day and since I wasn’t too great at it, like Po my mood was also uplifted on seeing the prasadam which I assumed was Momo.I tried to focus on the prayer songs but my hunger pangs and morose mood was craving for the Momo’s. Luckily the prayer songs finished and I was offered the prasadam.I couldn’t resist and rushed to pick up 4 of them. To my dismay, it was something that didn’t taste like momo, it tasted sweet, and my friend was quick enough to catch my expression and quickly clarified my misconception.Well it wasn’t dumplings/Momo but it’s something even more delightful for all those who have a sweet tooth. It was a sweet dumpling or what we call Modak.

Modak, the sweet dumpling can either be fried or steamed. It is made up of freshly grated coconut and jaggery, while the soft shell is made from rice flour, or wheat flour mixed with khava or maida flour. The steamed version, called ukdiche modak and is eaten hot with ghee. With ample of innovation in cooking as an avocation other variants like banana nachni modak, motichoor modak and chocolate modak have also become quite famous. Although after my first stint I tried tasting Modaks from some of the famous Sweet Shops in Pune, I believe the ones that are homemade taste a lot better since the coconut is freshly grated and even the jaggery is molten which makes the Modak even more palatable. Since then Modak had become an on demand delicacy which Amruta gets for me every time she’s back from home and like Po these sweet dumplings always manage to uplift me incase I’m in one of those sulky mood.

Apart from Modak, there is yet another wonderful delicacy which is mainly popular in the Konkan Coastal region of Maharashtra.Known as Solkadhi – This soup is prepared from coconut milk and Kokam, and is a specialty of the cuisine from the coastal region. It is said that if you ever visit the Konkan region, Solkadhi is a must have dish. This is usually eaten with rice or sometimes drunk after meals. ‘Sol’ refers to ‘Kokum’ or ‘Amsool’. It comes from a fruit bearing tree called Garcinia indica. The fruit from this tree is dried in the sun to get ‘kokum’. Since most of the Konkan homes have this tree in their backyard and as well as the coconut tree, solkadhi is a largely enjoyed and is a  key component in coastal meals.

In spite of coming from a coastal state myself, the use of coconut in both these Maharashtrian delicacies amazed me. But then I think that’s the beauty of food, isn’t it? You can give an ingredient as common as a coconut to a dozen different people hailing from a dozen different regions and cultures and you would discover a dozen different gastronomical affairs.

City Itinerary: How to travel well in the Vatican