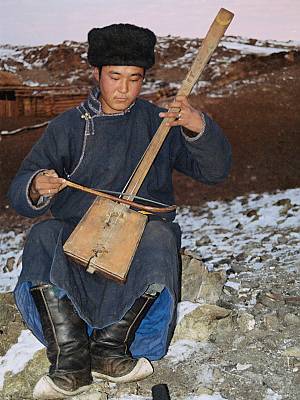 Cultural Heritage The Mongolian Tuuli
It is being managed by Cultural Heritage Center, Ministry of Education, Culture and Science of Mongolia.
It was Inscribed in 2009 on the List of Intangible Cultural Heritage.
Mongolian epics were spread all parts of Mongolia; western, eastern, northern, eastern and central regions. Currently, the range of distribution is limited only the western region, specificially Duut soum of Khovd aimag and Malchin and Naranbulag soum of Uvs aimag, in addtion to Ulaanbaatar city.
Although there is no national law or act particularly focusing on the cultural heritage in whole, there are national laws regarding the protection of cultural heritage. The fundamental legislative act on the given theme is the ‘‘Law on the Protection of the Cultural Heritage, approved by the Parliament of Mongolia in 2001. This law is based on the other previous legislative instruments, such as The Constitution of Mongolia (1992), the State Policy on Culture (1996), the Law on Culture (1996), and in connection with the other laws in the field of culture, education and arts.
The Mongolian Tuuli is an oral tradition which comprises of heroic epics that run from hundreds to thousands of lines and combine spells, idiomatic phrases, fairy tales, myths and folk songs. They are regarded as a living encyclopaedia of Mongolian oral treaditions and immortalize the heroic history of the Mongolian people. Epic singers are distinguished by their prodigious memory and performance skills, combining singing. Epic lyrics are performed to musical accompaniment on instruments such as the morin khuur (horse-head fiddle) and tovshuur (lute). Epics are performed during many social and public events, including state affairs, weddings, a child’s first haircut, the naadam (a wrestling, archery and horseracing festival) and the worship of sacred sites. Epics evolved over many centuries, and reflect nomadic lifestyles, social behaviours, religion, mentalities and imagination. Performing artists cultivate epic traditions from generation to generation, learning, performing and transmitting techniques within kinship circles, from fathers to sons. Through the epics, Mongolians transmit their historical knowledge and values to younger generations, strengthening awareness of national identity, pride and unity. Today, the number of epic trainers and learners is decreasing. With the gradual disappearance of the Mongol epic, the system of transmitting historic and cultural knowledge is degrading.

Memory of the Khmer