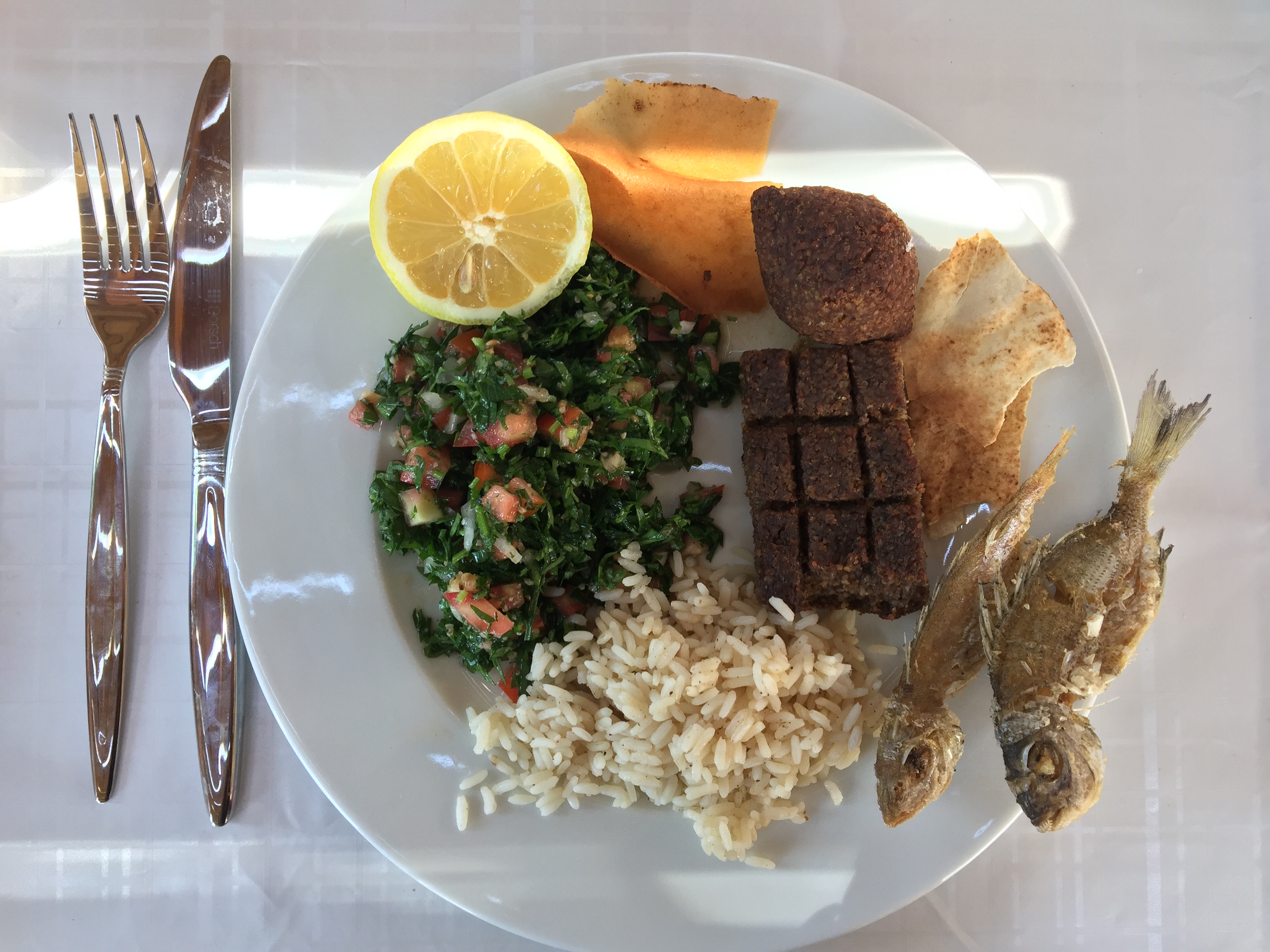 As far as I know, everyone I met has heard about Taboule and Hummus. Initially these dishes are affiliated with the Middle East. However, Lebanon has got the biggest share of the reputation since every Lebanese mom is known for her Taboule and her Hummus. Moreover, these dishes above are known as “Mezze” which means appetizers;  and its usually served first in every Lebanese house specially on Sundays. Sundays are dedicated to big family gatherings, never ending feasts and mothers competing over the best dish. To be fair, Lebanese food has had its share internationally since every tourist leaves Beirut with a cooking book; and for the people who haven’t tried it yet, I’d suggest they go for a run since they will be consuming a lot of calories. The Mediterranean cuisine  is a celebration of life; it is intense, savory, diverse and refreshing.  The meals are a combination of earth and sea which makes your taste buds crave it continuously.

Beef is the main ingredient in a lot of Lebanese dishes. Used as a topping for Hummus, stuffing in pastries and vegetables, even mixed with rice and filled inside chicken.  Beef is also a main dish during the meals since it comes after the serving of “Mezze” in it’s very simple presentation and juicy taste. It is known as “Machewe” or simply “BBQ”.  The Lebanese “BBQ” is a mixture of ground Beef, Chicken and Kafta (meat mixed with parsley and onions) served  together with grilled tomatoes and onions inside the traditional bread. It is cut into cubes, marinated in olive oil, lemon, garlic, salt and pepper. These chops supported by wooden sticks are ready for the grill. Since the Lebanese cuisine focuses on Beef and Vegetables I decided to highlight one of the main dishes that combines the taste of these ingredients. Usually accompanied with Arak, (Traditional alcoholic drink) “Kebbeh” (Arabic: كبة) is basically the most prominent  Lebanese dish. Kebbeh is served many ways:  fried Kebbeh, grilled Kebbeh, raw Kebbeh, Northern and Southern Kebbeh, Kebbeh in the pan, Kebbeh patties ….etc Originally Kebbeh was made by hammering meat inside a stone bowl, then mixing in spices and soaked Bourghol.  With the invention of the electric grinder and food processors the traditional way has disappeared except in the rural villages. Looking back at the history of the dish, it is identified by the excessive use of crushed wheat and I believe it has been consumed in the mountains of Lebanon for hundreds of years. Being the main ingredient, Bourghol is rich in vitamins, and magnesium, and has been part of the Middle Eastern cuisines since forever. Considered as one of the oldest processed foods worldwide, a lot of civilizations were known for eating dry wheat.

The ingredients vary in every village, but the main ones remain almost the same.

Depending on the choice of Kebbeh, cooking methods may vary.

Mixed all together, the raw composition can be eaten as it is brought from the butcher and grinded with onions and Bourghol with seasoning. Served with olive oil and fresh mint leaves it is served on an icy plate in order to keep it fresh. However the exact mix can be spread in a tray and topped with cooked meat, covered with another raw meat layer. On a temperature over 200 degrees, it takes about 35-40 min in the oven, Kebbeh can be served with greens or fresh yogurt . The same mixture, shaped into spheres and patties placed in a frying pan for 3 min and flipped continuously, changes to a brown color and is dipped with fresh yogurt and bread. Rural villages have their own food traditions; In the Northern villages Kebbeh is baked differently. In Zgharta a village in the North of Lebanon, traditional Kebbeh is distinguished by its bulky size and round cap form. The Kebbeh is stuffed with a lot of  ingredients  depending on the taste, but mainly garlic, mint, onions and animal fat that has an extreme lipid  composition . Don’t be fooled by the fact that this dish is grilled, it stands far away from the healthy sector of the pyramid since the chunks of animal fat melt inside the tennis ball-sized and are heavily dissolved inside the juicy beef texture. The South’s traditional Kebbeh consist of balls of beef overstuffed with butter, pepper and nuts. It is also famous for the intense mixture of spices, cumin based, but mixed with many other herbs and spicy blends. Kebbeh b Laban, is Kebbeh merged in hot yogurt dip and boiled over low temperature, usually served hot. Kebbeh Arnabieh is elliptical shaped and mixed with citrusy flavored sauce. The Armenian community has its version of veggie Kebbeh as well. Made with onions and parsley mixed with lentils. There’s always the tricky Kebbeh, that is a mixture of potatoes and Bourghol with mint and parsley. it is called Kebbeh since it does represent the mixture replacing beef with potatoes. During the Easter holidays Kebbeh Hazineh(sad) is cooked; prepared during the holy week and specially on good Friday. it is made from pumpkin fillings instead of meat. Personally, I enjoy eating fried Kebbeh. The crispy skin, dipped in fresh yogurt with chunks of cucumber and dried mint makes you crave it even when you’re full. We believe that food should be cooked with love and passion. Anyone preparing food should do so with a warm spirit in order to have the flavors fuse your taste buds. When you come across any Lebanese, the only Kebbeh he is going to offer you is his grandma’s. It does get competitive between families over the best recipe; but though everyone cooks with devotion and love.

Nevertheless, my grandma does it better, trust me!