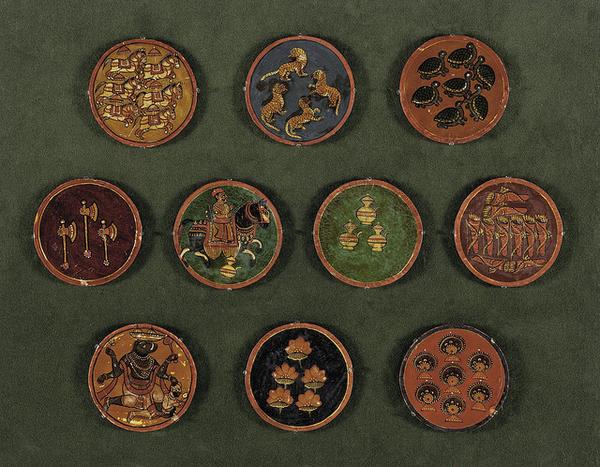 We remember the Mughals for their majestic contribution to the Indian architecture. The monumental treasures built by them such as the Taj Mahal, the Red Fort, Fatehpur Sikri, Biwi Ka Maqbara are till date visited, appreciated and have become an important part of the Indian heritage. The Mughal Kings had a special fondness for art and architecture. However, amongst their many pastimes and hobbies was an interesting card game called the Mysoru Ganjifa.

Deriving its name from a Persian word, Ganjifeh which means playing cards, the Ganjifa card game was played heartedly across India during the medieval times. Each region in the country had its own form of this art namely, Sawantwadi Ganjifa from Maharashtra, Navadurga Ganjifa from Orissa, Rajasthan and Gujarat Ganjifa , Kashmir Ganjifa, Nepal Ganjifa and finally, the Mysore Ganjifa, patronized heavily by Mummadi Krishnaraja Wadiyar ruler of the bygone capital of the Karnataka state-Mysore.

The Ganjifa cards can be found in various sizes and shapes, but the most common indigenous card is circular in shape, while some sets are found in rectangular and square shapes. A Mysoru Ganjifa deck contains either 96 or120 cards. It is said that the card game was conceptualized to teach, learn and tell stories and shlokas from the Hindu Purana, stories from the Ramayana, The Mahabharata, among others.

The Ganjifa card game did not only have significant cultural bent, but it was used to bring people together for a social purpose, entertain and encourage a socio-cultural theme. The game was not only played by the royals but also by the commoners in their dwellings. The only difference was that the aristocrats commissioned cards made with expensive material, commoners and artists in general used the more affordable material such as waste paper and fabric. A variety of items like ivory, shells, leather and paper based cards were in use on which artists used to paint by using super-fine brushes and natural colors with a wide range and saturation.

The Ganjifa game also had a religious connotation. People chanted the name of the deities while playing these cards, creating a spiritual atmosphere around. Mythological symbols and deities were pained intricately by the artists on to the cards, and the Ganjifa art surpassed the delicacy, richness, colour, novelty and most importantly, expression.

A fun, intelligent and a brain-teasing game, Ganjifa art enjoyed much popularity in medieval times, however its name and fame has been in decline now. With the fall of blue blood kingdoms and empires, the Ganjifa artists have not only lost patronage but also acknowledgement. With the rise of the digital era and the influx of modern printed cards (52 cards per set), today the Mysoru Ganjifa has fallen into oblivion, with hardly any demand. The Ganjifa cards are hardly sold in any shops today, and whatever little need does arrive of it, is fulfilled through placing orders with Ganjifa artists, which too remain meager in number.

“No one knows exactly how to play Ganjifa. The current digitally-hooked generation isn’t interested in such traditional games nor is it interested in the pure art form,” said  Mr Narasimhan, superintendent at Sri Jayachamarajendra Art Gallery, in an interview with Deccan Herald.

There have been a few efforts to revive this medieval art form by Ganjifah artists such as Mr. Raghupati Bhatta, who exhibited their work in a museum in Srirangapatana in Mysore. But due to lack of any financial support from the Government or patrons, it was shut down in 2000. With little hope, Mr. Bhatta shifted his paintings to a smaller studio in Mysore. He then dwelled into extensive research and focused study to attempt the revival of Ganjifa. Much appreciated for his work, is one of the pioneers of Mysoru Ganjifa.

Today, some centers in Karnataka and Tamil Nadu do organize workshops for making people aware of this splendid art form. The Ganjifa Art Gallery set up by the Hasta Shilpa Trust, Manipal in its Heritage Village, presents a comprehensive spectrum of ganjifa themes and style in practice.

Janin Wise, a card game fan from America and also a member of SCA (Society of Creative Anachronism) that promotes medieval recreation, has done extensive research on the Ganjifa art. She feels that it is disappointing that such phenomenal art is not appreciated in the country of its origin.

Wise stumbled across a kick starter for a Ganjifa set and saw that she could order the product from Amazon.com.  When it arrived, she was incredibly disappointed at both the quality and art work.  “If this was the only version people outside of India would have access to, then I needed to do my best to correct that, because it should be a beautiful, playable game,” she says.

“Ganjifa draws on the artistic style of India, combining specific color palettes, and symbolism with intricate and delicate detail.  It’s a folk art, which tends to be very much tied to -where- it is made.  The making of it is both a testament to patience and skill- from making the disks and preparing them, to the actual individual hand painting, it is a lengthy process to create beautiful, individual pieces of art …that are then meant to be shuffled and actually used,” says Wise.

As her own effort to revive the old card forms, Wise has made a PDF version of each game she has researched available for free online to anyone wishing to learn to play or actually play.

While it is incredibly heartening to see enthusiasts like Wise making an effort to revive an art form that’s core to India, it is also disappointing to see that Indian culture and heritage doesn’t get the deserved applause back home.

However, as we continue being influenced by globalization, one must always hold in high esteem its own traditions and respect for its regional art forms. The Mysoru Ganjifah is just one example of the many Indian art forms that slowly dying a tragic death. So many Indian art forms are not commercially viable in their own country of origin and something must be done to bring them back to life. Awareness is the first step, generating a demand, the next.

Art forms in India like the Mysoru Ganjifah should be given some reverence, otherwise it won’t be long before our generation forgets not only them, but maybe even the Indian mythology, the sole reason why they were created in the first place.