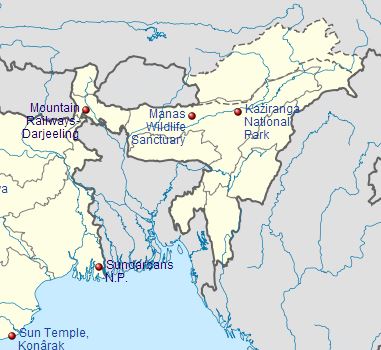 My travel itinerary starts from Shillong. It covers 5 World Heritage Sites within a span of 13 days.

After Breakfast visit Elephant falls and Shillong peak. After lunch, we will take 7 hours drive to Kaziranga National Park, the home of the Great Indian One horned Rhinoceros. Other residents of the park include elephants, Indian Bison, four species of deer, tiger, leopard, capped langur, wild boar, hoolock gibbon, hornbill, ibis, cormorant, egret, heron, fishing eagle and a host of migratory birds including Pelicans. We check in at resort/ tourist lodges.

Manas Wildlife Sanctuary, situated at the foothills of Himalayas in the state of Assam, it is about another 6 hours of drive from the Kaziranga National Park. So we start on the morning of day 3 as it is highly dangerous and unsafe to be travelling on the hilly terrains of the Himalayas. After reaching there, one can stay at stay at Mathanguri Forest Lodge. It is 20 km inside the forest and just on the bank of Manas river. Bhutan Manas Royal Reserve is just 5 minutes walk from here. No passport is required for Indians.

The best time to roam around any natural site risch in flora and fauna is the early mornings, same goes for Manas. Most of the animals are also tough to spot during early mornings. Mixture of both grassland and woodland, situated in the foothills of himalayas in the bhutan border it is one of the best places for bird watching and viewing different animals in big herds. elusive capped langur is seen very often, along with big mammals like elephants, gaur, wild buffalo, hog deer, barking deer and occasional tiger, leopard. In mid april we have seen elephant herds measuring 40-50, about 60 gaurs, leopard cat, and a black panther for a split second. as for the birds we have seen great hornbill, oriental pied hornbill, kalis pheasant along with 100 other bird species. To feel the jungle stay in mathanguri tourist lodge, take a cold bath in nearby manas river.

Day 5: Mansa to Mountain Railways of India via New Jalpaiguri

After a full nights rest at the Sanctuary Lodge, leave early morning for the New Jalpaiguri, the nearest station. The Darjeeling Himalayan Railway toy trains starts from NJP. It is advisable to board the train while going uphill as it starts uphill at about 10 in the morning, hence with the glaring sunshine, more delightful for the eyes. The journey lasts for about 150 minutes. And one reaches the Darjeeling at about lunch time. However it is necessary to plan for the toy train travel well in advance as the booking charts are generally busy for about two months from the present date right through the year. After reaching Darjeeling, the day can be spent roaming in and around the tea gardens, the famous one being Happy Valley Tea Garden.

Early morning sunrise at the famous Tiger Hill acts as a refreshing start to the day, followed by a touring other sites including Padmaja Naidu Himalayan Zoological Park, Dhirdham Temple, St. Andrew’s Church and War Memorial. If one plans to return to NJP via the toy train, then you have to plan accordingly and have to catch the train right after having your lunch. By this way you would reach the NJP station by the evening.

There is only one late night train from NJP to Sundarbans at 9:15 PM (Paharia Express), so let us assume that we stay the previous night at some hotel at NJP and catch one of the four early morning trains from NJO to Howrah, a journey of about 10 hours. With so much of travel, a rest for the remaning portion of the day is advisable.

Then from Kolkata one has to share a taxi to Sundarbans which is another two hours drive. One can travel directly from Kolkata by road or can travel by train from Sealdah to Canning and travel by road from Canning to reach Godkhali. Godkhali located just opposite Gosaba Island and Gosaba is the last inhabited islands towards Sajnekhali Wild life sanctuary and Sundarban Tiger project area of Sundarban reserve forest. Must see places to visit when you are in the Sundarbans:

All these can be covered in varying lengths of time; in a 1N 2D package you may be able to cover 2 – 3 watch towers.

And the evening could be used to get back to Kolkata

There are few early morning trains but majority of them leave around lunch time from Howrah station. Average time from Howrah to Puri is about 10 hours. Since it would be late evening by then, one has to spend the night at Puri.

An hour ride from Puri would land you at the Sun temple. The chief attraction of Konark is the Konark Sun Temple, which is also the most popular tourist spot in Orissa. It has been declared as World Heritage Site since 1984. The temple has been structured in the form of a giant chariot, featuring 12 pairs of wheels. The wheels are 10 feet in diameter, each signifying a single month. The chariot is pulled by seven horses. Two stone curved lions have been built near the entrance of the temple. You need to ascend a flight of steps to approach the main entrance. The temple features a three-tiered pyramidal roof admired by a nice looking spire. The temple is renowned for some exquisite stone carvings that admire the entire structure. The temple visit would roughly take up your entire day, and one would be able to reach Puri by late evening.

The usual trains would take about 10 hours from Puri to Howrah, so early morning starters would reach Kolkata by evening. So keeping aside a few hours for change over, one can board any of the late night trains for Guwahati, which is another 18 hours from Kolkata. One would reach Guwahati by afternoon on the next day. You could take a cab directly from the station to Shillong which would take another 4 hours since it would be an uphill journey.