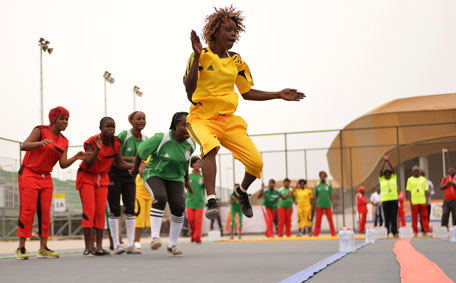 Nzango or Dzango meaning ‘foot dance’ in the Lingala language, is a unique traditional style of sport that originates from the north of the Democratic Republic of Congo (DR Congo) pre-1960 independence. Originally Nzango was a dance most popular amongst young females, traditionally played on the streets, and on school playgrounds. However recent years have noticed a huge surge in popularity for the game; with it now being extremely popular amongst females of all ages, and its official certification as a national Congolese sport. Promoters of the game are now even pushing for Nzango, to be recognised as an official Olympic sport!

Nzango now holds a multitude of tournaments with seventy teams in the last three years being formed in the eastern DR Congo alone! The game is also spreading reaching popularity in African countries such as Gabon and Cameroon, with the sport demonstrated at the 2015 All Africa Games, in Brazzaville, Republic of the Congo.

Nzango is also increasingly seen as an important unifying socio-political tool that unites both the DR Congo and its neighbouring country the Republic of the Congo, from bi-communal disputes. The fact is that Nzango is now here to stay, and as a Congolese female, I feel extremely proud that this game is unique to the DR Congo.

“The Mafia Kills only in the Summer”

Review – Is history repeating itself in DR Congo?