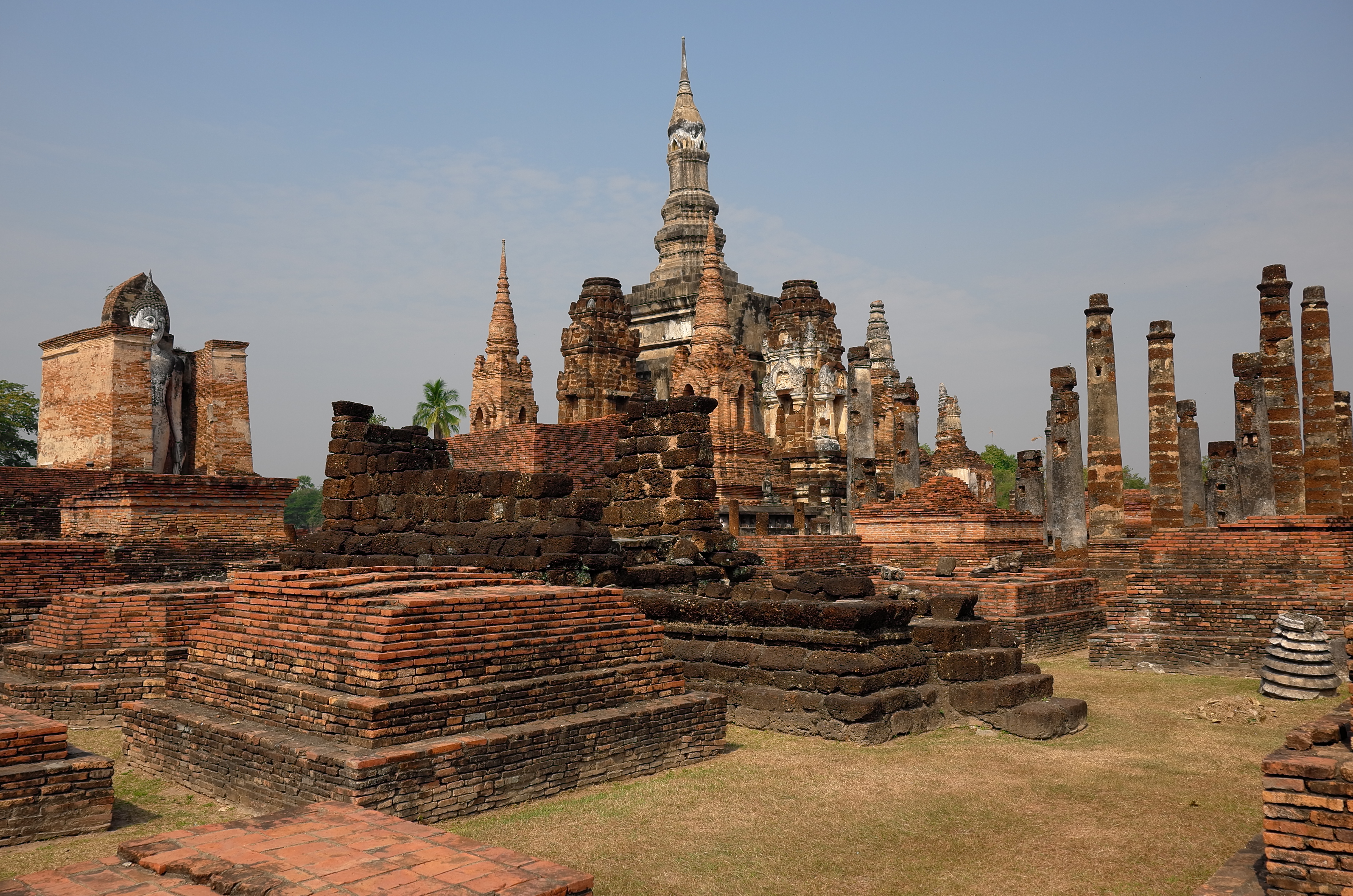 During the 13th century, and after he won the war against the Khmer, the Thailand prince Bang Klang Thao founded the very long dynasty (150 years) of Sukhothai (1238 ac.). Sukhothai means « the birth of happiness » and come from Sanskrit (the language from Theravada Buddhism). It’s a perfect name for such a place when you can watch the sunrise floods this set of temples, Buddhas and remains from the first Siam Kingdom capital.

Before to admire from closer and walk or bike inside the park, it is a must to say « Hello to the sun », in a top of a high hill, together with a 12 meters Buddha, for sunrise, early morning. Located west, outside the old city, the Wat Saphan Hin is indeed the perfect place for such a beautiful moment but you would have to climb the 200 meters hill before. Nice anecdote : it seems that the King Khamheng was going to this place, on new moon, riding elephant, to tribute this Buddha. Walking – or better biking – in Old Sukhothai (the new town is located 12 kilometers away), at sunrise, it is like traveling through ages, eight centuries ago and believe to be somewhere in a beautiful dreamworld, made from legends and myths. The light is amazing and the ruins impressives from their architectures, details, ornaments, sitting, standing and walking Buddhas. If we have to remember two kings from Sukhothai dynasty, they are ; King Phra Ruang, which one could had supernaturel powers but above all ; King Rama Khamheng (the strong), known for creating the Thai Alphabet. He also established Buddhism as the national religion and started diplomatic relationship with China. Moreover, his 42 years reign has been very important for artistic, cultural and creative purposes. You must come in January to Sukhothai, when people are celebrating one of their most emblematic king. At this time, a big festival is organized by the city and it is a pleasure to look at all this colours, shows, fireworks, smells, taste all this good food and listen traditional Thai music ; so authentic ! In Old Sukhothai, it is a pity that the wooden temples and palaces did not survive through centuries but you wont be disappointed by the brick ones. So much beauty, magic and history behind those walls. The nature is fantastic too, with lakes, wonderful trees, plants such as cute lilies. Nature stands like the final touch in a surealistic masterpiece. To quote Auguste Rodin, « Nature is the supreme taste » and it seems that in Old Sukhothai, Nature makes human constructions even more beautiful ; it is not the way around ! In any case, there is an obvious osmosis. The old city, surrounded by alsmost 7 km battlements, is still inhabited on the east side. The ruins and remains are everywhere but the center is the most interesting and impressive part of Sukhothai. More ancient treasures are located outside the old city and people are very happy to visit them using a small motobike. I like to show you more pictures so you can eventually jump into the first plane to Thailand, visit Sukhothai and those exemples of temples : The Wat Mahathat It is the royal temple and the most important of Old Sukhothai. It seems that one hair and one vertebra of Buddha himself stayed there for a while.

The Wat Sri Sawai Founded during the Khmer domination, this temple as the same architecture as the ones in the beautiful Angkor Vat (Cambodia).

The Wat Sri Chum Located at the North of the old city, with a huge 14 meters sitting Buddha. It seems that back to the past, a king counselor could climb up, thanks to tiny stairs, and talk to soldiers pretending it was Buddha himself, in order to give them courage.

The Kalemegdan, a fortress that survived through centuries..!