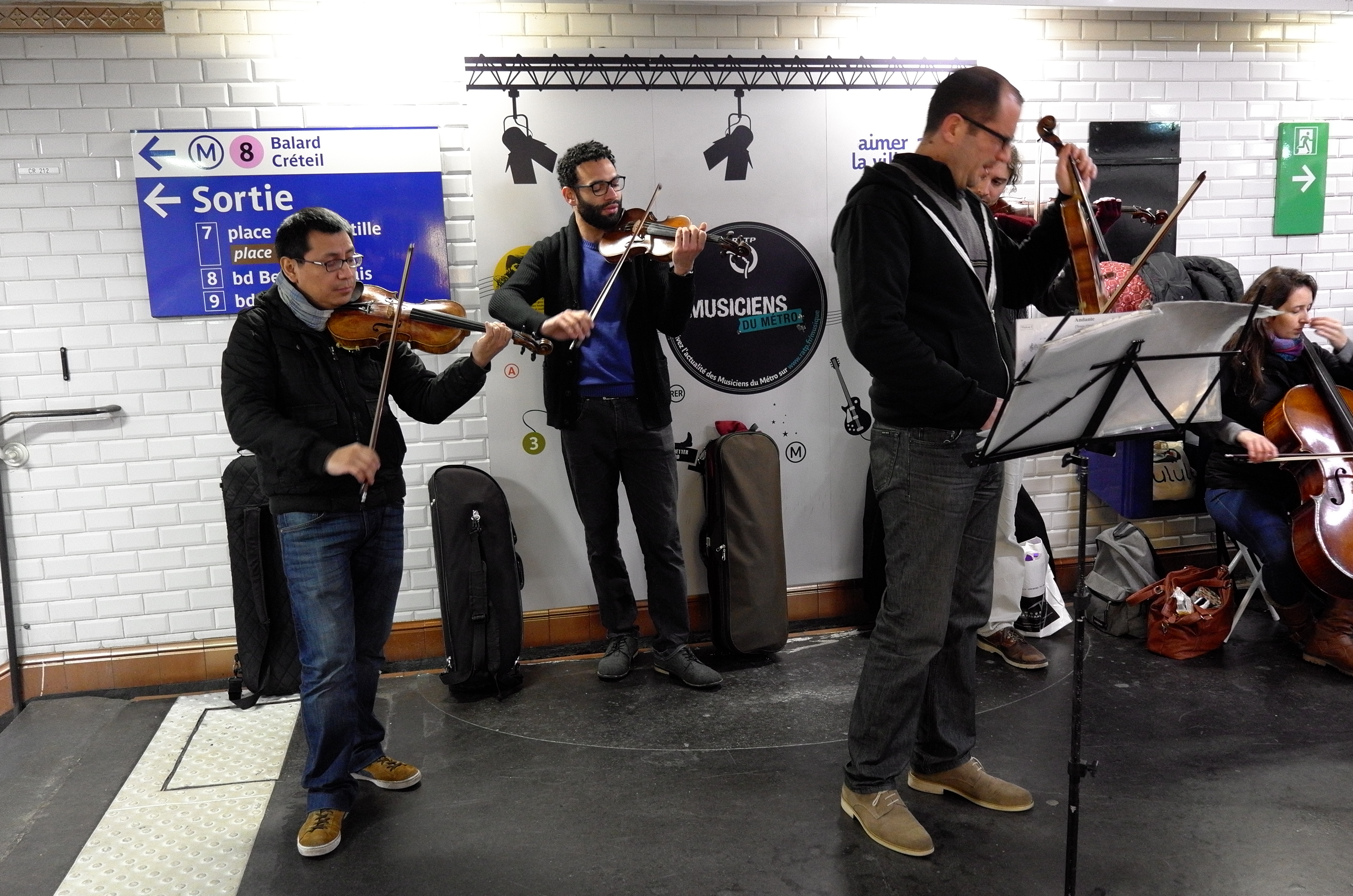 There is one thing I like so much in Paris ; the Metropolitan. Despite the fact that it’s a smelly and dark place, noisy and crowded, the Paris Metro is fascinating, full of interesting details, scenes, happenings, stories and people. With 5 millions users a day dispatched over 300 stations, you can observe every single groups of populations. The stressed ones – late for their work – the lazy ones and sleepy ones – coming back from parties – the families, the lovers, the eccentrics and so on. The subway is trully the best sample to study Parisians behaviours, ways of life and habits ; a city under the city!

Therefore, I chose to investigate a great initiative, the label Espace Métro Accords (EMA), created in 1997, and promoting performing art such as music and dance, inside the Metropolitan. In addition, I spent 2 hours walking through the subway, meeting artists and questioning them about their experience as Metropolitan Musicians.

In order to understand the creation of such a great performing art initiative, we have to go back in 1973. Back in the days, a survey, ordered by the RATP (Régie Autonome des Transports Parisiens) – the public organization responsible for the subway exploitation – stated that the Metropolitan was a sad and seedy, but efficient public way of transportation. The awareness was strong so the RATP started to think and avoid a simple highway to hell, for the Metropolitan users.

In 1977, the successful Métro Molto Allegro is created. It is the first musical event in the subway. Hundred musicians have performed over 20 different stations. The final, in Auber, has attracted more than 5.000 spectators. After that, the RATP will allow musicians to perform in the Metropolitan, without any dedicated structure. Between 1989 and 1997, hundred artists a year have been accredited to play and “the first to come was the first being served”.

The Paris Metropolitan is part of the french folklore as well. Great singers such as Serge Gainsbourg, Jacques Brel and Edith Piaf have been inspired by the subway. Created in 1900, for the Exposition Universelle, the Metropolitan helps now, talented artists to arise and start a successful career. Keziah Jones, Ben Harper and Manu Dibango are very good examples of worldwide famous artists who started their career in the Paris Metropolitan. For pleasure :

Ben Harper – Diamonds On The Inside

Finally, in 1997, a proper structure is created to manage the music in the subway ; the Espace Métro Accords (EMA). Nowadays, it is a real music label with three main aims :

Over the years, the EMA worked with huge french festivals such as Rock en Seine, Solidays and Art Rock, as well as TV show on W9 channel and also with famous artists who give the opportunity for talented musicians to play on prime time concerts.

Over the years, the EMA received more than 10.000  applications, run more than 4.000 castings for 3.000 delivered accreditations. One accreditation is valid for 6 months and should be renewable twice a year. For musicians – mostly professional and semi-professional – the subway is a good opportunity to test their repertoire and the acoustic in the corridors is amazing. Furthermore, it is always possible that they will be spot by a music agent walking through the Metro!

Actually, I was myself accredited by the EMA in 2013, and I was allowed to play – Clarinet – in the Metro. During 6 months, I played, mostly for the fun and I remember the rules were rigorous. It is such a melting pot of different cosmopolite artists and music style that you must respect those rules to avoid chaos. They state where and how you can play without disturbing travelers because the main goal is to make them happier ; not more stressed than they already are.

Yesterday february 12th, I crossed the Metro during 2 hours to meet musicians, talk to them and ask them a couple of questions :

Diary : 15:30 – I leave my house and get in the metro line 6 – Glacière station, direction Montparnasse station  The first music I hear is chinese, one man is playing Erhu – a two stringed bowed instrument music. Unfortunately, before I had the chance to talk to him, I see RATP security guards asking him to stop. He is actually an “illegal musician” without accreditation. I told you the rules were strict, it is a pity because the music was beautiful.

15:43 – I continue walking and meet a Saxophonist, playing Jazz music. Before I reach him, he was talking to other musicians, planning a rehearsal. This man looks nice – kind of “straight out from New Orleans – with dreadlocks and fashion hat. He sees me with my camera in hands and we start talking about photography. Later on, he explains that music is his main activity but not only in the subway. He is doing that since a long time – with no more precisions – and his best memories are when people dance listening his music.

16:02 – I get in the subway direction Châtelet station, line 4. This time I meet a bluesman ; blues gypsy music. Beautiful… Again, he stops to talk with other musicians. It seems that they all know each other, like a big music family. He wears sun glasses, old-school clothes but he was not interested to talk to me. What a pity…

16:08 – I continue my trip and get in the metro direction Hôtel de Ville station, line 1. There, I hear one of the best live spanish guitar I ever listened. The man, maybe sixty year old, looks like an old globetrotter. He is playing in the metro since the 70’s. His favorite memories ; when women smile to him, thanks to his music. He told me he plays for peace of mind but he said that the daily job is not always nice. Especially at the beginning, a lot of assaults happened. He is a man with a big heart, it was very nice to talk to him even if he did not want to be filmed or photographed.

16:30 – I get in the metro direction Bastille station, Line 1. What a surprise… I step out and start walking in the corridors when I see a string orchestra preparing their show. 12 members with violins, cellos and bass. There for 20 years ; not always the same members but always the same spirit. The bass player answer my questions while the others tune. He is a professional, not playing only in the subway and doing experimental music aside. One cello player told me he is playing in the metro since one year only. Their most memorable memory ; when an old woman use to come everyday spontaneously, to head the orchestra. She does not come anymore… I stayed a long time listening their beautifull classical music.

17:07 – I get in the metro, line 5 direction République station. I walk and finally hear some birds singing… What is it ? Odette’s Tips – the name of the band – a duo, one boy, one girl, very nice people. They play world music, with african sound. They use Djumbé, rythm box and percussions. The woman voice is absorbing. They are professional but because of personal reasons, it has been 13 years they did not play. They had played more than 900 concerts and now, they start over, in the Metropolitan, since 6 months. Their most memorable memory, when a woman come to them, showing her belly and asking if she was pregnant.. Weird !

17:25 – I get in the subway, line 11 direction Hôtel de Ville station. End of my day in the metro. It was a beautiful experience and now, I deserve a beer that I drink in the Marais. I am happy and I think “it’s what music makes to your soul and heart”.