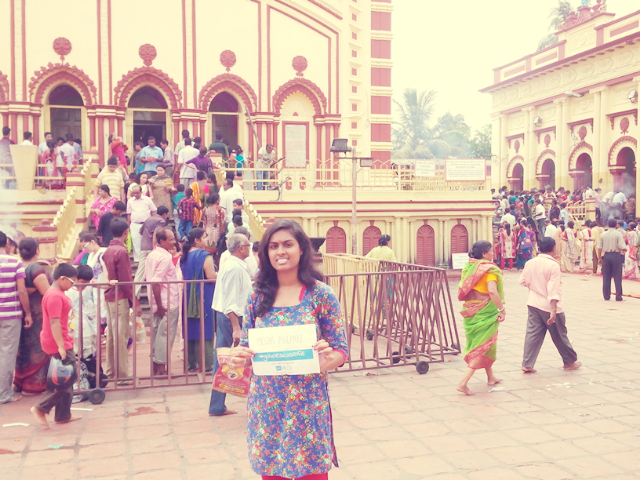 Dakshineshwar Kali Temple, a centre of international interest and national importance, is a Hindu temple built by Rani Rashmoni in 1855, in Dakshineshwar, on the eastern bank of the Hooghly river, near Kolkata. The presiding deity of the temple is ‘Bhavatarini’, an aspect of Kali Maa, meaning, ‘She who liberates Her devotees from the ocean of existence’, I.e sa Sara. It is said that Rani Rashmoni had a vision of the Divine Mother, in the form of the goddess Kali in a dream who told her to install her statue in a beautiful temple on the banks of the Ganges river where she would manifest herself in the image and then accept worship. Profoundly affected by the dream, Rani immediately looked for and purchased a 20-acre plot in the village of Dakshineshwar.

Apart from the main Kali Temple, there is a series of 12 identical Shiva temples in the Devalaya. The series of temples are divided by the Chadni(river bank) keeping six Shiva temples to the left and the other six to the right. The temples face the east and are constructed in the typical ‘Aat Chala’ Bengal architecture. It is here that Sri Ramakrishna is said to have meditated to reach enlightenment. To the north east of the Temple complex is the Vishnu temple.

The serenity in the atmosphere of the Temple offers deep solace to all those who visit. It is said that Kali Maa fulfills all the wishes of her true devotees. Tuesday and Saturday are two auspicious days when an offering or ‘Bali’ of a goat is made to please Kali Maa. The temple has a library and a small market where shivlings, rings and other religious items are available. On the way to the temple there are several shops from which one can buy flowers, sweets, tilak to be offered to Kali Maa and then conduct a small puja.

It was a wonderful experience for me. I visited the temple with my family and we were highly impressed by the simplicity. It is said,