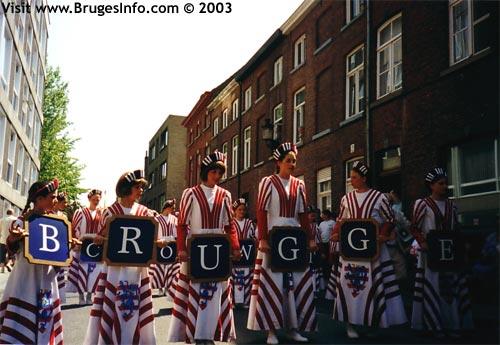 Every year on Ascension Day since 1291 the procession of the Holy Blood makes Bruges a very special place to be. Half the parade is representing scenes from the old and New Testament interpreted by guild, trades, brotherhoods and chambers of rhetoric from the burgundain period. The second part of the procession is devoted to the relic of the blood of Jesus brought to Bruges by Derrick of Alsace, Count of Flanders after the second crusade in 1150. Ever since, the precious relic has been kept in the basilica of the Holy Blood at the burg square. Carried around once a year by two prelates in a golden shrine and worshipped in this procession by the members of the noble brotherhood of the Holy blood. This impressing moment closes with the festive sounds of a mobile carillon.

The colorful pageant dates back to the thirteenth century, when a citizen of Bruges is said to have brought the Relic of the Holy Blood of Jesus Christ back from the Second Crusade. Led by the thirty city notables of the Brotherhood of the Holy Blood and accompanied by brass bands, more than 1,700 citizens on foot, in carts or on horseback perform stories from the Old Testament, the life of Jesus and the history of Bruges. Then, various civic groups venerate the relic and the procession concludes with a prayer ceremony, performed in several languages to accommodate the international audience. For centuries, the ceremony has played an important role in expressing the identity of Bruges’s inhabitants and in facilitating encounters with people from outside the city. Participants are a representative cross-section of ages, families and communities. Some inhabitants have participated for forty or fifty years, and émigrés often return for ‘Bruges’s Finest Day’.

Probably, because at that time there was a relic of the Holy Blood in Constantinople, namely in the Maria Chapel of the imperial palace of Bucoleon.This relic belonged to a whole series of relics connected with the suffering of Christ.In 1203 Constantinople fell into the hands of the crusaders. The imperial city was sacked during the 4th crusade (1204).

Baldwin IX, Count of Flanders, was chosen as the new emperor.Presumably he sent looted relics to Flanders and particularly to Bruges. His daughters Johanna and Margaretha were in charge of the county. It is likely that this is the way Bruges came into possession of the relic of the Holy Blood. Also the manner in which the rock-crystal flask is cut indicates an origin in Constantinople.

The Noble Brotherhood of the Holy Blood was founded shortly after 1400. Its purpose is to safeguard the relic and to further its veneration. Its 31 members must be resident in Bruges and, as an old document puts it, be « honorable people ».

The Provost can be recognized by his rich neckchain. On ceremonial occasions the Brothers wear a black silken tabard on which the pelican with her young is embroidered.

The oldest mention of the present procession is to be found in a charter of the Unloaders’Guild (1291). From it we learn that the guilds of Bruges were obliged to participate in the procession. Probably the Holy Blood was exhibited in the chapel on the Burg before 1291. And it is presumably from this custom that the procession originated.

From 1303 onwards one hears of a Holy Blood procession going round the city walls. Because the relic was town-property the procession was, of course, a civil and an official occasion in which horsemen, guildsmen and artisans, marksmen, city councillors and, naturally, the clergy, in all their splendour march with the relic.

In 1310 Bruges’ city council decided to combine the festivities around the Holy Blood, viz. its procession (May 3rd) and the two-week ceremonies, with the annual fair (April 23rd until May 22nd). As a result the numbers of those assisting at the procession and the devotion around the Holy Blood grew.
In the 15th and 16th centuries, profane scenes with giants, the Ros Bayard with the four sons of Aymon, as also the chambers of rhetoric of the city, were added to the biblical scenes (mystery plays). Due to the religious disturbances in 1578 it was considered safer to cease carrying the relic around outside the city gates. So, for the first time, the procession took place in the city centre and followed the course which, today, it still follows.Between 1578 and 1584, Bruges had a Calvinist regime. The procession was banned and the relic was taken to a place of safety. At the time of the Counter-revolution (17th century), and also in the 18th century the procession regained its religious character.

Floats with all kind of symbols and representations gave it a triumphal aspect. During the French rule, the procession was again abolished (1798-1819), and the relic placed again in safety. In the 19th century the procession was composed of the seven parishes of the city with their numerous brotherhoods, congregations and schools. During the 20th century a variety of changes in the themes and the presentation were made.

The procession is conceived in a style dating back to Bruges’ golden age (15th century), when Bruges was one of the most important harbours north of the Alps, and also a bustling commercial market and residence of the Burgundian dukes. During that period remarkable works of art were produced by the Flemish Primitives.

The procession of the Holy Blood tries to answer the questions every man has on the meaning of his own life and on the existence of the world. Everyone whishes to be deeply happy.

That happiness has different names, according to the cultural background, called by some ‘Nirvana’, by others ‘Heaven’, or, in the biblical tradition : ‘the Kingdom of God’, ‘Sion’ or ‘the new Jerusalem’.

The procession is divided into four parts :

The old myths tell of existential matters concerning the life of man.

The paradise, the banishment of Adam and Eve, the fratricide :
The creation was entrusted to man by God. By serving the Creator he preserves and protects creation. He gives names to all creatures and, in doing so, he becomes fellow-creator with God. But man is at the same time good and bad. The gratest sin is the pride from which envy and quarrelling originate. Because evil is rooted in man, he passes his life seeking for happiness, peace and the meaning of his existence. He is looking for lost paradise …

Erring man : Invited by God, Abraham departed from his country for a strange, but better land to begin his life anew. Abraham let himself be led by God, in whom he trusted : it’s the Covenant of God with his people.

The outcast man becomes the savior.

Joseph, his father Jacobs’ favourite son, was sold by his brothers : since humanity exists, people leave their « brother » behind. Some do not even shrink from killing their kinsmen. Joseph, promoted Pharao’s adviser, became his brothers’ savior when they were driven to Egypt by hunger. In this way, Joseph is the prefiguration of Jesus Christ, who, as outcast, brings new life to humanity.

Troughout the history prophets appear who bring to our memory Gods’ mission and the most fundamental rules of our life, viz. respect of life, justice, love for and trust in God.

The dawn of a new time. Christ was born in a carpenter’s family, in an insignificant spot and it was the simple ones, the shepherds, who first received the joyous message. It means for the searcher after truth that he has to make a complete change in his ideas if he wishes to discover the deepest meaning of life.

The three kings, three wise men, come to Jesus from different parts of the earth, bringing with them the wisdom of Western, Eastern and African culture in order to attest that Christ is the answer to the question of life’s meaning. Later on, the Child Jesus is talking to the teachers with depth and wisdom and He blesses the children because they are holy and receptive for God.

Jesus Christ gives the answer to the meaning of life
The same Jesus who is now with jubilation welcomed in Jerusalem will , a few days later be put to death. This shows that man is two-faced. Before his death, during the last meal with his disciples, Jesus delivered them his message of love which in turn they should deliver to the world. Jesus, however, will be betrayed and brought before Pilate. He is sentenced to death in order to appease the anger of the people.

After being scourged and crowned with thorns, Jesus climbs up the Golgotha carrying his cross.

He is the symbol of suffering and at the same time of the everlasting life and of trust in love. The resurrection of Jesus, the central point of the Christian faith, means He is close to all who come to Him and, in doing so, live in joy and in peace.

THE VENERATION OF THE HOLY-BLOOD:

Ever since the 12th century, the numerous brotherhoods and associations of the city of Bruges venerate and pay homage to the Holy-Blood.

Still today bishops and prelates, the clergy and the civil authorities in name of the people pay tribute to the relic.

As of 2012, there were 11 categories of sites in Belgium on the UNESCO World Heritage List. Chronologically :

Folk art of the Matyó, embroidery of a traditional community