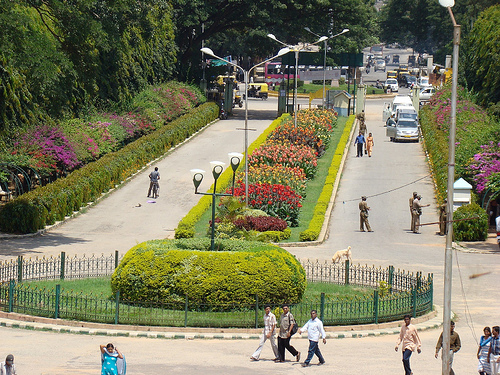 The public spaces in a city act as communal zones where people tend to spend their leisure time. Such gathering spaces encourage social mingling,recreation and create a sense of belonging among people.According to the land use standards,about 10-15 percent of the total area of a city should be dedicated to open and public spaces. The initial planning of Bangalore was conceived based on this ideology of dedicating a certain percentage of area for public spaces.

One such major public space in Bangalore is Cubbon Park located in the heart of the city.It was developed in 1870 under the leadership of Major General Richard Sankey spanning over 100 acres and has today expanded to 300 acres.The park was initially named as Meade’s Park after Sir John Meade,the acting commissioner of Mysore in 1870 and then renamed as Cubbon Park after Sir Mark Cubbon,the longest serving commissioner of the time.The park was also renamed as Sri Chamarajendra Park in 1927 to honour the rule of Sri Krishnaraja Wodeyar of Mysore state,though not many people are aware of this fact.The park houses an abundant and a rich mix of flora surrounded by numerous heritage buildings like the Attara Kacheri(High Court Of Karnataka), Sheshadri Iyer Hall(central Library) etc.The predominantly green space has a well-defined layout of motorable roads and pathways.

Another important public domain is in the city is the Commercial Street.It is Bangalore’s prime shopping destination.Situated in the central business district of the city,between Shivajinagar and Kamraj road , it has a history of 400 years.Garments,textile stores and shoes for the major part of the shops. In addition,there are stores selling artefacts, art materials, jewellery,hardware goods, sports goods and eatables. Along with the main street,interior by lanes like Ebrahim street, Dispensary road, and Narayan Pillai street also cater to the shopping needs of the public.It also houses some interesting colonial bungalows.

The Lalbagh Botanical Garden located in south Bangalore is another such public space which attracts numerous people both local and tourists.The construction of Lalbagh was commissioned by Hyder Ali (the then ruler of Mysore state) in 1760 but was completed by his son Tipu Sultan.The Lalbagh Botanical Garden is said to have been inspired by the Mughal Gardens of Sira. It spreads over 240 acres of land and houses a variety of flora.Tipu Sultan promoted the concept of horticulture. At present, the garden is under the protection of the Horticulture Department,Government of Karnataka.The four gates of the garden located at different points provide efficient access to it. A bandstand was built in the mid-1800 where the military band used to play. It also houses a lake, the glass house, Krumbiegel Hall, Aquarium building, a library block and one of the four towers of Kempegowda.

The Sankey Tank located amidst the busy areas of Malleswaram, Sadashivnagar and Vyalikaval is another public space which attracts a huge crowd.It was commissioned by Colonel Richard Hieram Sankey,of the Madras Sappers regiment in 1882 to meet the water supply demands of Bangalore.It was connected to the Miller’s Tank and Dharmambudhi Tank.It was earlier called as Gandadhakoti Kere ,as the state sandalwood depot was near the lake.The tank is well landscaped with a well-defined walking and jogging track and a children’s play area.

The various colours of Malleswaram market!!

The 50-year-old Malleswaram market situated on north-western part of Bangalore spreads over 2 acres of land.It houses 265 stores in all selling groceries,fruits and flowers. Located on sampige road opposite the Kadu Malleshwara temple,the market is always buzzing with people and gets really crowded during festivals.Recently a part of the market was raised to the ground in the name of development.