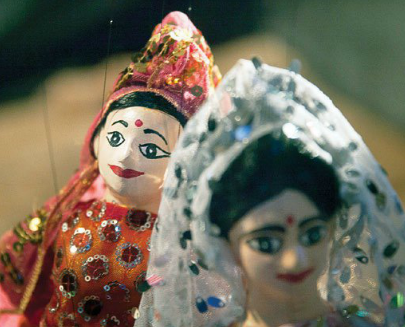 This phrase is becoming less and less common these days. With the advent of social media and internet everywhere at any time.With being able to access popular websites such as YouTube, Netflix and BuzzFeed on our smartphones getting rid of boredom is just a click away.

But the internet,websites, smartphones and televisions are all developments made in the last few decades.

But before these inventions what did people do for entertainment?

People attended attended several types of performing arts, which according to Wikipedia is defined as,  art forms in which artists use their voices and/or the movements of their bodies, often in relation to other objects, to convey artistic expression. Performing arts range from dance, music to even puppetry.

Bangladesh too has a very rich background in performing arts. These were especially popular in the rural areas.One of the most demanding forms of performing arts is Puppet dance. Although we do not know long ago the tradition of puppet dance started in Bengal, some reference to the use of puppets has been found in yusuf-zulekha, an epic of the 15th century.

In Bengal, there are are mainly three different form of puppets: rod puppets, string puppets and glove puppets. The puppeteer manipulates or controls the string puppets with the use of strings so that it appears that the puppets are dancing. And at the musicians play in the background by using instruments such as drums, cymbals and flutes. Sometimes an artist sings a song and manipulates the puppets to synchronize with the tune and reflect the mood of the song.

On the other hand, Rod puppets and string puppets are used for the present narrative plays and palagan. Some examples include the stories of Radha-Krishna. These puppets shows are very popular in contemporary social events. The primary aims of these plays is for awareness and educational purposes. The awareness of many social issues were communicated to the audience using these puppets. As a communication tool, these events were an excellent tool and were also highly entertaining. In West Bengal, rod puppets are still very popular at present.

Glove puppets dance in a pairs of male and female. Some people in the rural areas of Bangladesh still make a living simply through puppet dances. The artist holds the puppet in each hand and sings while making the puppets dance at the same time. While the stories of puranas are somewhat popular since it focuses on the entertainment value rather the religious one. In the past, puppet dances were also organized at celebrations and even at weddings. Puppet dances used to be very popular in the North of Bengal, mainly in the regions Mymensingh and Comilla, but after the partition, this folk art suffered as many Hindu artists left for West Bengal.

In order to rekindle as well rekindle this art, many puppet dance events are organized frequently throughout Bangladesh by popular Culture and heritage organizations such as the Bangladesh Shilpakala Academy.

An introduction to the Hallé Orchestra

The traditional dance in Sardinia