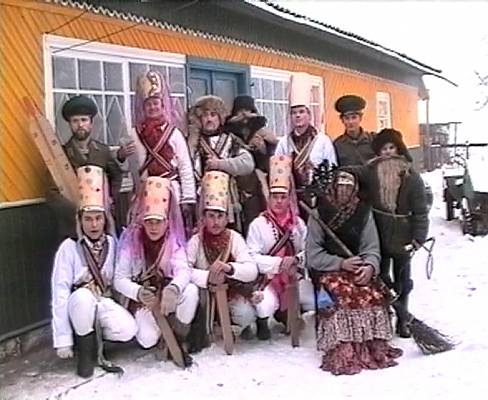 The concept of Intangible cultural heritage encompasses the idea of protecting the traditions of cultural importance and diversity. The tradition of the Kalyady Tsars or the Christmas Tsars celebrated in the Semezhava village of Belarus is one such unique festive event in the fast growing age of globalization and was added in UNESCO Intangible cultural heritage list in the year of 2009.

Kalyady- the custom of house-to-house carol-singing is a very ancient, pre-Orthodox tradition, which later coincided with Christmas and happens on 13th of January in the Kopyl district of the Minsk region, combining the festive mood of Belarusian Christmas, New Year carnival and traditional folklores with a comic twist.

About 500 men participate in the rite of Kalyady Tsars, of which seven are chosen to play the roles of ‘Kalyady Tsars’ in the national historical-religious drama ‘Tsar Maximilian’. The event includes performance by chosen seven young men who play various roles of a doctor, a musician, a drummer. During the drama, they visit the local houses of unmarried girls to give comic performances and receive good wishes and awards. The procession continues into the night, lit by torchlight.It is a cultural belief that the annual visit from Kalyady Tsars brings harmony, peace and wealth so the locals welcome the Tsars with an open heart.The performers wear traditional Semezhavan dresses and ornaments which are usually in geometric shapes. The chest of each Tsars is crisscrossed by red straps over their white shirts and trousers. They also wear black boots and high paper hats with multicolor paper ribbons. By the end of the performance, all the participants gather at one table for a late-night celebration of traditional Christmas.

The ancient tradition of Kalyady Tsars will need continuous safeguarding in this fast paced era of changing times and traditions.

A Sacred Beginning of a Journey