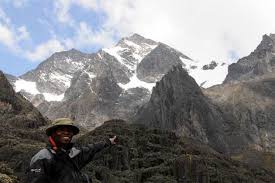 The Ruwenzori mountains in southwestern Uganda are a high well watered massif rising above dry plains. Rwenzori Mountains National Park (0°06′ – 0°46’N and 29°47′- 30°11’E), a World Heritage Site, is nearly 100,000 hectares (ha) in area, and covers most of the center and eastern half of the range. It includes Africa’s third, fourth and fifth highest peaks in an alpine highland of glaciers, snowfields and lakes which make it one of Africa’s most beautiful mountain parks. It protects five distinct vegetation zones, several endangered species and a very unusual cloud forest flora, which includes giant heathers, groundsels and lobelias, characterized as ‘Africa’s botanic big game’.

The Ruwenzori mountains are an extremely steep and rugged mountain range approximately 50 km wide and 120 km long, running south-southwest to north-northeast just north of the equator. There are twenty five peaks above 4,500 m high. Their high point is Africa’s third highest peak, Pic Margherita (5,109 m), one of the two peaks of Mount Ngaliema (Mount Stanley). The mountains are a horst of Precambrian basement metamorphosed granites thrust above the surrounding plains during the formation of the western (Albertine) rift valley. The range is tilted steeply to the west, with gentler eastern slopes in Uganda which includes about two thirds of the range. The peaks are the largest |glaciated area in Africa. Heavy glaciation has sculpted cirques and left many moraines, lakelets and bogs on the Stanley ice plateau. Above this rise the three highest peaks–Mounts Ngaliema, Speke and Baker (the third, fourth and fifth highest peaks in Africa)–which are permanently covered by snowfields and small retreating glaciers; the lower Mounts Emin, Gessi and Luigi di Savoia also retain more or less permanent snowfields. The Ruwenzori are an alpine island surrounded by dry plains. They are known for an unusual luxuriant acid soil adapted flora at higher altitudes which includes many species endemic to the western rift valley. This occurs because of the high precipitation, cloud cover and humidity combined with high levels of ultraviolet insolation and the low diurnal temperature variation. There is marked vegetation zoning with changes in altitude. There are at least 177 species of forest birds (17.6% of the country’s total) according to Wilson (1995) including 19 birds endemic to the Albertine rift. Notable species are the bamboo warbler Bradypterus alfredi and Shelley’s crimson-wing Cryptospiza shelleyi (T) the endemic Ruwenzori turaco Musophage johnstoni, and two sunbirds, the regal Cynnyris regius and the larger scarlet-tufted malachite Nectorinia johnstonii dartmouthi. There are also 15 species of butterfly (22% of the country’s total) and a 1948-49 study of invertebrate life forms listed 60 species in the alpine zone, 25 of which were new to science. This suggests that a more extensive fauna may still be awaiting discovery.

The Ruwenzori mountains are the homelands of the Bakonzo and Baamba peoples. The Bakonzo are a Bantu-speaking people who have lived in the foothills of the mountains for many generations, and whose culture is adapted to the steep slopes and climate of Rwenzori. Fear of a powerful spirit as well as inaccessibility has kept men away from the highlands.

The Ruwenzori mountains have been known for millennia as ‘the Mountains of the Moon’. They are a spectacular if often wet and mist-hidden tourist attraction that have drawn visitors for much of this century. The high altitude flora was described as ‘Africa’s botanic Big Game’ by the botanist Hedberg in 1963 and has great tourist potential. However, as there are no motorable tracks, the tourism is strenuous. The number of tourists was 150 in 1984 but between 1990 and 1995 there were over seven thousand visitors who spent an average of five to six nights on the mountain. With the support of USAID, the Bakonzo’s Rwenzori Mountaineering Services (RMS), began to provide logistic support to visitors, including guides, paths, signposts, bridges and mountain huts to direct some income from tourism to the local people to earn their support for the Park.

The Park was closed between July 1997 and late 2000 during the unrest, and security is still an issue. There is a small hostel at Ibanda, the Park headquarters, and some facilities at Fort Portal, but visitors are encouraged to stay in Kasese town. This is the railhead of the east-west railway line across the country, and RMS has graded the road to Ibanda where mountain treks begin. However, Uganda National Parks has taken over many of the responsibilities of RMS to prevent private NGOs and companies from monopolizing the tourism trade. Trails in the lower montane forest are to be created for visitors not wanting to climb.