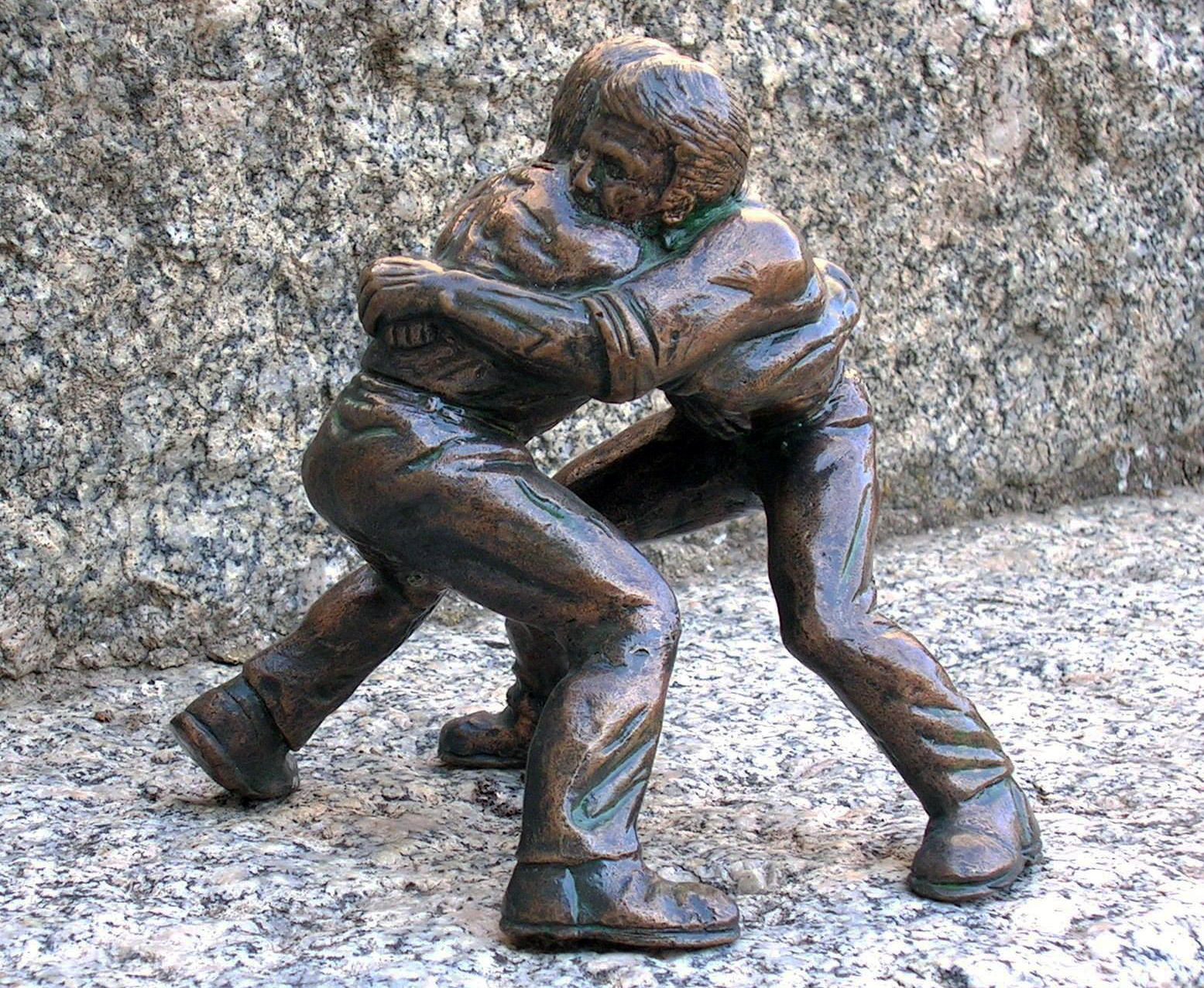 Sa Strumpa, is a ritual fight typical and original from Sardinia, Italy. The meaning of the name comes from istrumpare, from the Sardinian language, that means literally throw into the ground. Though it could vaguely remind of greco-roman wrestling, and some other celtic fights performed in France and Holland, it was influenced by numerous kinds of similar fights diffused in the island and up to Corsica and its origins are far more remote, as it is proved by the finding of nuragic bronze statuettes around the Aresu mountain and the village of Uta, representing this sport, originally from the 6th century BC and preserved at the Archeological Museum of Cagliari. These archeological finds, show two fighters, named gherradores, that try to overpower each others with the only use of their arms.

During centuries and thousands years, it was passed down orally through generations of local inhabitants together with a whole complex of uses and habits that have survived until now. There are proves from the Renaissance until the XIX century, that it was performed during collective rural ceremonies, religion holidays, local fairs, and important moments of the pastoral and agricultural ciclic life as the harvesting, threshing and shearing. At the beginning of the XX century, it was used during the conscription before leaving for the was, to recruit young soldiers and prove their abilities.

It is a pacific kind of fight, indeed it is not possible to hit the opponent in any way, brute force is not required and the only use of strength through the arm is allowed, with dexterity and equilibrium. Furthermore, the educational value was proved by the constant monitoring of adults to the children who were to play it; kids grew with the value that you don’t have to give up if your opponent is more endowed of physical force than you, but you have to duel using your agility, ability, good reflexes and slyness. Cheating was strictly forbidden and socially disliked, and the main prize was mainly to obtain the respect of its owns community. It was a fight representing not a personal value but the honor of the society, as a ritual, to prove the sense of belonging to their own people as it was performed for entertainment as a play and then narrated verbally to remind the achievements of their local champions.

There were no real written rules. It is a kind of fight to be practiced starting from a defined position is clearly indicated by a competition regulations: at the start, the wrestlers stand opposite to each other, they grip with one arm the armpit of the opponent, their right cheek touches the opposite, a hand grips the other wrist at the opponent’s back in order to tighten it securely. The knockdown is considered valid when one of the opponents lay down with his back on the ground.

In 1985, with the work of research of Piero Frau, then published in a book, the rules of Sa Stumpa were codified thanks to the testimonies of the elders and numerous federations were formed, the first official regional championship was realized and finally, in 1997, this sport was officially recognized by the CONI – Italian National Olympic Comitee, allowing this sport to grow in popularity and be taught to the new generations. It is now commonly practiced and every Year, a Regional Championship is held in the village of Ollolai with numerous athletes participating, divided by age and weight, open to men and women, children and adults.

This sport, represents the identity of a whole population, the reception of culture and communities who show their traditions globally, allowing the persistence of the heritage of ancients cultures.

In the land of basketball