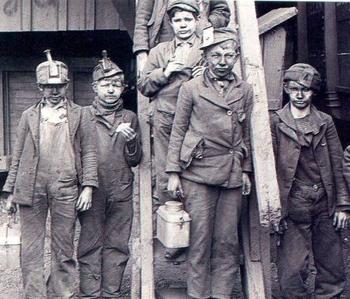 Most of the energy we use today comes in the form of electricity or oil. However, in the Victorian times the main energy source was from burning coal.  Coal was as important to Victorians as oil is to us today. Steam engines drove factory machines, locomotives pulling trains and steamships by burning coal. All this coal had to be dug from coal mines. Britain had a lot of coal, deep in rocks beneath the ground. Most coal was dug from deep mines. A long vertical shaft was dug down from the surface. Leading off from it were side tunnels. Miners rode in a lift, worked by a steam engine. In the tunnels, they hacked at the coal with picks and shovels.

The local area of Pelton was a pit village. These were villages built by colliery owners to house their workers. They were built on the coalfields in Britain during the Industrial Revolution, if an area was particularly isolated.  Pelton was surrounded with mining pits, as seen in the following 1957 map.

North East England was covered in coal mines and was the main source of employment in this area. Even children were employed in the mines! However, most of these mines have disappeared today.

The Victorians saw child labour as a normal part of working life. It was usual for children to start working underground at the age of eight, in some cases, as young as five. They would work the same hours as adults, sometimes longer, but were paid far less. They started work at 2 am and remained below the ground for 18 hours. Children would be employed as either; a ‘putter’, pushing trucks of coal along the mine tunnels, or as a ‘trapper’, who would be in charge of opening and shutting wooden doors to let air through the tunnels. A trapper boy would sit in the dark with no one to talk to and only a small candle for company.

Although the mining industry in the local area does not exist anymore, the tradition of the mining banners is still very much alive and celebrated. Mining banners are made from silk, and are rectangular in shape. They hang from a cross member and represent lodges of the National Union of Mineworkers in Durham Area. Traditionally banners were draped in black cloth, when there had been a death in the pit during the previous year. More recently, following the closure of pits across the County, they are draped with black cloth on significant anniversaries of disasters at the colliery they represent.

Residents in former pit villages have taken it upon themselves to restore and even create, banners. This has involved the reintegration of collieries that had left the Gala. The banner, held at my local Pelton Community Centre is South Pelaw Mining Banner. I contacted Dorothy Rand a local historian about why the South Pelaw banner was housed at Pelton as this was a puzzle to me and the management at the Centre. She says,
“When Pelton Parish Council was considering how to mark the Millennium we had several ideas. I suggested time-related gifts to each school in the Parish which we did, I also offered to produce a book about the Parish called”Memories for the Millennium”. Then the late Councillor Arnold Dunn suggested restoring a miners’ banner. On consulting the DMA we were told that the only local banner they had which was suitable for restoration was South Pelaw. This was acceptable because many of the workforce lived in Pelton.  The banner had some conservation work done but is now in need of more, it isn’t suitable to be taken out.”

Each year, Durham Miners Gala is held. It is known locally as ‘the big meet’ and is the biggest annual celebration of trade unionism in the UK. Around 150,000 people get involved in marching from their local mining area, carrying their mining banner, into the city of Durham. 75 groups march through the city streets and gather at the racecourse. Later in the day, there is a special miners service held in Durham Cathedral.

Remaining collieries are now museums, such as Woodhorn Colliery in Northumberland…

Mining Art
At Woodhorn colliery they have a unique collection of the stunning Ashington Group Collection of work. Featuring more than 80 paintings was compiled by the original members of The Group themselves over many years. They felt the paintings represented the very best of their work. The Group is made up of coal miners who first came together in 1934 through the Workers Education Association to study ‘something different’ – art appreciation. Their tutor Robert Lyon encouraged them to learn by doing it themselves. They captured aspects of life in and around their mining community.

Tuna fishing: An act of ritual significance in Sardinia

Periya Negamam: The village of weavers