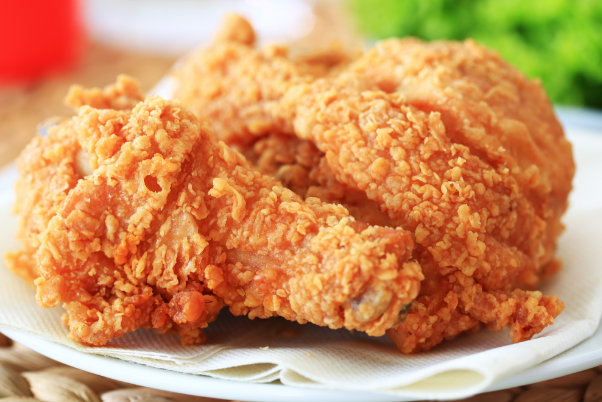 What is Southern Fried Chicken?

Southern Fried Chicken is a convenience food, comfort food, cutting edge trendsetter, and immigrant food and most importantly a finger licking good food. Southern Fried Chicken is a famous feast on special occasions. It has gradually made into U.S culture. It is a dish consisting of chicken pieces dipped in bread crumbs or floured or battered and then deep fried in oil once. It gets a crispy coating, keeping the meat moist and tender. It is usually served with mashed potatoes and gravy and makes a complete feasting dish on special occasions like picnics, birthdays, get-togethers mostly during summers in U.S.A. Also it varies from fried chicken filet sandwich, chicken tenders, chicken wings, and chicken nuggets.

What is the Story behind Southern Fried Chicken?

It is thought that Fried Chicken is only found in Southern states if U.S.A, but is also ancient cuisine culture part of countries like Egypt, Rome, India, and China made varieties of chicken dishes crispy similar to Southern Fried Chicken. Fried Chicken has been always enjoyed fritter form type food, especially fritter chicken in countries like Italy and Scotland.

In the history of U.S., Southern Fried Chicken symbolizes an essential position. Scottish families began settling during the colonization era in U.S, while settling, the Scottish brought their chicken recipes with preparation methods. Scottish people brought so called slaves from Africa. In the African cuisine culture many spices are included. Southern Fried Chicken is a mélange of African spices and seasonings with Scottish fritter  taste. This combination became a huge hit in cuisine culture and grabbed the attention and became tasty famous.

During the colonization time, slaves were given permission to raise chickens and slaves converted chicken into Fried Chicken and it became the main source of protein for slaves. Southern Fried chicken doesn’t need to be refrigerated all the time, it can be survived without refrigeration which made it easy to travel and was better than other meat. during segregation years when African Americans were discriminated and prohibited in restaurants. Gradually and eventually, Southern Fried Chicken became a tradition for “Sunday dinner” and other became popular in all other races. Currently, Southern Fried Chicken is the most popular dish in United States of America.

Southern Fried Chicken started as extraordinary event dish for some reasons. Chickens were rare; they had esteem as egg makers (which made one mull over eating them); and making this dish was exceptionally work concentrated. Today, because of the tremendous enhancements in the poultry-homestead and fast-food commercial enterprises, fricasseed chicken is one of the most effortless and tastiest things to get anytime.

Throughout the years, numerous minor departure from coatings have been advertised. For instance, in the wake of digging in flour, plunge the chicken in an egg yolk, paprika and scorching pepper sauce; then move it in breadcrumbs before broiling. Others lean toward dunking the chicken in buttermilk before flouring. Another choice is to absorb the chicken milk and lemon squeeze overnight. Another famous inclination is to infuse the chicken with a hot creation before browning.

The cooking oil is a critical element for taste and wellbeing concerns. The customary southern seared chicken was cooked in fat or a mix of vegetable oil, spread and bacon oil. In the 21st Century, individuals are more wellbeing cognizant and incline toward a lighter chilly squeezed vegetable oil that is low in immersed fat. Safflower oil is one of the most beneficial oils for this dish.

Today,  Harold’s Chicken Shack in the Chicago area, and it also made the way for successful national chains like Bojangles’, Chick-fil-A, Church’s, and Popeyes. In spite of its provincial southern association, seared chicken at long last changed into a genuine national dish despite the fact that it didn’t stop there either. Today, on account of KFC, individuals around the globe can grub on American-style seared chicken. It’s difficult to exaggerate KFC’s global impact.

The Shiitake Mushroom- A History in Magic and Folklore