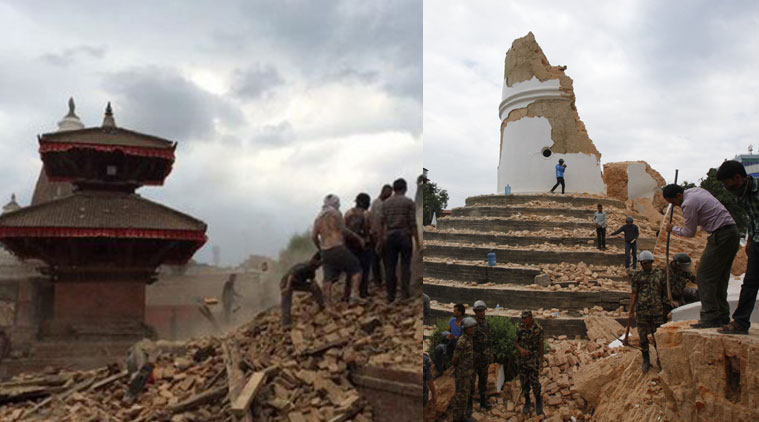 4 months into one of the biggest natural disasters ever, the focus from rescue has shifted to recovery and rehabilitation. As the extent of damage is coming to light, the need of the hour is swift action from Nepalese government and unconditional support by International communities to help Nepal stand back. But with ages of heritage turned into rubble and world heritage sites damaged, the Nepali government’s decision to reopen the sites for tourist has raised questions on government’s intent for proper recovery and rehabilitation of these world heritage sites.

The 25th April 2015’s devastating earthquake in Nepal has been one of the most horrific disasters in the history of mankind, which took more than 9000lives and left 23000 injured. The enormity of human loss and pain has been immeasurable. What has been equally shocking is the massive extent of damage to the unique cultural heritage of Nepal. The 7.8 Magnitude earthquake along with the equally strong aftershocks heavily affected the centuries old world heritage sites, causing complete damage to some of the unique specimen of cultural and historical fusion of Hindu-Buddhist Nepali heritage.

The world heritage site of Kathmandu valley has been one of the worst hit heritage sites in Nepal earthquake. The meeting point of three ancient cities of Kathmandu, Patan and Bhaktapur which dates back to 12th century now stands in rubble. The cities house more than 130 ancient artifacts, monuments and shrines out of which 7 are listed as world heritage sites with UNESCO since 1979.These are seven inimitable group of monuments and buildings, which proudly illustrate the artistic and historic feat of Nepali heritage that Kathmandu Valley once perfectly represented the distinctive and exceptional amalgamation of multi ethnic traditions of the beautiful land called Nepal.

Now the damage to the heritage sites and structures has been so much that Eighty per cent of the temples and historic structures in both Bhaktapur and Kathmandu Durbar Squares have been destroyed. The sprawling temple complex of Bhaktapur Durbar Square that was once home to royalty, originally boasted 99 courtyards ,now only six of the original courtyards remain The walls on two wings of the former Royal Palace in Kathmandu, which is now a museum, have totally disintegrated from the corners. In Basantapur Durbar Square the residence of Nepal’s royal family until the 19th century, 80 percent of the temples located there were destroyed by the initial earthquake and it’s aftershocks.

Nepal’s natural heritage, in particular the World Heritage site of Sagarmatha National Park, including Mount Everest, has also been severely affected by the earthquake. Home to some of the rarest species on Earth such as snow leopard and red panda, Sagarmatha National Park encompasses majestic mountains, glaciers and home to highest Mt. Sagarmatha (Everest). The unique geology of the region with its dramatic beauty and natural heritage makes the park one of most unique natural heritage sites of Nepal. Though the guard posts and protected area offices in several national parks in the mountains such as Sagarmatha (Everest), Langtang, Makalu and Manaslu have been destroyed or damaged beyond repair, the real extent of the damage to site however is still largely presumed because of the inaccessibility and bad travelling conditions.

While the damage to the cultural and natural heritage sites has been irreplaceable, the Nepali government has requested UNESCO teams to overlook the evaluating the extent of damage and consolidating the monuments. Mobilizing international teams and experts within no time UNESCO sent as expert mission during the groundwork stages to do an in-depth analysis and assessment of the damage and thereon formulate a comprehensive plan to recover and save the heritage sites from further damage. The strategy followed by UNESCO and Nepali government has been emphasizing on the need of community level involvement of workers and volunteers who know the places in and out. From using technology driven smartphone app to do the documentation to start training country’s young architects, engineers and historians, the detailed rebuilding and recovery plan by UNESCO will cost millions of dollars and several years.

Though the preliminary reports have pointed out the severe extent of damage to the heritage sites, the decision of government to re-open the Kathmandu Valley world heritage sites has come in the shadow of concerns and warnings from the UNESCO. As many of the monuments in these sites are still unstable, the UNESCO Office in Kathmandu has offered the general public to be extra cautious. The office has requested the Nepali Tourism board to set up safety perimeters around the damaged structures and restrict access of completely collapsed ones. As the process of salvaging the artifacts is still ongoing UNESCO believes that opening the area presents a risk of theft of art and cultural objects.

Given the importance of cultural heritage to the tourism economy of Nepal, UNESCO teams have suggested a well coordinated rebuilding programme which will incorporate and give priority to the recovery and conservation work of sites alongside giving tourists a chance to see and understand the work being done. The plan will thus be working in tandem to create a sustainable development and revitalize economy at the same time.

While every single step taken for the conservation of the sites should be hailed but Nepali government should take a leaf from Haiti Cultural Recovery Project. The project, organized and managed by the Smithsonian Institution & UNESCO (under formal agreement with the Haitian Ministry of Culture and Communication and Haiti’s Presidential Commission for Reconstruction, in partnership with the U.S. President’s Committee on the Arts and the Humanities) rescues, recovers, safeguards and helps restore Haitian artwork, artifacts, documents, media, and architectural features damaged and endangered by the 2010 earthquake and its aftermath. Making culture the motor of reconstruction the recovery programme strikes the right balance in making best restoration efforts of lost heritage and helping the Haiti to stand back on its own.

A land of stories- Tripunithura