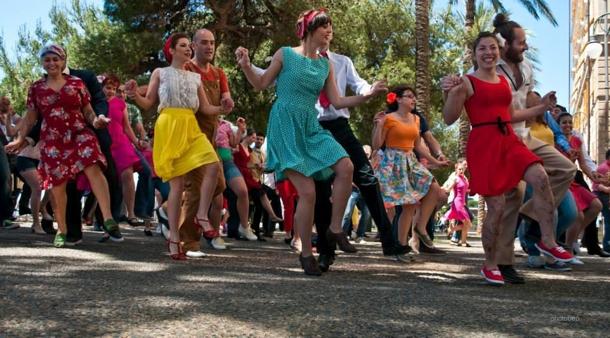 Meeting people, talking to strangers, forgetting daily worries. Or dancing a tarantella. We suddenly go back to those ancient times in Southern Italy villages when the main square was everybody’s home and dancing was one of the few forms of entertainment. The first records date back to the early XVII century, but the origins of tarantella are still a mystery. As all popular traditions it has no age and no inventor. So everybody knows how to dance it even if nobody has really been taught how to do it. Collective memory is triggered as soon as the music starts.

Tambourines, accordions, guitars and flutes keep the rhythm a fast beat while someone is singing. Men used to invite women to join them in the dance. Faster and faster their bodies get closer while they started looking at each other. The scene is performed again and again at every folk festivity. Nothing has changed, except for the fact that today women don’t wait for men to invite them, but they start dancing whenever they like. Tarantella today is just a traditional dance often associated with local products and wine or folkloristic parades to honour local patron saints and public figures. In ancient times instead, the dance was a good remedy for superstition.

According to some experts tarantella derives its name from “taranta”, the name in southern dialects meaning “tarantola” or “Lycosa tarentula”, a poisonous spider of southern Europe. So the dance was considered a therapy for taranta’s bite which could have different effects: melancholy, convulsions, psychic disease, physical pain or moral suffering. The “tarantata”, who is the person bitten by the dangerous spider, was advised to move and dance to get free of the poison. The exorcism was particularly efficient during Saint Peter and Paul festivities but everyone could do it at his own place in every period of the year. Generally a group of people would go to the tarantata’s home and start playing tambourines and castanets while the sick person was moving faster and faster, as if caught by a bout of hysteria. Tarantata looked like taranta itself, dancing in a frenzied way until exhaustion. That way music could soothe the pain and it could last for hours. Musicians could choose the right composition from a collection of twelve pieces. Then, once recovered the person should go back to the place where they were bitten and dance again for the last time that year.

Medicine explains that, as a consequence of accelerating the heart beat, convulsive dance releases endorphins, removes poison and relieves pain. Catholics instead have always tried to explain magic rituals through religion. For this reason they chose Saint Paul as the protector of tarantati, because according to legends he was bitten by a snake in Malta but was miraculously saved.

So the exorcist dance has acquired many different meanings while spreading to the South of Italy, especially the region called Puglia, and even to Argentina. During the XIX century, tarantella replaced previous local dances, becoming very popular in the Kingdom of the two Sicilies and abroad. Later those traditional rhythms inspired many classical composers for their cultured tarantella. La Danza by Gioacchino Rossini is the best composition of tarantella for piano.

Today, nobody believes in the therapeutic value of the dance anymore, which is just folklore. But we still wonder about that ancient ritual. Tarantella was a “cultural disease”, wrote Ernesto De Martino, the psychologist and sociologist who analysed the phenomenon of “tarantismo” from an historical, cultural and religious point of view in his book La Terra del Rimorso. De Martino doubts that poisonous spiders could provoke any real form of illness, and explains tarantismo as a “social disease”, a kind of hysteria tied to uncertain social and economic life conditions of peasants in the past. So the spider’s bite symbolizes every trauma or psychic, economic, social and sexual frustration. It is not by chance that tarantate generally were young unmarried ladies, social outcast who used the taranta as the only way to feel part of the community. During the ecstasy or the agony provoked by poison, women allowed themselves everything, even pretending sexual intercourse publicly. So in De Martino’s vision, the spider becomes the symbol of Mother Earth and primitive instincts woken up by pagan rituals and restrained by Catholicism. Taranta reminds of the earth, primordial sounds and ancestral life which everybody carries within themselves as a memory that sometimes comes to light.
Intangible cultural heritage asset, tarantella is the typical dance of Southern Italy.
Do have a look at it : https://www.youtube.com/watch?v=Q9DWX_cwKtM