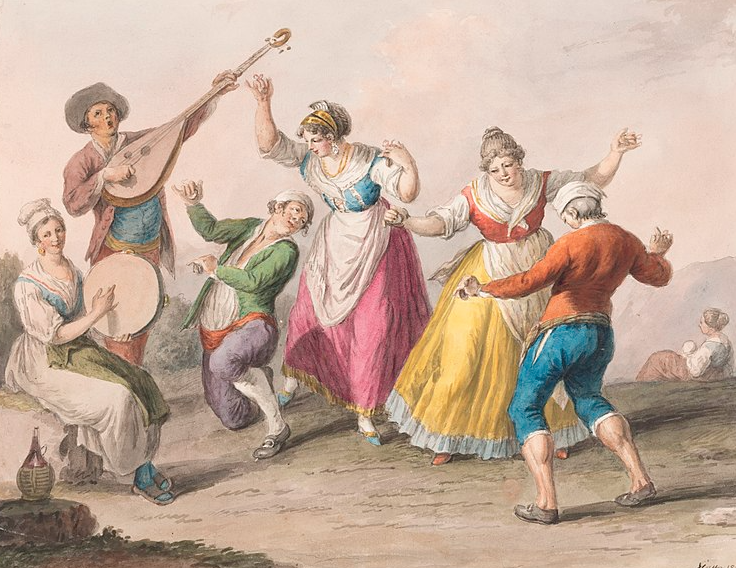 Italian culture is characterized by a large number of elements such as food, architecture, traces that history has left behind,, dances and music. The most impressive and immersive feature is possibly a combination of the last two aspects. Dancing and music in Italy purchases different connotations as applicable. It depends on the Italian region considered. Maybe the most fascinating dance is the Tarantella, which is known in the Southern area of the country and represents one of its most typical cultural elements.

The name is derived from that of a city based in the region of Puglia which is actually called Taranto. There are delightful legends behind the origin of the dance. The first origin story considers this folk dancing as a medicine: Taranto’s people thought that a good way to combat the effects of a local posionous spider (the tarantola) was to perform a magic spinning dance.

Another one possible legend refers to the dancing outbreak in Middle ages. People suddenly began to dance without stopping, and this “disease” affected men, women and children. It lasted until their collapse. The manias are recorded since the 14th century in ancient Medieval books. It is rumored that Tarantella derives from the Italian spectacle of those dancing outbreaks associated with disease.

Besides the legends, the dance was performed rampantly by the Taranto lower and the middle class, but it became so popular and famous that it spreaded into all the Southern Italian regions over time. Usually the dancing consists of rapid and light steps. The dancing is performed in couples, and it is supposed to be teasing and alluring. It is frequentely accompanied by mandolins, guitars and by a tamburine held and played by the woman. Depending on the region, it also requests typical and hand-made costumes which contribute to give charm and aesthetic appeal to these perfomances.

Lalbagh Fort- an architectural marvel of the Mughals

The Gusle: Exploring the music of Srpska