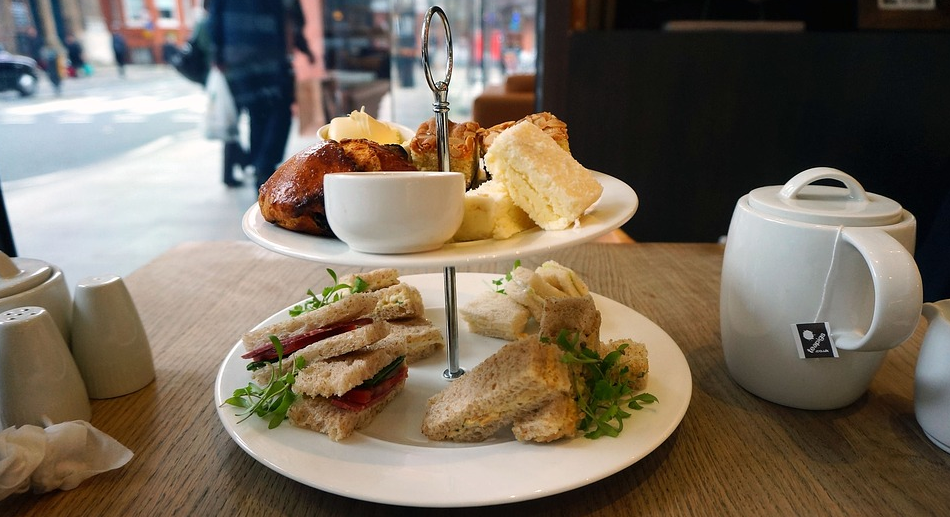 On average 165 million cups a day are drunk by the British! However, considering how tea cannot be grown in the United Kingdom and arrived relatively recently to the country, how did it become such a key part of English society? And how did ‘Afternoon Tea’ become the symbol of ‘Britishness’?
Drinking tea was actually first popularised in England by King Charles II’s Portuguese wife, Catherine de Braganza, in the mid-17th century. It all started Charles II came to the throne, inheriting a huge debt from Oliver Cromwell’s failed Commonwealth, and this was defiantly not helped by his fondness for an extravagant lifestyle and parties. Therefore, it was decided, he needed to marry a foreign princess (Catherine) with a large dowry to pay off his debts. It was this dowry, which included a chest of tea and the port of Bombay (now Mumbai), that initiated the popularisation of tea drinking amongst the first class in England.

However, it was another highly influential woman, Anna the 7th Duchess of Bedford (a close personal friend of Queen Victoria) who invented the ‘Afternoon Tea’ in the 1880’s. The Duchess simply wanted something small to eat after lunch, to satisfy her until dinner and of course, as a prominent woman in society why would she not invite her friends (from her elite circle) to join her? Thus, the ‘Afternoon Tea’ was born.

Victorian values focused around social class, status and etiquette. Therefore, as Tea was an expensive luxury, the Victorians wanted everyone to know they could afford it. Therefore, what started as a small affair of drinking tea and eating bread and butter in the Duchess’ private chambers soon progressed to the drawing room and accordingly, the Ladies began to dress for the occasion. The ‘Afternoon Tea’ had quickly turned into a fashionable social occasion.

The act of taking tea in the afternoon became an essential part of the day when summer came and the ladies decided they wanted to take ‘Afternoon Tea’ outside. This increased the new events visibility and encouraged the men to join in. The rapidly increasing popularity of ‘Afternoon Tea’ resulted in fine china being created for the occasion (sometimes even with personalised portraits on) and a small bite turned into a mini feast. Typically the meal would include a variety of sandwiches, exquisite cakes/pastries and of course freshly made scones with jam and clotted cream. Thus, ‘Afternoon Tea’ became the grand, luxury event it is today. The different courses now often served on an elegant three-tiered cake stand, accompanied by a finely decorated tea-pot and delicate tea cups with matching saucers.

Over the next few decades ‘Afternoon Tea’ became firmly established in British culture as Tea became increasingly affordable and soon all classes could take part in the new tradition. This was actually made possible because Charles II allowed the East India Trading Company to occupy Mumbai (the land given in his wife’s Catherine’s Dowry) and also granted them permission to use military force, if they weren’t Christians, on places they wished to trade with. This allowed the East India Trading Company to develop and expand the Tea trade. However, it was the invention of the teabag in 1908 which really made Tea and ‘Afternoon Tea’ accessible to the lower classes.

So what makes this ‘ceremony’ so British? (Besides from it being a delicious and fun social occasion of course) Firstly, It was actually the two recent Word Wars which solidified Tea (and associated traditions) as the ‘British’ drink. During the First World War, the government stepped in to control importation and the price of tea. Whereas, during the Second World War, the government introduced a 2oz tea ration (only lifted in 1954) for all men service and it was also used as a reward for those occupying valuable jobs on the home front. As a result, the British became very proud of their Tea and it became omnipresent in English society with tea breaks, tea cupboards, elevenses, afternoon tea, tea time etc. Therefore, from the outside observer it is clear to see how Britain can seem obsessed.

In addition, ‘Afternoon Tea’ simply personifies the romantic ideal of old English Society. A perfect representation of the fantasised stereotype of Britain’s elite; grand, elegant and obsessed with manners and etiquette. Today, people are busier so the English take part in ‘Afternoon Tea’ on special occasions, enjoying the idea that they are participating in an event past Lords and Ladies also took part in. Thus, it is just a very British thing to do.

The English are very proud of their history and place great importance on keeping past traditions alive and when ‘Afternoon Tea’ is so enjoyable this isn’t hard. Now It is normally undertaken for special occasions in people’s houses, in the garden when it is good weather or in posh restaurants/ hotels around the country. The most famous places for ‘Afternoon Tea’ being The Ritz and The Savoy hotels in central London.

The Heritage Behind Lamb

Tasting the Cultural Heritage of India Through Tea: The Story of Chai