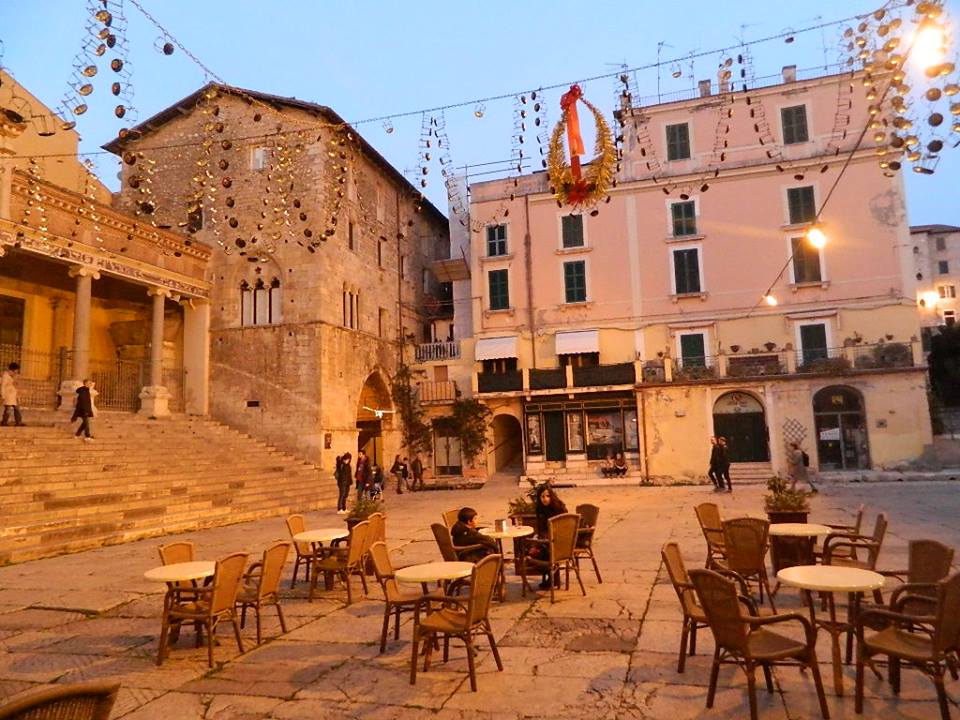 Terracina, southern Lazio, Italy: 4 km of sandy beach, 2700 years of history, average temperature of 25 degrees from May to September, rich gastronomy and vibrant sport life. This city is a monument to slow life, living open air and enjoying all aspects of the Italian (tangible and intangible) culture year round.

Public spaces in Terracina embrace the concept of openness, harmony with nature, giving to people a view on the sea; they become places of aggregation to enjoy open air sport, admiring the city’s history and culture or more simply enjoying some moments of relaxing dolce vita.

Highlight of the city’s open air life is the 4km-long seafront promenade. Both during the warm and the cold season, the promenade is filled with people enjoying a stroll at just 20 metres from the sea, jogging, meeting up for a coffee and a chat or to admire the bravest swimmers who dare going to the beach until late december. The seafront promenade stretches along the whole city.

At the end of the seafront promenade we find the city’s harbor, place of history and culture more than a stunning natural beauty. The harbor provided the city with richness and well being in the past, given the story of Terracina’s prosperity inextricably linked with the sea. A legend says that the Virgin Mary appeared to a fisherman while his ship was sinking; the fisherman suddenly could save his boat and have his life safe. The legend is celebrated every year in July, one of the highlights of the city’s folklore.

The way to the harbor culminates to the old lighthouse, still in function. The lighthouse, in addition to its function of warning ships coming into the harbor at night, became a public place of aggregation for the people that love to stay in the sun, surrounded by the sea all around. The place is, indeed, magical to experience at sunset; it became so popular that a local enterpreneur placed a small café here.

This picture shows the view from the old lighthouse directly on Monte Sant’Angelo, place of the oldest archaeological area in Terracina. One cannot resist the feeling of enjoying a coffee while the sun is going down, while admiring a two-thousand years old sanctuary on a hill.

For the next stop, we climb up the road to the so called acropolis, where the first city was born and developed. Specifically, we are in the city hall square, core of the historic town, a stunning layering of different eras that created a unique mix. The pavements are original from the ancient Roman times, while the houses in front of us are attributed to the 18th century. The cathedral on the left is dedicated to the local patron saint, San Cesareo; it was built during the 5th century on the remains of the old town’s Roman forum, then restored in the 11th century as it looks today. The tables and chair are a testimony of the (never missed) local culture to enjoy historical views in front of an espresso or ice cream.

As last stop of the photo tour, we head down once again to enjoy the modern city centre. Piazza Garibaldi is the result of a coherent, planned urbanization in the second half of the 20th century, which involved a development around one main street with several squares on the way. The neolassical Piazza Garibaldi was planned in 1794, a semi-circular square with the neoclassical Chiesa del Santissimo Salvatore is a triumphal tribute to the masters of the classical past.

Terracina is a fascinating stratification of eras, each offering a stunning testimonies perfectly framed in the surrounding natural landscape; each public space, nevertheless, has the common trait of being an open air museum, often with a stunning view on the sea; it stimulates the enjoyment of heritage, which represents the first step for its conservation and transmission to future generations.

All photos by author unless otherwise specified.

The Indissoluble Relation Between Man and Nature: Venezuelan Vernacular Architecture

How the Silk Road Influenced the Architecture Through the Cities.