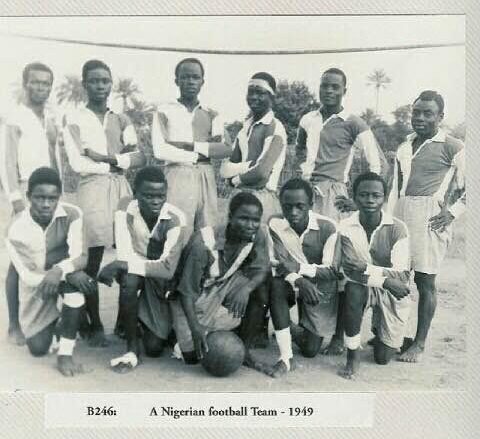 Sports in Nigeria has been in existence before the colonial era, communities in those era organized activities such as wrestling, hunting, Ayoáyo (a sowing game) amongst others. These activities were organized by community leaders as a means of entertainment and also to compete for titles, influence, kingdoms, women, land amongst other benefits. Although, often times they were Strategy used in conquest and to instill fear.

Modern sporting activities started in Nigeria at the arrival of missionaries and foreign educators into Nigeria, they used these sports as a means to foster inter-community relationship. They came up with concept such as community shields and cups between the primary schools in the various communities where they have enlightened their pupils the concepts and rules of modern sports such as high jump, athletics, soccer, etc. The first formally organised sports competition in Nigeria was in 1921 this competitions was organised on a junior and senior categories at the provincial level in athletics. The junior category competed for the Sir Clifford Shields while the seniors, mainly the battalion and regional clubs, vied for Colonel Marital Shield. Basically sports organization and competition outside of school centred around the garrisons and police except for very few regional clubs.

This competition lead to the establishment of the Amateur Athletics Association of Nigeria (A.A.A), with the aim of promoting Amateur sports throughout Nigeria. The A.A.A established the Nigeria Football Association (N.F.A) which was in charge of amateur soccer competitions. The first official game of the Nigeria Football Team (although as a British Colony) was played in October 1949, against various amateur teams like Dulwich Hamlet, Bishop Auckland and South Liverpool.

According to Pa Sam, the Nigerian side played barefooted against the English footballers all of who wore iron boots. He said the tour was a scintillating experience for them, because it changed the teams paradigm of what football really was. Also, he said that playing with international players was not comfortable at first for the team due to the in ability to acclimatize to the environment, but with time they got use to it. He commended the team spirit of their opponent as they were very friendly in as much they were playing with another race. Furthermore, he said that this tour was a major break through for the team in terms of building team spirit, and the impact of it were visible in their subsequent matches.

History has it that the after the tour of UK, the Nigerian team returned to Africa and played its first international match against Serra Leone in Freetown on October 8, 1949 and it was Henshaw that also captained the Nigeria squad to a 2-0 victory. Nigeria first participated in the Olympic games in the year 1952 were they sent some o their athletes to participate in every Olympics summer contest. From 1952 to this present day the country has been able to win just 23 medals. A breakdown of the medals show 3 gold, 8 silver and 12 bronze medals. Apart from the Dream Team that won gold in 1996 soccer championship the rest of the medals have either been won through athletics, boxing and weight lifting.

Finally, I believe in this forthcoming Olympic Games, I am certain that MY Country Nigeria will come back home with more medals.

When Nuvolari Won – A legend over the limit