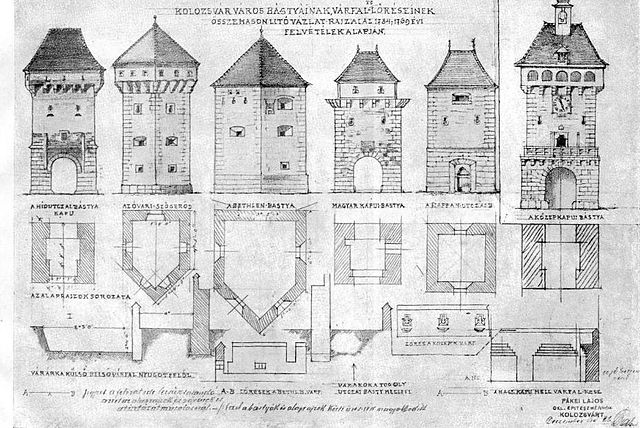 As a student in the heart of Transylvania I am quite glad that GoUnesco gave me the chance to discover the oldest built heritage in one of the most important cities in Romania, Transylvania. Thus I went on a walk in the old centre in Cluj Napoca and tried to figure out how the medieval fortifications were organised once upon a time…

According to the latest archaeological excavations, the former medieval centre of Cluj was first located on the territory of the Benedictine monastery from Cluj- Mănăștur (2 km West from today’s city centre) from which the County seat separated itself at the turn of the 11th century. From that moment the seat was installed in the Old Castle, placed in the Northwest corner of the Roman fortification of Napoca.

Thanks to the Tartar invasions, this fortification did not serve for so long and it was rebuilt by Duke Steven V. (1257-1269), when Cluj became a free village, inhabited with German hospices. The Old Castle had a quadrilateral fortification with inner tower and two gates. The rank of town was granted in 1316 by King Carl Robert. The rank of free royal town was provided by King Sigismund of Luxemburg in 1405, thus giving the right to surround themselves with new walls.

The fortification was finished in the last quarter of the 15th century. It underwent several sieges, the damaged sections being rebuilt and decorated with memorial slabs, with the coat-of-arms and name of the actual Prince, as well as the names of the town’s judges, who contributed with funds to the reconstructions. In the early 18th century the old walls cannot cope anymore with the new requirements of military architecture, so that the Austrian power built a new fortification (castle on the hill, citadel, on the left bank of Someș river). The old walls and towers were demolished during the 19th century. Only the Southeast tower of the Old Castle, the firemen’s, tailors’, masons’, joiners’, bootmakers’ towers and significant sections of the South Wall have survived.

This tower is the most popular one, and it is well used for touristic purposes. The wall of the newer fortification connects to this bastion from the North. The pentagonal building has also embrasures on the spandrels.

It was rebuilt in 1629, the fact being commemorated by a memorial tablet on the Eastern spandrel. This tablet also includes the coat of arms of the actual prince during the above mentioned reconstruction, Bethlen Gábor (the reason for the mistaken name “Bethlen Bastion”).

Caste Slos and the interesting stories that it keeps