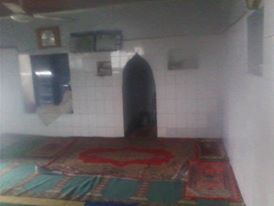 The Mosque of Ntibe ‘’Msihiri wa Ntibe’’ in Comorian was built in the fifteenth century. It is named so in reference to Sultan Ntibe Ntibe wa Kandzu, founder of the city of Ntsudjini and also the builder of the mosque.

As first mosque of the city, it also served as a Friday mosque. At the time, there were very few mosques in different regions of the country. People were therefore moving from their places to get to the nearest village for the weekly Friday prayers. So it was the case for the Mosque of Ntibe. Many people from the surrounding villages went there for the great prayer of Friday.

Located in Ntsudjini, the capital of the region of Itsandra in Njazidja the largest of Comoros Islands, the mosque played an important role as a center of religion learning. And history tells us that it was the place where the princess Mmadjamu wa Mdombozi began teaching Minhadj Twalibin which is among the great reference books to Islam.

Unfortunately, as is the case in various parts of the Comoros, the old building was destroyed during a so-called renovation in the 1980s. Next to the mosque is the cemetery where lies the tomb of Ntibe wa Kandzu who built it.