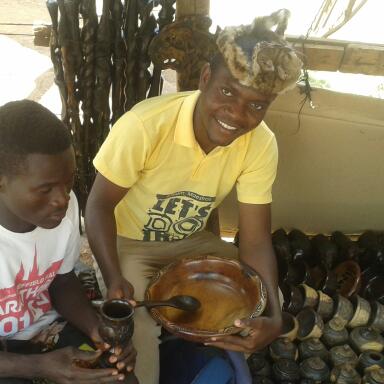 Though intangible, art has a great value to humanity. Art not only defines the culture of a people, but is in fact manifestation of the culture itself. One way of understanding the intangible is looking at the tangible craft.

The history of craft and craft-community goes back to their use in various traditional practices. People wanted to keep props, and costumes as personal items for house decoration and as clothes in order to be identified with a particular culture. Such demand raised business opportunities, craftsmen started to produce and sell tangible cultural items for all the tribe across the country.

There is no formal education system where craftsmen are trained craftsmanship, rather, their skills develop from indigenous knowledge that is passed on from one generation to the next. These children are now packaging the crafts and selling them to local and international travelers in the urban areas.

Craft has also helped to promote tourism in Malawi, the visitors associate culture with the craft products they buy from the artisans. In this light, Malawian craftsmen have really done a great job, they have designed art that carry the marks of the country so that they are distinguished from those that are found in the other parts of the continent such as Kenya and South Africa. This is done by using Malawian colours in some of the crafts, for example in wrist bungles made of the beads that bare the same colors as on the Malawian flag; Black, Red and Green, symbolizing black people, blood of the heroes of the war against imperial colonialism in the same order. Crafts such as Map of Malawi made from wood have words Malawi encrypted on them and one need to be day dreaming not to read them

Globalization has threatened intangible heritage such as the language and dance and craftsmanship is no exception, due to exposure to the imperial dominated world craftsmen have resorted to making craft that people love to buy, the buyers are probably inspired from media.

I remember ordering a model of a BMW25I from one of the craftsmen not because it is attached the culture of our great nation, but because it is the car that I will buy in the near future so I though having a model will be a great inspiration. That’s how globalization can affect people’s choice of craft. The same thing has happened in terms of children’s toys, instead of making indigenous canoes that are associated with the fishing culture of the residents of the lake shore of lake Malawi, craft exhibitions are dominated with models of motorcycles and mansions, courtesy of globalisation.

Therefore the plight of the craft depends on its storage in the museum so that the people can know where we are coming from and be able to maintain the same. Music artists have also used art studios and exhibitions to expose craft and it has helped a big deal.

An important meeting with the history of Vienna