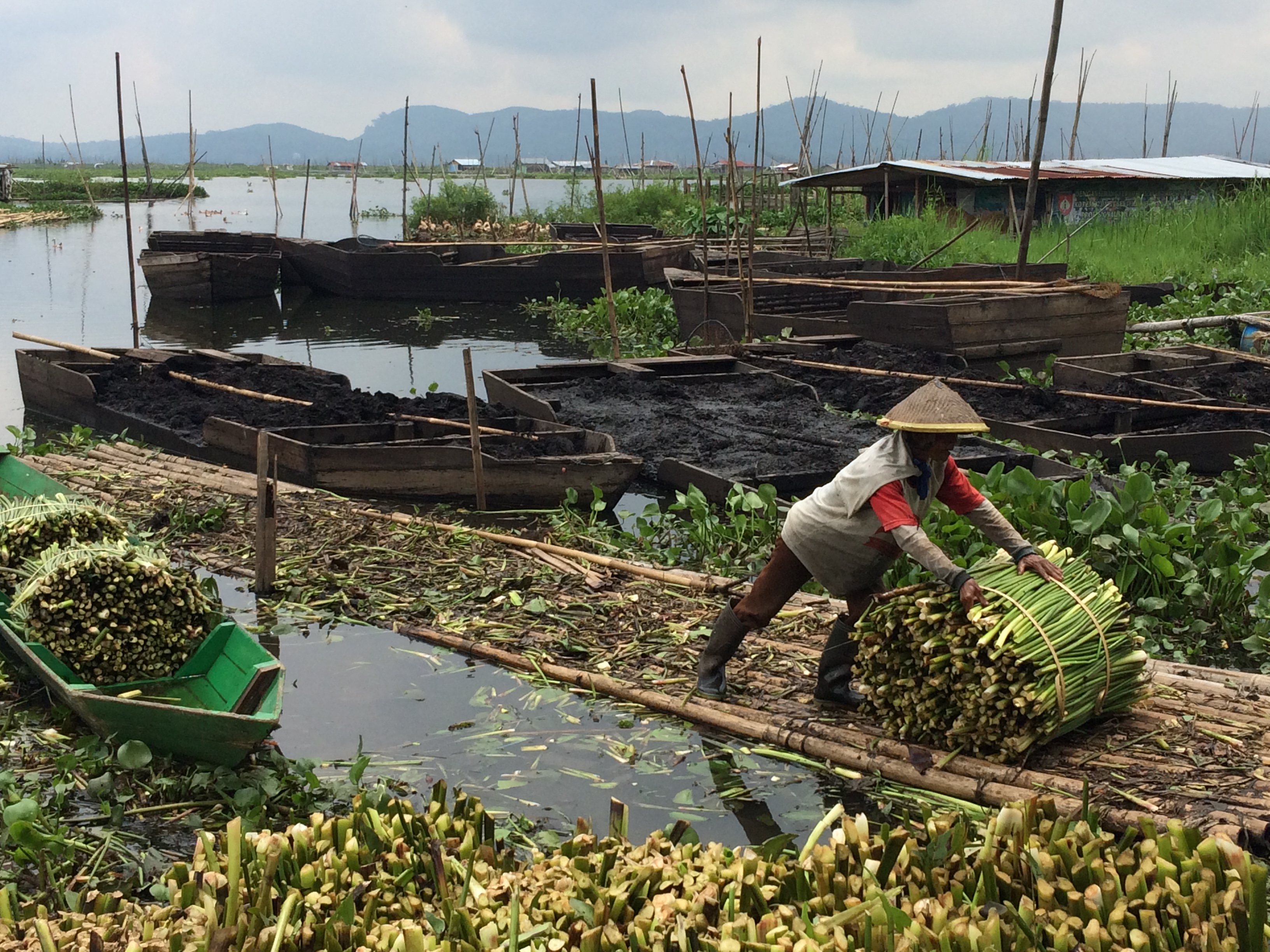 At noon, the fog still surrounds Rawa Pening at the Ambarawa Basin,  the origin of the best quality water hyacinth in central Java, Indonesia. The plants grow wild and strong because of the wind in the swamp which is as big as a medium-sized-lake. Hyacinth farmers sail with their wooden canoes to the middle of the swamp in the morning. They can harvest as much as 200kg of hyacinth on each trip!

Upon arriving at the dock, the hyacinths are weighed and hauled to a truck and brought to the buyers.

A man is spotted harvesting hyacinth in the middle of the swamp. A harvester hauling a bulk of wet hyacinth stems. Photo credit: Anastasia DwirahmiIn the village of Banyu Biru, Ambarawa, hyacinth is an important commodity. After being dried for a week, the stems are ready for further processing. The craftsmen turn them into various products such as baskets, floor-mats, tissue canisters, dust-bins, and even sandals. Slamet, a Dusun Demakan, has been in business since the last 15 years and is a leading figure in this industry. He claims to have trained many of his fellow crafters. A lot of his customers are hotels and resorts who order sandals for their guests.

There are seven groups in Banyu Biru; each group with five to seven crafters. Slamet himself leads a group of five. He explains that there are at least four steps before the hyacinth is ready to sell:

First, is the drying process that takes up to a week in the rainy season and slightly lesser in the dry season. However, the heat makes the colour of the stem paler in the dry season, which is preferred by many. In heavy monsoons, the wet stems are sometimes put into a special oven for drying.

The dried hyacinth is then pressed or weaved and then braided directly. The pressed hyacinth is used to make floor mats and tissue canisters. The baskets are made directly from the unpressed stems. After taking forms, the product is coated with bleacher and dried immediately. Usually, one or two people are in charge for each process.

In Slamet’s team, two women oversee this process — one is responsible for braiding the stems, while the other, for pressing them.

Chosmah of Dusun Sukobondo specializes in the weaving process and is the leader of the craft organizations in the Banyu Biru area. She explains that the tradition of making handicrafts from hyacinth started a long time ago in this  area, but admits that many of the craftsmen take this business as a part-time job and still rely on farming.

The potential of this kind of craft is supposed to be high, but it has not been recognized by the government in a proper way. Chosmah explains that there should be a regulation on the price and the harvest of hyacinths every day. She worries about the environmental consequences, especially because the farmers throw the roots and leaves directly into the swamp.

She hopes that the government would pay more attention to the crafters in her village and provide training to them on marketing, management and design improvements.  After all, it is only with the help of the government support that traditional crafts like these become lucrative and create a legacy of their own.