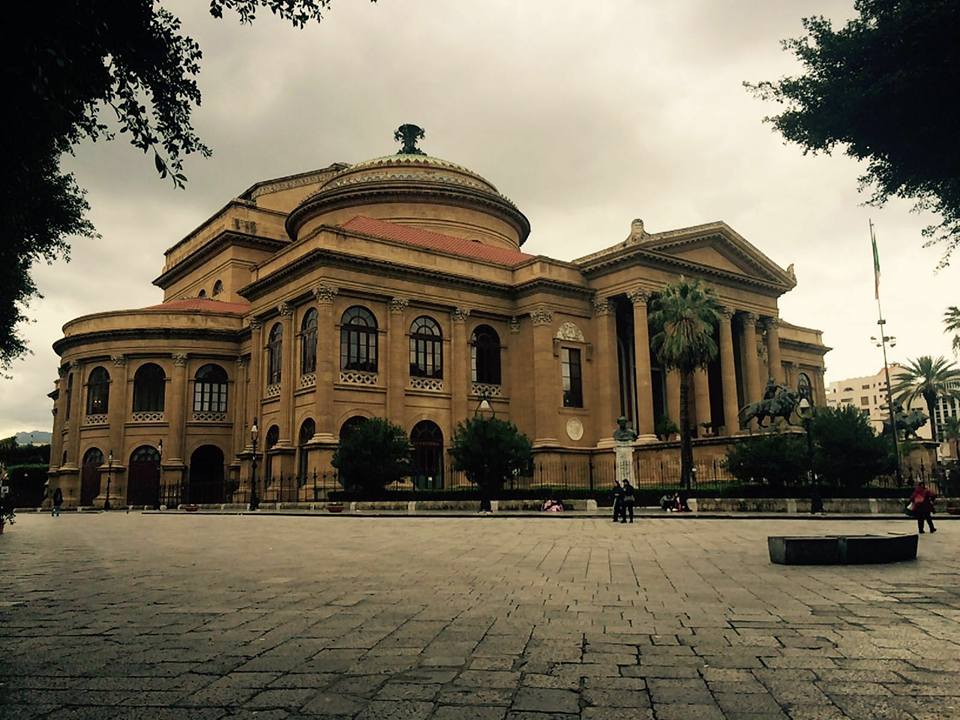 While living in Agrigento, often for university studies, I walk along the streets of cand admire the countless structures, historic villas, old churches and palaces.
The countless monuments, of considerable historical and artistic value, “tell” the different periods that have marked the history of the city.
Between all monuments, the Theatre Massimo stands out for its size and beauty.

So, I decided to spend some time in the theatre and report the experience at GoUnesco, helped by my friend Davide, a student of architecture very prepared.
Already On the way, from Agrigento to Palermo, he spoke to me a lot about the Theatre, history, architecture, events …
David was an encyclopedia, seemed not to stop more, so I decide to take notes…
The Theatre Massimo Vittorio Emanuele of Palermo, is the biggest theatre in Italy and it is the third in Europe.

The work was initiated by the architect Giovan Battista Filippo Basile in 1875 and completed by his son Ernesto Basile, elegant representative of the Italian Liberty, who built the theater in the neoclassical style.
I was very interested in the subject and I was eager to visit the theater with the company of David.
But unfortunately, or perhaps fortunately, there was a demonstration in front of the Theatrethe manifestation “Wake Up Italy”.

After participating in the manifestation, Davide recounts me a legend of the theater really interesting that i want to recount you because it isn’t very famous.
Where now there is the big Theatre, before there was a big monastery where no one lived, only a nun.
The nun was walking with his prayer book in hand, among the silent corridors: a nun jealous of that silence, the guardian of her temple where she spent, in contemplation and spirituality, her days.
When the nun knew that the the municipality of Palermo wanted to destroy her convent, to build a theater … … … she did not keep her spiritual calm.
She tried in every way to prevent the construction of the theater, but did not have success, so, she threw a curse, promising that would not have never gone to that place.
According to the legend, the nun still roams through the rooms of the theater. Some claim to have seen a shadow of a nun wandering backstage, in the basement and launches real curses. It also says that who does not believe in the legend stumblest on a particular step after to entering to the theater, said step precisely “step nun.”
Italy

St. Stephen must be proud