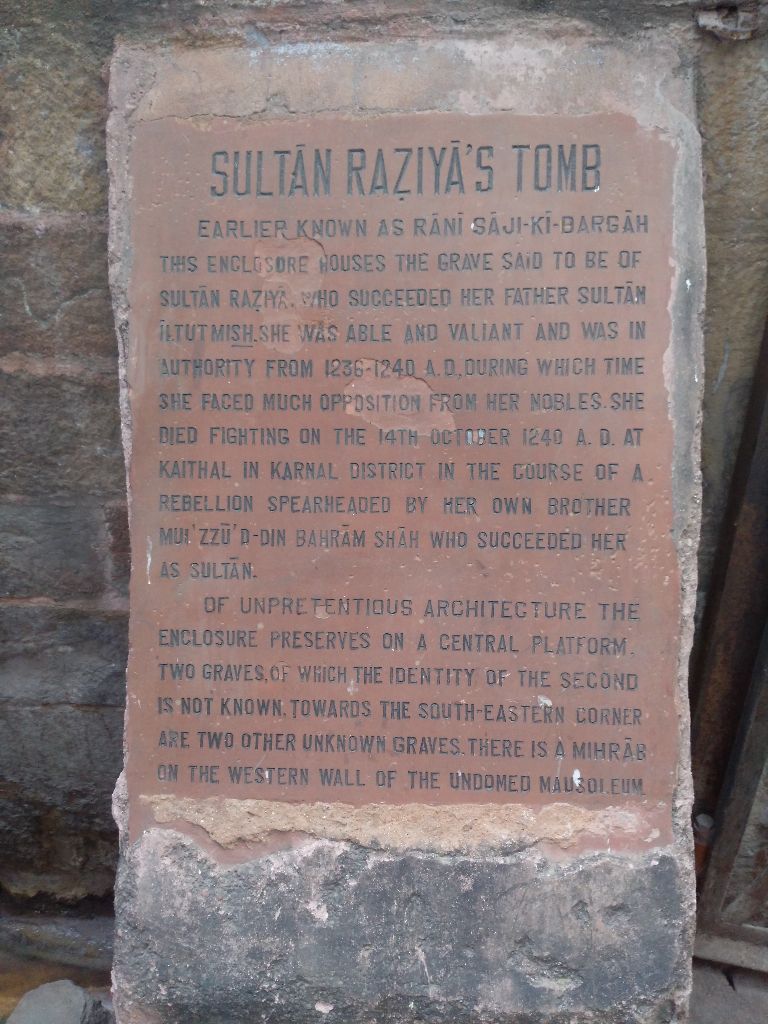 One can never save oneself from the experience the roads of old Delhi has to offer the individual. Walking through those crammed roads of the essence of Delhi, one gets filled with all kinds of emotions in one go as if that’s the place any tourist would not like to miss visiting. In search for some unexplored heritage of our motherland, my steps took me to one such amazing place situated in the lanes of Bulbul-i-khan locality. After taking many rights and lefts while walking through the passages, I finally managed to reach the “forgotten” tomb of the “indelible” sultan of Delhi, Razia Sultan.

Razia Sultan, the only woman ruler of Delhi, probably India, lies among one of the streets of old Delhi, surrounded by the construction of unauthorized buildings and no roof over its head. Ironically, that is the tribute we all have offered for the sacrifices and the greatness of the first women ruler in the complete history of Delhi. Razia Sultan, originally named as Jalalat-ud-din Razia, being the daughter of Iltutmish, was one of the rulers of Slave dynasty. Struggling through the freedom and the status, the woman was provided with in that era; Razia Sultan can be seen as a shining stone overcoming the shortcomings of being a woman. Showing her disinterest towards the casual customs and the way of life attached to the female counterpart, Razia Sultan could always be seen as keeping her foot forward and learning the state of affairs and assisting her father during his reigns. One may see no difficulty now, as to why she preferred using the title of ‘Sultan’ rather than ‘Sultana’!

Razia Sultan’s story can very well be imagined and understood with regards to the present day scenario, difference being that 21st century status is just a little more sophisticated and well manipulated. Razia Sultan was supposed to ascend the Throne of Delhi Sultanate upon the demise of her father, yet this decision was greatly resented by the existent nobility, not because Razia was an inefficient ruler but she was a female. Being ruled by a princess was against and disrespectful of their inner sentiments. As a result, Ruk-ud-din Feroze Shah, brother of Razia was welcomed with a great show of hands.

But being a ruler of Delhi was not Ruk-us-din Feroze Shah’s cup of tea. It was just a span of six months which could provide luxury and fame to this ruler. Soon, Ruk-us-din Feroze Shah and his mother, Shah Turkaan was assassinated due to his love for personal pleasures and his ignorance for the people of his court and Delhi. Fortunately, this handed the throne of Delhi Sultanante into the hands of Razia Sultan.

As expected, Razia proved to be among the most notable and powerful rulers of the Delhi Sultanate. Be it her nobles or the courtiers, she kept a close watch on each and everything existent in order to rule in as a perfect manner as possible. How Razia died has been a matter of mystery since time immemorial. One story suggest the end of her life by the hands of her childhood friend, Malik Altunia while another suggests her demise at the hands of her brother, Muiz-us-din-Bahram Shah who later became the new ruler of Delhi Sultanate. These are just 2 among the many stories unfolding the mystery behind her death.

Such is the fate of the only women ruler of India, that where the actual soul of Razia Sultan lies is still unknown. According to the sources, her original grave may be existent in any or all of these three places; Delhi, Haryana or Rajasthan. After a little conversation with the locals residing in one of the house next to the grave of Razia Sultan in Delhi, one could just learn that Razia Sultan lies along with her sister Sajia, with small graves being of her children

. Another passer by suggests that the smaller grave is also thought to be of her servant. What the reality stands, may always be a mystery. What remains in our hand is just to bring forth the essence of the teachings of the life of Razia Sultan and keep the courageous nature of Razia Sultan alive. The Namaz being offered near her grave can be considered as an important aspect for the place getting visitors on regular basis, apart from which; the essence of such an important part of our history fell between the cracks.