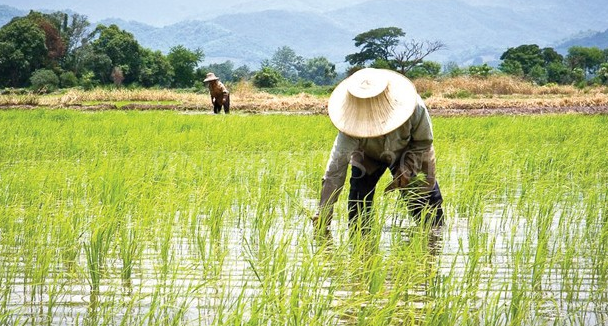 Rice is not a local dish in Malawi and thus, it is one of the less consumed dishes. It is assumed that the crop was introduced in Malawi by early traders and missionaries. This crop is not grown country wide due geographical constraints and its growth requirements. It is therefore seriously grown along the lakeshore areas of Malawi since the crop require dambo(wetlands) land. Districts like Karonga, Salima, and Zomba are the major growers of rice in Malawi. These districts are also historically marked as hotspots for early traders and missionaries.
In Malawi there is a traditional value attached to rice. In all big occasions rice is served and substitutes Nsima (hard porridge made from maize or cassava flour) in the cuisine catalogue. Rice is served to welcome important guests or close relatives who have been away for a long time. Preparation of this dish (more especially served with chicken) for visitors is deemed as hospitality of the highest order. The dish characterizes moments of happiness, joy, celebrations and positivity.
In addition, it is nationally conceived that rice as a dish is for the elite people of the society. As such, this dish is a symbol of high social class. This is so because cultivation of rice in Malawi is done at a small scale and this makes the dish expensive. In most cases, it is the well to do people that enjoy rice on daily basis because they can afford to buy.
In Malawi, Maize is the staple food followed by Cassava. However, rice is important as it serves as an alternative food especially for people living in dambo areas where maize and cassava cannot do well.

There are a number of traditions associated with rice in Malawi. Most Malawians especially those who live in typical rural setting, have traditionally overlooked rice as a full dish. This has been so because these people are used to eating Nsima and therefore finds rice so light a dish to be considered a full meal. Due to this traditional understanding, rice has often times than not been taken along with tea as breakfast and in other cases it is prepared as porridge.
It is also traditionally believed that soaked rice and rice porridge enhances the sexual stamina of the man through enhancement of sperm production. As such, married women periodically serve their spouses with either soaked rice or porridge in a way of bargaining for satisfaction in bed. It is also believed that this practice of serving soaked rice and rice porridge enhances sexual bonding between married people.
Notwithstanding, cultivation of rice in Malawi is associated with some very interesting traditions. It is believed that one cannot just get a piece of land in a particular rice growing area and start cultivating rice. Doing so is conceivably a waste of time and resources because it is believed that success in rice farming is a function of how protected your farm is from people who harvest rice magically. It is alleged that some farmers use rituals/magic to harvest other peoples’ rice while still in the garden. If not protected, an acre of land can to extreme cases produce only 2 bags of rice despite the crop doing very well in the field. This has led to use of charms around the field to protect the crop from these theft schemes.

Boudin: A Flavorful Link to the Cajun Past!

The Frankfurter – From Emperor to Chancellor