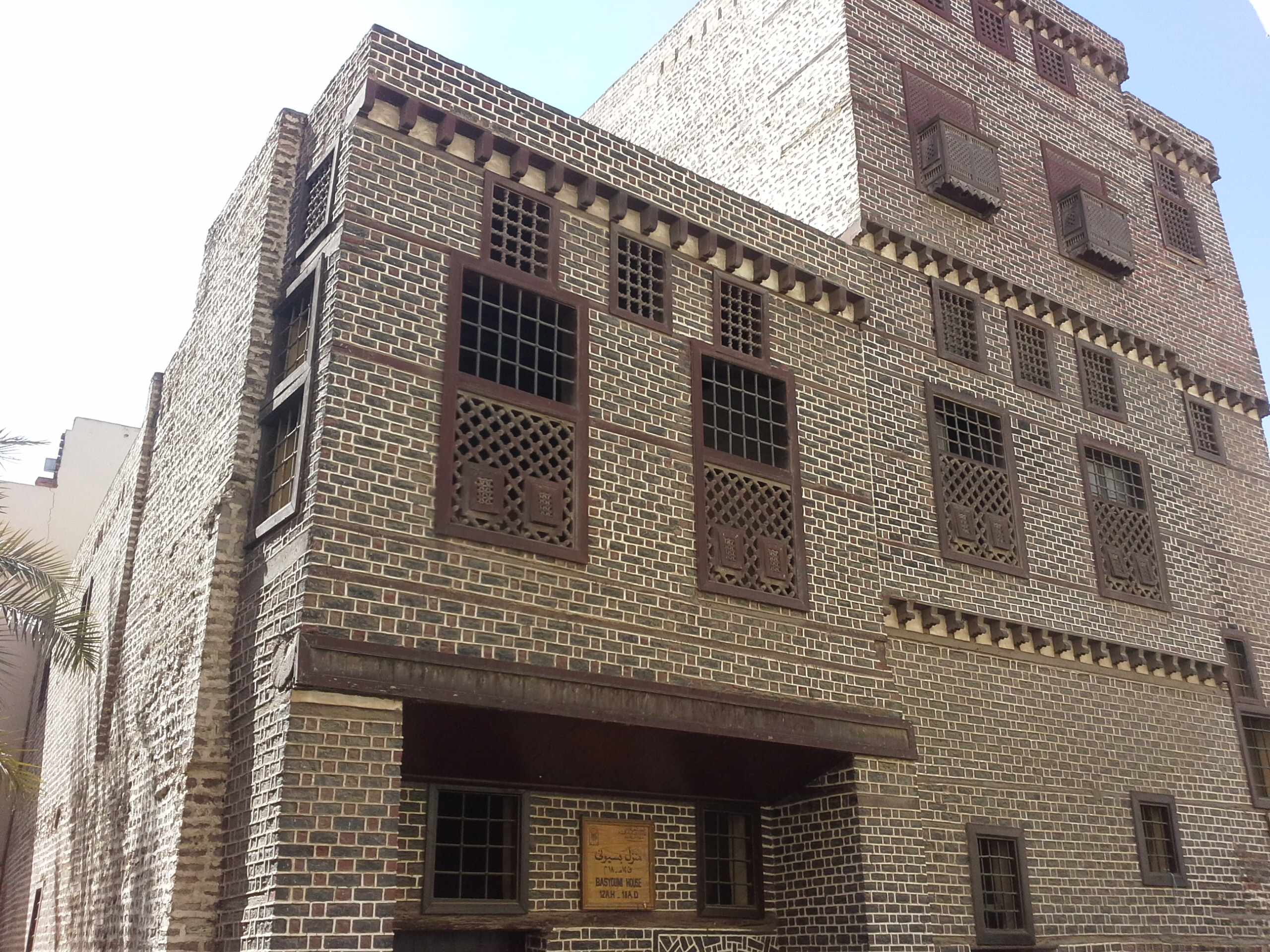 Construction of  houses, settlements, or dwellings, in any architectural expression, is aimed at creating security and a comfortable environment.  This perspective appears clearly within Islamic traditional architectural heritage in Egypt especially during Mamluk and Ottoman periods.  During Islamic era, there are architects who built settlements considering the regulations of Islamic religion while the others built dwellings serving the community interactions specifically their socio-cultural needs.  The former aspect is appeared through Rosetta/ Rashid urban-cultural landscape.

Rosetta is an Egyptian city. It is located in northern coast beside Alexandria. This city is called“Rashid” by Egyptians . It has a great historical significance. It was flourished at the end of Mamluk period as a military town specifically with Qaitbay Fortress where Rosetta stone was discovered as well as a commercial town. The military, commercial and political role of Rashid was continued along Ottoman period and modern history.

In March 2016, I have visited this town, as a scientific field trip, following up with my master[1] colleagues the conservation status of this heritage city or, we can call, open air museum. According to a direct observation, Rashid owns numerous multi-floor settlements which date back to eighteenth century. The majority of these houses are compounded in Dehliz el-Mulk Street. Moreover, its householders are traders; consequently architect designed the settlement serving their needs and wants.

The architectural design of these dwellings is characterized by its façade decoration of Mangor bricks. Originally, Mangor brick is considered a potter stone that to enter an oven under high temperature adding oxides. In creative way, these oxides give it two colors, red and black. Furthermore, the nature of Mangor brick can remain resistant against numerous and common environmental impacts in Rashid city such as rain, humidity, fog….etc.

Some Attractions of Rashid, a Heritage City:

Rosetta, as a heritage city or an open air museum, is very remarkable since it embraces unique attributes of both tangible and intangible heritage values.  An architectural planning coupled with fascinating the flourished arts, with the tale of Rashid settlements, are associated with a common historical figures, for instance, the previous owners of these house and their successors.

These constructions had two functions as a place of residence, and in the same time, as headquarter of administrating the commercial affairs. Rashid has a range of space suitable for numerous activities which could enhance the visitor experience without causing any risks to the heritage constructions itself. Moreover, the heritage buildings in Rashid contain a distinguished architecture that continues the concept of Arabian house designs. This design keeps on privacy and gives a suitable freedom for who are living in these houses.

These settlements were mainly used in a commercial context. It has a great historical significance.  It embodies a long timeline, starting with its foundation during Ottoman period and continuing to the modern period.  The site is considered a theatre for governmental and commercial procedures in Rashid.

From my overview, Rashid might be easily inscribed in UNESCO World Heritage List that it has the following criteria:

(i) to represent a masterpiece of human creative genius;

(ii) to exhibit an important interchange of human values, over a span of time or within a cultural area of the world, on developments in architecture or technology, monumental arts, town-planning or landscape design;

(iii) to bear a unique or at least exceptional testimony to a cultural tradition or to a civilization which is living or which has disappeared;

(iv) to be an outstanding example of a type of building, architectural or technological ensemble or landscape which illustrates (a) significant stage(s) in human history;

(v) to be an outstanding example of a traditional human settlement, land-use, or sea-use which is representative of a culture (or cultures), or human interaction with the environment especially when it has become vulnerable under the impact of irreversible change;

(vi) to be directly or tangibly associated with events or living traditions, with ideas, or with beliefs, with artistic and literary works of outstanding universal significance. (UNESCO)

Direct observation process, which occurred during a trip to the case study location, is very important making an environmental scan in order to get an understanding of the strengths, weaknesses, opportunities, and threat factors; in addition to identify the site components and the significance of cultural identity.  Consequently, the author uses this tool creating the SWOT analysis.

1- Picnic area. Rashid is a suitable place for visitors to enjoy leisure-time with their families and friends enhancing their edutainment experience.

2- High authentic value. It, as a heritage city or an open air museum, is authentic and unique.  It displays magnificent heritage features, such as furniture, warship tools and cloths and memorial gifts, which date back to Ottoman period.

4- Architectural value. Rashid settlements are distinguished by architectural design. Its façade is decorated by Mangor

2- Lack of services and facilities. Rashid monumental buildings don’t offer a variety of facilities or services on-site such as welcome office or a tourist cafeteria which serves perfectly the culture tourism.

3- Lack of interpretation. Although each heritage building has its label and panels which give visitors brief description about, Rashid, as an open air museum, has insufficient interpretation tools such as signage, banners, giving concise historical and archaeological knowledge and guidance arrows with which people can determine their visitation on-site.

4- Lack of tourism data. Rashid tourism attractions record the visitor numbers only via tickets sold while it doesn’t have enough data or statistics regarding to the visitor profile. This lack is considered a great obstacle to do a marketing research and the site management process.

7- Lack of heritage promotion. Rashid, as a heritage product overall, isn’t well promoted either on the domestic or global level and doesn’t utilize new promotion techniques.

1- Adequate road network and accessibility. Rashid monumental buildings has a prominent location that to be situated in the core of Rashid or Rosetta city and so near to tourism facilities and amenities like restaurants, cafes, hotels, and hostels.

2- Self-financed entity. These heritage buildings have the capability to reach the level of non-profit organization (NGO). Also, it has a great image attracting an international fund.

3- Possibility of partnership with provincial and federal agencies. The characteristics of Rashid as a heritage city support it creating a partnership with provincial and international agencies in relation to museological collection management, architectural conservation, collection restoration, heritage site management and heritage-impact assessment. Furthermore, it isn’t considered internationally the only heritage city specifically along the Mediterranean coast.  This step could create vertical integration with further international heritage building-museums around the world that Rashid heritage buildings could share a cultural agenda.

1- The continuing of the reduction of international visitation rate. Egyptian heritage sites are financially dependent on the revenues from ticket sales. Therefore, as a result of the declining tourism rate in Egypt, the Ministry of Antiquities has an insufficient budget to complete the conservation and site management processes.

2- Environmental Impacts. The heritage buildings were originally constructed on agricultural lands; consequently it is affected by the influence of the subsoil water, drainage water, humidity, and climate change as well as rainfall during winter season.

3- Illegal Urban Development and Visual Pollution. During the last two decades, the amount of illegal urban development and encroachment has increased as a result of a lack of local community awareness and the weak application of laws. Due to the unorganised, visually unappealing buildings and satellite dishes, this threat might, over the years, generate visual pollution.

4- Poor Conservation and Restoration. All floors of these heritage buildings as well as the damaged stairway were replaced, interior walls were re-plastered and also, all wooden ceilings were repainted. Subsequently, this threat might, over the years, loss the characteristic of authenticity and heritage identity.

Rashid is a world heritage city. It is the most well-preserved site for Islamic architecture Ottoman houses. Due to its cultural heritage significance, it is classified as the most significant cultural heritage open air museum of its type. It is well-known for the local community and promoted internationally. It is a place generating revenues via gathering creative multi-purpose uses. It is an important case study for scholars.

Rashid, as a heritage city or an open air museum, offers historic, economic and scientific values gaining its historical significance through its architecture design as well as its collections of medieval artefacts. It displays its collection in-situ and through the use of multimedia tools. It offers its services to local and international visitors. It has a strong leadership committee which guides site crew towards a controlled administration that raising the awareness of the local community for the site significance as able to participate – in a voluntarily way – in either formal or informal activities. It preserves itself through using numerous methodologies of heritage conservation, management, and marketing.