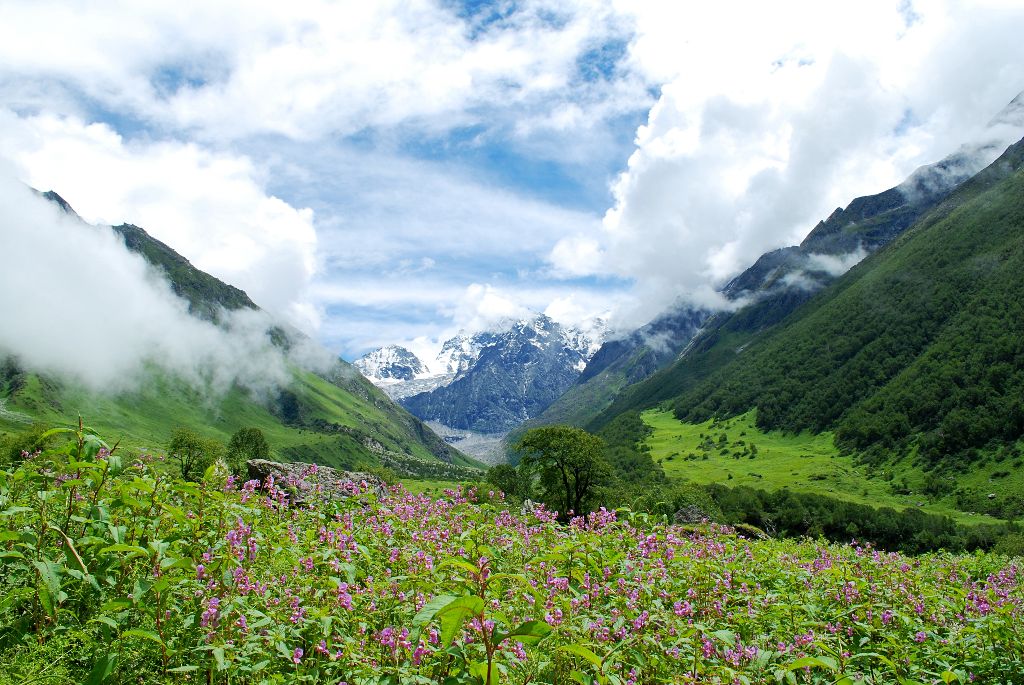 It was summer in Kolkata. Heat and humidity had left the city fatigued. I peered down from my balcony out into the streets below. The regular commuters had abandoned the streets and once in a while a rickshaw pulled itself through the deserted alley. It’s that time of the year again when an escapade seems to me an utmost necessity. The cool and mystic Himalayas beckoned me and the traveler in me was itching to leave.

It was hardly past noon when my friend dropped by from his office. He strained his hands through his tight jeans pockets and pulled out a sheet of paper and handed over to me. As I unfolded it, I realized it was a magazine editorial hastily torn out, leaving the paper jagged at the edges. It was about a trekking destination, the Valley of Flowers. I had always known about this place but it was something new my friend had come across. We called up our friends and without much ado were on our way.

After two days of a train ride across the Indian mainland, we pulled into Haridwar. The air of the foothills was cool and scores of pilgrims had thronged the holy city and the Ganges banks. We hopped into a bus and left for Joshimath. After hours of a bumpy ride, we finally arrived. It was a small city and mostly a transit for pilgrims going to higher reaches of the Himalayas. In contrast to my hometown, it was cold here and in the little space the Himalayan town can offer, hordes of pilgrims, trekkers, tourists tried to make their place. Early next morning, we left for Govind Ghat, twenty minutes ride into the doorway to the valley of flower and the Nanda Devi biosphere. It is here the five of us packed our backpacks, checked our sleeping bags, folded our tents and officially embarked on the trek. Lines of mule and shepherds led their way up through the mountain trails into higher slopes. We humbly followed them. Past the town, along we came to the banks of the Alaknanda River. The sparkling blue stream ebbed and flowed through rapids and boulders making a gurgling sound that echoed through the valley. Soon we came across a foot-bridge, crossed over and trod along. On both sides of the valley moderate sloped mountain ridges rose and fell. The forested green mountains zigzagged up the valley and made way to higher rocky mountains in the distant. The river had carved its way beautifully through the valley restlessly flowing through a bed of gravels and boulders. Pine and fir forests line the mountain slopes. The trail is clean and stony at parts but well laid and broad through years of use and attention. Along the road you would come across an occasional dhaba distributing foods, drinks or anything to nibble. The trail follows by the river and slowly ascends upwards. After halfway, we came across a crossing and then moved ahead. Shortly afterwards, the trail moved eastward leaving river. We stopped briefly at the ledge overlooking the solitary river as it turned and curved up the valley until it vanished. After almost seven hours, covering roughly fourteen kilometers, we arrived at the edge of Ghangria.

Ghangria at an altitude of 3000 metres is a small village nestled in these mountains. Centred around a gurudwara and a helipad at the corner of the village, it is quaint and calm. Numerous hotels and restaurants have grown up with time catering to the needs of trekkers and pilgrims alike. We set up our tent by the western end of the town nearby a fellow group of trekkers. A strong gale was blowing in from one end of the valley below and almost blew off our tents. After several attempts we pitched it in. As the sun slid down, I sat gazing at the panorama. The intermittent patches of clouds were painted red and below them stretched the green valley of pine, fir and deodar forests. We met a group of trekkers from Poland at night taking in the heat from a bonfire they had lit up. We were soon joined by another group of trekkers who were returning from the valley. We cut jokes, exchanged information and later went to the local gurudwara for dinner. As we strolled back to our tents, we took a look at the vistas that presented itself in front of us. The village lit up with scattered lights velveted by the dark, eerie and quiet mountains on all sides. It had grown too cold and as we made our way back to our camps, the wind was biting down on our bones. We slipped into our sleeping bags and dozed off.

The next morning, we had a quick breakfast, packed our belongings and set out. We left Ghangria and were soon joined by a huge flock of porter-mules making their way up the valley. Soon, we would also come across numerous shepherds with their flock of sheep and goats wandering in a Brownian motion. The trail was less steep at this region, although, the trail had become too narrow now. As we moved forward, we could see an enormous valley and meadows take shape. And occasionally there would be little shrubs with flowers growing on them. The tree cover was much lesser now, yet there was a dense green undergrowth. Sporadically there would be a lonely tree standing amidst them. The mountains started to grow rockier and numerous boulders lined by bushes formed a major part of the foot road. After walking a while, we met a stream flowing below; more of a narrow channel of water yet gushing down with a playful enthusiasm. The clouds that had accumulated overnight cleared away within an hour and we were welcomed by a sunny weather and clear blue skies. A light breeze, moderate cold, warmth of the sun and away from din and pollution of cities it was a lonely world of its own. Ghangria to the valley of flowers is a ten kilometer trek, yet halfway, we found an ever increasing proportion of flower plants as we moved ahead. The cliff to our side had given way to a distant range of snow covered peaks basking in the mid day sun. The contrasting colours of green valleys and snow covered milky white ranges in the background were a treat for the eye. The sheer volume of beauty entices the imagination and intellect alike. A few distances apart, the valley slowly opens up to the right into The Valley of Flowers. As far as the eyes can go, the mountains were painted in all colours that nature could have offered. Flowers of numerous kinds including many endemic to the region are found. They spring up here and there, one next to the other all along the valley. Numerous butterflies keep flying around mid-day hovering up and down the valley. Clouds move into the valley from one end, play along the slopes of the mountains and gleefully leave from the other side. The panorama looks like an outburst of colours. Though there is very little fauna in the valley, this is a unique ecosystem of its kind. At an altitude of 3500 metres above sea level, it is perhaps the planet’s highest and biggest flower garden. The whole valley is filled with an aroma and there are stories of travelers fainting from the intoxicating smells of the flowers. This Reserve became a part of the UNESCO World Network of Biosphere Reserves in 2004. Since then numerous scientific communities from India and the world have been working towards preserving this exclusive environment. It demands not only our care but also respect. It is really here that anybody would learn to recognize the potential of nature and its glory. We stood silently listening to the howling wind and the faint sound the shrubs made rubbing onto each other encompassed with what felt like a continental of perfumes. The trail led winding into the valley and deeper into the Himalayas.

WHSs in eastern India and all you want to know