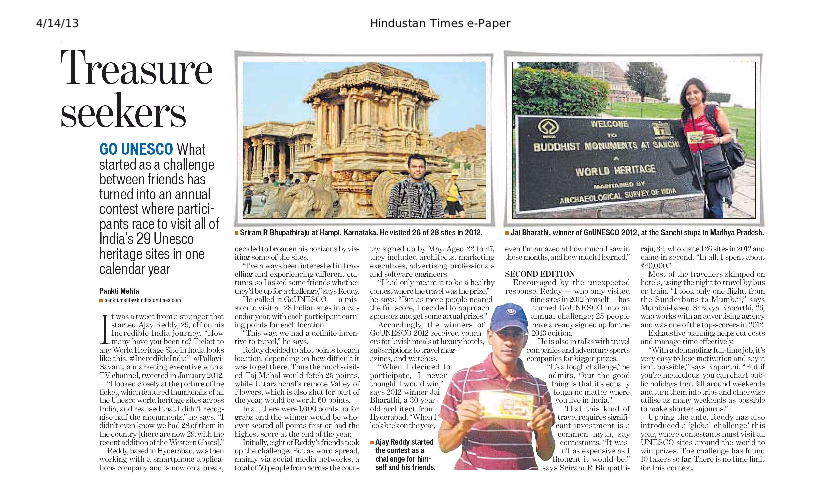 An edited version of this article appeared in the Hindustan Times earlier.

Sparked by an off-hand tweet, 50 professionals took up a challenge to visit all the Indian UNESCO heritage sites in one calendar year. With unprecedented response, this has now become an annual contest.

“How many have you been to? Ticket to any World Heritage Site in India looks like this. #IncredibleIndia”

Hyderabad-based Ajay Reddy, 29, spotted this tweet from @PallaviSavant on his timeline, followed by a picture of the ticket with a collage of India’s UNESCO heritage sites. “I looked closely at the picture, and realised I didn’t recognise half the monuments there,” he says.

Reddy started to read about the sites, and was surprised to find that there were 28 of them all over India (the Western Ghats weren’t added to the list at the time), including many he hadn’t heard of.

After speaking with friends, Reddy, who works a managerial position at a mobile applications company, designed a unique travel challenge he christened GoUNESCO—one calendar year, 28 UNESCO sites, 1,000 points up for grabs; to win, you must have visited all the sites and earned all 1,000 points, or have the maximum number of points at the end of the year.

Each site has different points allocated to it, depending on how difficult it is to get there. For instance, mainstream Taj Mahal will fetch you 25 points, while if you make it to the Valley of Flowers in Uttaranchal, which is shut for a few months of the year and difficult to get to, you can earn 60 points.

Eight of Reddy’s friends joined the challenge initially, and as word spread via social media and otherwise, a total of 50 travellers participated in the GoUNESCO contest, from Mohali to Bangalore, Mumbai to Jorhat. Aged between 22 and 47, this group includes architects, marketers, advertising professionals, software engineers and others.

“When I decided to participate in the challenge, I never thought I would win with all 1,000 points!” says Jai Bharathi, a 30-year-old architect from Hyderabad who read about the initiative in April 2012 and made it to all 28 sites by December 31, 2012. “When I look back on the year, even I’m amazed at how much I’ve seen in those months, and all that I’ve learned. It’s an overwhelming feeling.”

At each site, the traveller must take a picture of himself against the monument with the day’s newspaper, to prove that they visited all of them within the year. These pictures go up on a photo-blog, which serves a dual purpose – to keep track of the points and to help spread awareness about the heritage sites.

“I made it a point to write detailed posts about each visit,” says Bharathi. “Now, a local newspaper publishes these posts in a weekly column to educate people about the country’s heritage.”

Because of the unprecedented response, Reddy has now made GoUNESCO an annual challenge, and 25 people have already signed up for the 2013 version. He has also added a ‘global challenge’, where you have to visit UNESCO sites all over the world, but with no time limit.

“This is a tough challenge,” says Reddy, “but it’s equally tough no matter where you live in India. If you live in the south, you can take weekend trips to Hampi or Mahablipuram, while if you’re around Mumbai, your weekends can be used to see the Ajanta-Ellora caves or sites around Madhya Pradesh. There are sites all over the country, including the north-east region, so no one has a great advantage if they happen to be based in a particular city.”

“You need to take time to plan intelligently at the beginning,” says Mumbai-based Shravya Kaparthi, 26, who works with an advertising agency and was one of the top-scorers in 2012. “With a demanding full-time job, it’s very easy to lose motivation and say it isn’t possible. But if you are meticulous, you can chart out public holidays that fall around weekends and club them into longer trips, and otherwise utilise as many weekends as possible to make shorter ones.”

That this kind of travel requires significant investment is a common myth, say contestants. 34-year-old Sriram V, who came in second place after visiting 26 sites, says, “It wasn’t as expensive as I thought it would be. The total I spend on the whole project was about Rs 40,000.”

Most of the travellers skimped on hotels, using nighttime to cover distance by bus or train instead, and didn’t take flights unless they had no other option. “I took only one flight, from the Sunderbans to Mumbai,” says Kaparthi.

“We would just ask hotels to let us freshen up in the mornings and use their showers, and pay them a nominal amount,” says Bharathi. “However, I saved up to be able to complete the challenge – I don’t think I bought a single outfit in the whole year!”

The journey is the destination

The challenge has taught the group about the intricacies of the country, much more than they expected to gain.

“It’s the little things that give you insight into the people, their culture,” says Kaparthi. “We were at a train station in a tiny town up north, and a typical villager woman was around, looking meek, as we are accustomed to seeing them. Then her phone rang and her ringtone was Akon’s raunchy number ‘Smack That’! I laughed and thought about how India really is changing.”

For Sriram, the journey was as inward as it was external. “In addition to the country’s very rich heritage, I discovered a whole lot about myself,” he says. “I didn’t think I had this much resilience, or even spontaneity, to be able to pull this off. Or the ability to be so incredibly tired that it would take me two or three days to recuperate once I got back home, but to still keep going on to accomplish what I set out to do.”

Bharathi and Kaparthi, who travelled together for a few trips, also set out to dispel the notion that the country was unsafe for women. “Our parents and friends all tried to dissuade us from travelling alone, especially to small towns in Bihar and UP, without any male presence,” says Bharathi. “But we were stubborn, and I’m glad. We’ve met the nicest people. As soon as they know we are two women travelling alone, everyone goes out of their way to find ways to help make our journey easier, giving us advice on routes, transport, even helping us reach places. There’s a nice protective side to India we discovered.”

“I’m an architect and been actively reading about conservation, but even I didn’t know about many heritage sites. The country has so much to offer. It’s been a fascinating, overwhelming experience.”

“What struck me was the stunning diversity in India’s beauty, more than anything else. Not only is it all architecturally gorgeous, but there are natural wonders like the Nilgiris, or the wildlife in national parks like Kaziranga, or even just exquisite temples and mosques. There’s such little awareness. It would help to have an Incredible India-style campaign not for foreigners, but for Indians too.”

“I took part last year, but wasn’t able to get very far. I’ve enrolled again this year, and I’m looking forward to this travel being a break from my mundane, desk job-led life, and a way to de-stress and really explore.”