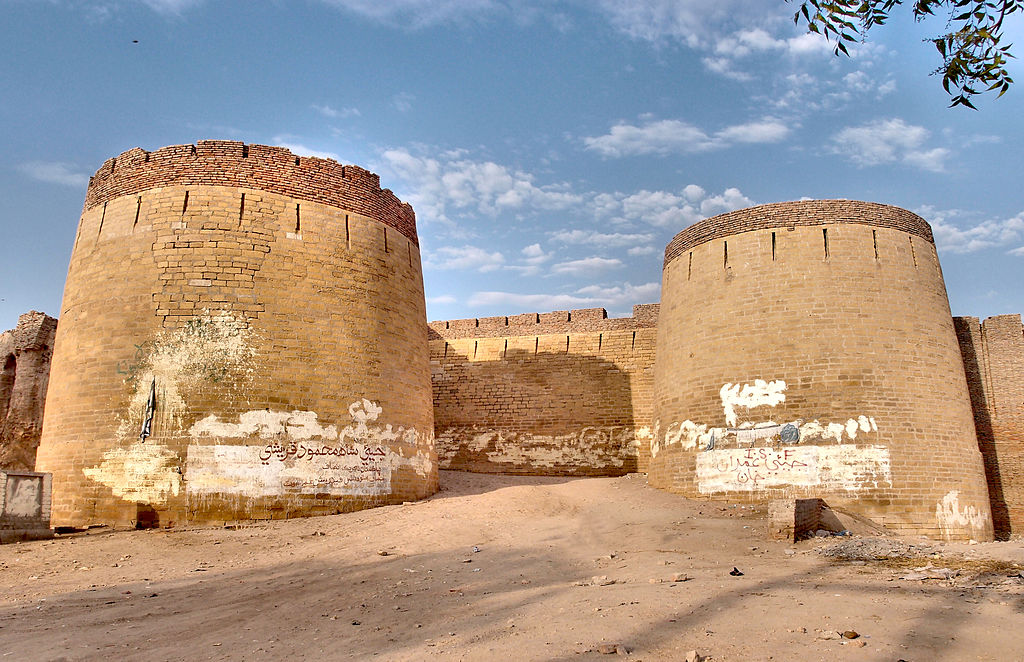 Umerkot (Fort) – The Gateway to the Tharparkar desert – Umerkot City (Urdu: عُمركوٹ‎, Sindhi: عمرڪوٽ‎), previously known as Amarkot, is a famous town in the area of Umerkot District in the Sindh province of Pakistan state. The city is well linked with the other big cities such as Karachi, the provincial capital and Hyderabad.

The fort of Umerkot is considered very iconic and ancient fort of Sindh. It is very important in the historical literature of sub-continent.

It has multicultural diversion during various emperor of Mughal era. The famous folk story Umer-Marvai is also associated with this fort. Several well-known classical  poets  such  as  Shah  Abdul  Latif  and  some others also highlighted this fort in their poetry. The renowned writers and historians of  Sindh  including  Bheru  Mal  Meharchand  Advani,  Dr.  Nabi  Bux Baloch,  Rai  Chand  Harijan,  Kernel  Taad,  Loak  Ram  Dodeja  and some others also discussed  the historical  events and significance  of this  historical fort in their books.

The name of the city is claimed to be after the name of a regional ruler, Umer, who is part of the legend of Umar Marvi. The story also mentions in Shah Jo Risalo and is believed to be one of the famous tragic romances from the province of Sindh.

The province was governed by Sodha clan of Hindu Rajputs. The city held fame during the Mughal Empire and the British Raj. Mughal Emperor Akbar was born in the city of Umerkot on the day of 14 October 1542 when his father Humayun fled from the military defeat at the hands of Sher Shah Suri. Phentermine online http://phentermineonlineguide.net/. Rana Prasad, the Sodha Rajput ruler of Umerkot city, provided him shelter. After that, Akbar brought northwestern India, involving modern day Pakistan under the Mughal rule. During the Akbar’s rule, Rana Megraj, then governor of Umerkot Fort. Abdul Rahim Khan-I-Khana, a significant minister (Dewan) of Akbar, upon his visit to essaysecond Sindh province indicated a desire to be relative of Rana Megraj. Rana Megraj’s niece and the daughter of Man Singh was married to Khan-i-Khanan. The conflict over the governorship erupted after the death of Rana Megraj.

Before the year of 1947, the current day Umerkot city was a princely state named Amarkot, governed by Sodha clan of Hindu Rajputs. During the time of partition, the then Raja of Amarkot, Rana Arjun Singh chose for Pakistan despite a Hindu majority in the region. His love for Sindh province made Rana to select Pakistan, in accordance to Vikram Singh, his grandson, but now the family seems to regret the decision of joining Pakistan. He didn’t join Congress even though Nehru had personally approached him.

Umerkot has several locations of historical importance like Akbar’s birthplace at Umarkot Fort.

Rana Chandra Singh Sodha (1931–2009) was the Rana of the ex-Umerkot jagir after the year of 1947, and sustained to be a member of National Assembly of Pakistan and a federal minister.

There is a historical temple, Shiv Mandir, Umerkot.

The popular story of Umar Marvi is that Marvi was a young Thari girl abducted by then-ruler, Umar, who wished to marry her because of her grace and beauty. Upon her denial, she was imprisoned in the ancient Umerkot Fort for many years. Due to her bravery, Marvi is regarded as a sign of love for one’s soil and homeland. Modafinil 200 mg online http://www.buymodafinilonlinefast.com/

Guadarrama mountain to the left and Roman aqueduct to the right! Welcome to Segovia