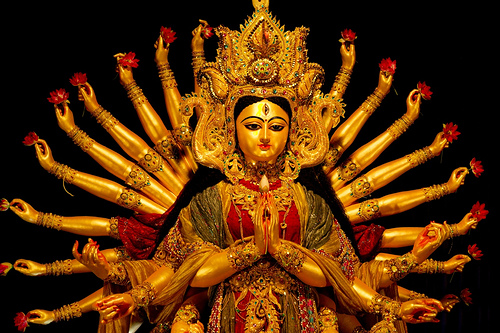 Fairs and festivals can be regarded as the living cultural heritage of a society as they play a vital role in conveying and expressing the faith and belief of the religion. They also act as important factors in keeping alive the cultural vibrancy of the place.

Take for instance, Durga Puja ( an annual Hindu festival of India) is celebrated to worship the Hindu Goddess ‘Durga’ across the country in different ways. In Northern India, it is celebrated as ‘Navaratri’, commonly observed as a time for observing vrat or fast. In Western India, men and women celebrate this festival by observing a special dance form known as Garba. In South India, the day of Dussera or the tenth day, is celebrated with a lot of fanfare. In East India, people observe it as Durga Puja with a lot of enthusiasm.

It is interesting to note that in Bengali tradition, Durga is not worshiped as a goddess rather she is welcomed as a part of family. It is believed that Goddess Durga visits her parents annually along with her four children. She stays for four days namely Sashti, Saptami, Ashtami and Nabami along with her children, Ganesha, Laxmi, Kartik and Saraswati and sets for her husband’s abode on Vijaya Dashami.

The festival of Durga Puja has become a symbol of Bengali culture. This festival spans for five days starting from ‘shasthi’ or sixth-day of ‘Navaratras’. Over the years, the nature and manner in which Durga Puja is celebrated has changed too.

The earliest mention of Durga Puja celebrations was during 16th century. It is recorded that Raja Kangshanarayan of Taherpur
or Bhabananda Mazumdar of Nadiya organized the first Sharadiya or Autumn Durga Puja in Bengal in 1606. A similar claimant is
Lakshmikanta Ganguly, the Zamindar of Barisha who reportedly started Durga Puja in 1610.It was during the 18th century, however, that the worship of Durga became popular among the Zamindars, the landed aristocracy of Bengal.

In 1975, during the British rule, an interesting act of worship was performed by the East India Company. It offered a thanksgiving Puja, no doubt as a politic act to appease its Hindu subjects, on obtaining the Diwani of Bengal.

The earlier pujas held were a private affair. The beginning of community puja is credited to the twelve friends of Guptipara in Hooghly, who got together in 1790. Christened “baro-yaari” puja or the “twelve-pal” puja, it was introduced by the family of the Cossimbazar Rajas. The baro-yaari puja gave way to the “saarbajanin” or “public“ puja in 1910 when the Sanatan Dharmotsahini Sabha organised the first truly community puja in Baghbazar in Kolkata Now the dominant mode of Bengali Durga
Puja is the “public” version.

Today, Durga Puja has became a grand affair among Bengalis across India.

In 1911, with the shifting of the capital of British India to Delhi, many Bengalis migrated to the city to work in government offices. The first Durga Puja in Delhi was held in c. 1910, when it was performed by ritually consecrating the ‘mangal-ghat’, or earthen pot symbolizing the deity. Later it transformed to Idol worship and this Durga Puja, is also known as the Kashmere Gate Durga Puja, currently organized by the Delhi Durga Puja Samiti in the lawns of Bengali Senior Secondary School, Alipur Road, Delhi.

This annual festival has grown over the years and the manner in which it is celebrated is constantly changing. Earlier, it started as a product of cultural faith and belief of the community. Slowly, it has become an identity of social integration as the people of community get together for this celebration.

However, changing priorities and interest of people are a major threat for their sustenance, and festivals like the Durga Puja must be recognized as the living cultural heritage and identified as the ‘Genius loci‘ to make sure they are protected as intangible assets of our cultural heritage.

This article is an excerpt from a research paper written by Anindita Dey, a conservation architect, who also writes for GoUNESCO.