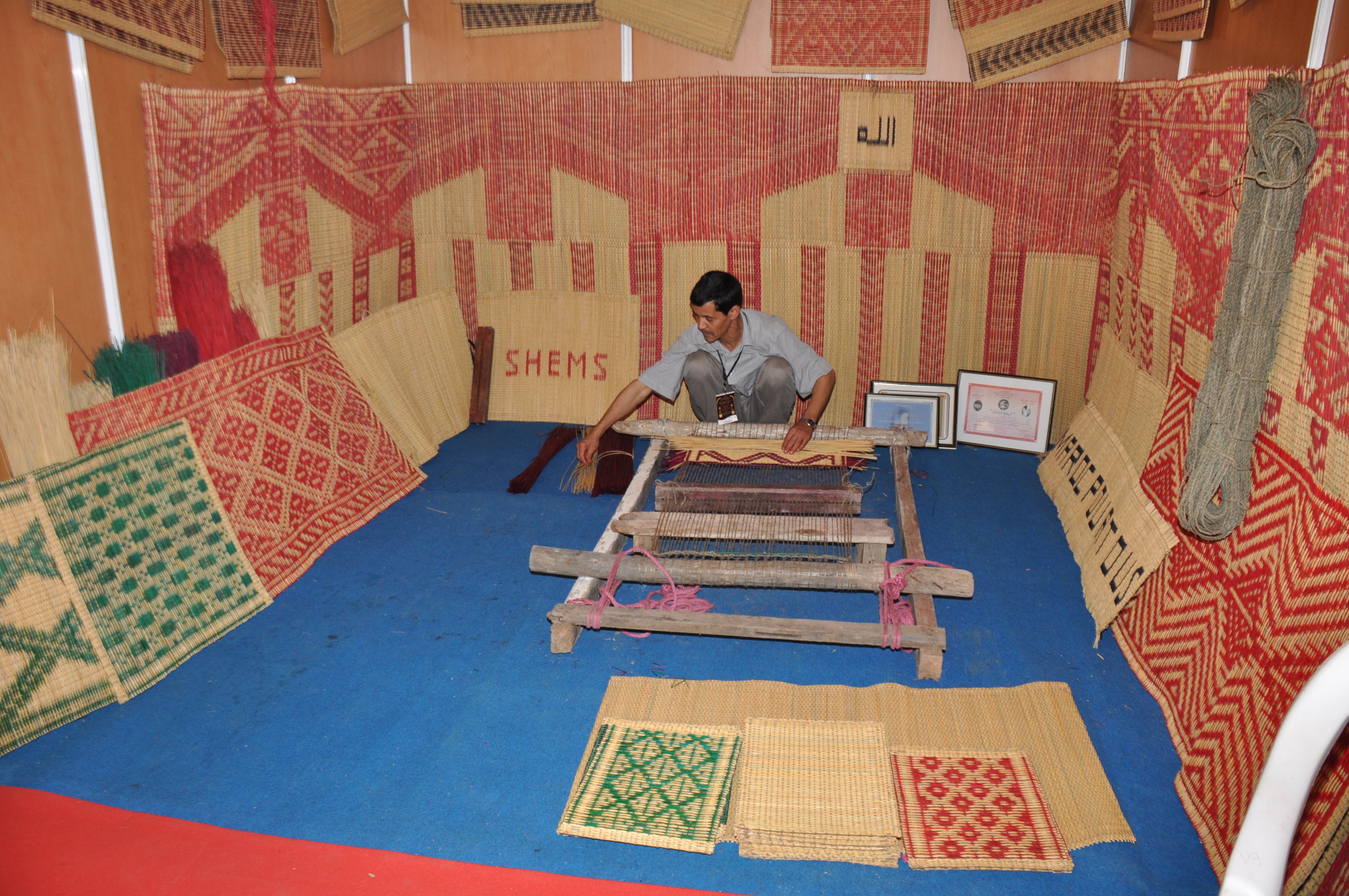 Traditional crafts and craftsmanship is considered one of intangible cultural heritage forms (UNESCO, 2003, n.d.-b). “Crafts are deeply embedded in the culture” (Klamer, 2012, p. 8). Regarding purpose, there are various forms of traditional crafts which were concentrated for “edutainment”. Many of these were going to be used in short term, e.g. in daily life routine, within festivals, rituals, or social events (Clarke, Brackner, & Wright, n.d.; UNESCO, n.d.-b). “Craftsmanship involves the skilled working with the hands to create something of use for a purpose where the skills require training and usually continuous practice” (Klamer, 2012, p. 5). Subsequently, the cultural context of creative crafts comes as a result of gathering a group of the shared apprenticeship knowledge, skills, and experience (Klamer, 2012, p. 8).

Mat, as a traditional craft, is considered a local craft dating back to ancient Egyptian era. The local people had been developed this innovative production “Mats” to face the common problem of humidity and insects. There are numerous models and forms to Egyptian mats, which are displayed in Torino Museum, Italy, that was used in ancient Egyptian rural community. This craft is needed a group of material and tools such as reeds and grasses especially el-Summar herbs (Juncus), and flax to weave strongly these reeds together. Unfortunately, the craft of mats doesn’t be well-known and popular like the old periods. Now, it is known in few Egyptian governorates such as el-Qaliubiya, el-Sharkeya, Kafr El-Sheikh, Qena, Assiut, el-Monoufia. (Egyptian Archives of Folk Life and Folk Traditions (EAFLFT), 2013)

Before starting to talk about this craft, I would like offer my appreciation to the Egyptian organizations, Egyptian Archives of Folk Life and Folk Traditions (EAFLFT) and Egyptian Society for Folk Traditions (ESFT), that do high efforts documenting these significant forms of Egyptian intangible cultural heritage.

Mats as a Traditional Craft

In fact, mats are considered one of Egyptian intangible cultural heritage features. Mat was dated back to ancient Egyptian era and then, developed along Coptic and Islamic era including a unique collection of geometrical forms, humanity and animal shapes as well as its distinguished colors.

There are some scholars, e.g. Naser Khosrow and el-Bughdady, who seek documenting mat as a traditional craft, that has been significant to the Egyptian culture and has continued even to the modern period. For instance, Dr. Soliman Mahmoud has written in 1987 a book discussing the geometrical artistic and technical values of mat as a craft. He could provide that mat, as an Egyptian craft, was dated back to the Neolithic era when it was used to cover the grain siloes’ ground. For its economic importance and prevalence, there are retailers who monopolized the manufacture of mats during the reign of Mohamed Ali Pasha. (Egyptian Society for Folk Traditions (ESFT), n.d.-a)

Soliman asserted in his book that ancient Egyptian people used other kinds of mat as curtains decorating it by geometrical and animal shapes with the bright colors. Craftsmen have been developed the mat forms shaping it as a bed that to be called “el-A’ngarib” and still well-known in Upper Egypt. In addition, he documented the technical styles of making mats that there are three ways: coiled mats, plaited mats, as well as woven mats which, regarding his description, to be currently considered the most common way. Also, he told within his book that craftsmen painted mats by chemical paintings or natural painting material such as reddish turmeric, and saffron. (Egyptian Society for Folk Traditions (ESFT), n.d.-a)

Regarding material, craftsmen called mats that to be made from the wicker of palm tree, “el-Fahl” or “el-Talil” while, to be made from reeds “el-Bous”, “el-Bariah”. Mat’s craftsmen are still making mats in the inherited track from ancient Egyptian era that they use the horizontal loom, called by “el-A’ada”, and set the mat lines, during the weaving process, by comb. Then, after weaving reeds “el-Summar” on loom, craftsmen view the mats to sun rays in order to dry.(Egyptian Society for Folk Traditions (ESFT), n.d.-b)

Regarding decoration and inscriptions, craftsmen inherits a group of shapes like “el-Douki Abu Tera”, “el-Moa’krab”, and “Samak el-Ashmawy”; moreover, there are some common geometrical motives for craftsmen such as “Kornisha”, “Sufra”, “Fayumia”, “Maktosha”, “Sahn”, “Badria”, and “Rasm Phara’on”, “Rasm el-Saraia”, “Sheni”, “Daier Hendi”, “Daier Kashmir”, “el-Mangor”, as well as other motives which include characters, birds, trees…..etc. Craftsmen don’t put any designs in front of them to copy but they have a great ability to save a group of inherited graphics and drawings, through their ancestors, which they directly weave. (Egyptian Society for Folk Traditions (ESFT), n.d.-a, n.d.-b)

Craft Traditions and its Significant Value

Internationally, there are numerous craftsmen who consider their traditions as a trade secret that to be forbidden teaching to strangers, subsequently we, as society, expect the craftsmanship knowledge may gradually vanish. Therefore, we should do high cooperative efforts not only to transfer this significant knowledge but also to preserve the traditional crafts and its traditions for future generations. Subsequently, these crafts are still produced surviving in its heritage context as well as reflecting the craftsmen’s creative skills. (UNESCO, n.d.-b)

Ensuring the sustainability of traditional crafts, we, as a society and authority together, should continue consolidating its old educational and apprenticeship system (Clarke et al., n.d.; UNESCO, n.d.-b). Consequently, we can ensure its significant value, a survived creative craft cultural context, that youth will take these creative crafts as a career, so they will appreciate strongly an entrepreneurship (Klamer, 2012, p. 8). It has been asserted by Klamer that
[Craftsmen] need [not only] to study usual subjects (such as material, techniques), but also need to learn about the social, cultural, and economic context of their future work. In addition, they need to learn about running a small business, and about cultural entrepreneurship (how to deal with clients, how to make use of social media, how to tell your story, how to price the work and so on). [So,] the national government [must] organize, and provide support for, the education of creative crafts from early age (including classes in elementary and higher education with the idea that students benefit from exploring their talents for working with their hands). (Klamer, 2012, pp. 7, 8)
Regarding the former quote, Dr. Soliman clarified the traditions of educating this significant craft.  Child starts his education process as an observer, and then, becomes a handler. Students seat on the left side of craftsman or teacher to learn the craft principles, and then, they transfer to his right side training practically. (Egyptian Society for Folk Traditions (ESFT), n.d.-a)

Here, I would like to begin my words with the quotation of craftsman Gamal Shosha in Gamaleya, which was mentioned in Egypt Independent Newspaper (2012), that
The golden age of handicrafts in Egypt has finished; our crafts are dying. I think the main problem is that new generations are affected by American modern lifestyles and forgot their origins and roots, although people in other Arab countries consider copper and silver artifacts a necessity in their houses. We need support from the mass media to enhance people’s awareness inside and outside Egypt about the historical and aesthetic values of handmade crafts. (Khaled, 2012)
Unfortunately, it has been indicated that the globalization and modern technology effect on the sustainability of traditional crafts. The capital companies and local industries often support the goods which the local people use within their daily life routine more than the traditional crafts. So, there are numerous craftsmen who can’t adapt this competition that mat’s craftsmen were originally seller that Egyptian people locally called them “el-Husaria”. (Egyptian Society for Folk Traditions (ESFT), n.d.-b; UNESCO, n.d.-b)

UNESCO Convention for the Safeguarding of the Intangible Cultural Heritage (2003) put a group of procedures ensuring recognition of the crafts and craftsmanship as an intangible cultural heritage in the local community, e.g. using particularly “non-formal means of transmitting knowledge”. As well as, regarding article 16 in the same convention, UNESCO creates a representative list of the intangible cultural heritage of the humanity preserving it at the global level. (UNESCO, 2003) This list has a group of criteria which, in June 2010 by the General Assembly, were revised; moreover, a proposed component for inscription should be satisfied all of (UNESCO, n.d.-a).

Preserving on the craft of manufacturing mats as a significant part of Egyptian intangible cultural heritage, I would like to present some recommendations which might be to contribute in the sustainability factor of this craft:

Khaled, R. (2012, November 11). A Dying Artform: Traditional Handicraft Production is on the Verge of Extinction [e-Newspaper]. Retrieved October 24, 2016, from http://www.egyptindependent.com/news/dying-artform-traditional-handicraft-production-verge-extinction

Klamer, A. (2012). Crafting Culture: The Importance of Craftsmanship for the World of the Arts and the Economy at Large. In Proceeding of The 17th International Conference of Association for Cultural Economics (ACEI). Kyoto, Japan. Retrieved from http://www.klamer.nl/docs/crafting.pdf

UNESCO. (n.d.-a). Procedure of Inscription of Elements on the Lists and of Selection of Best Safeguarding Practices [Website]. Retrieved October 22, 2016, from http://www.unesco.org/culture/ich/en/procedure-of-inscription-00809

Meet Gaurang Shah: The man who is reinventing the Saree