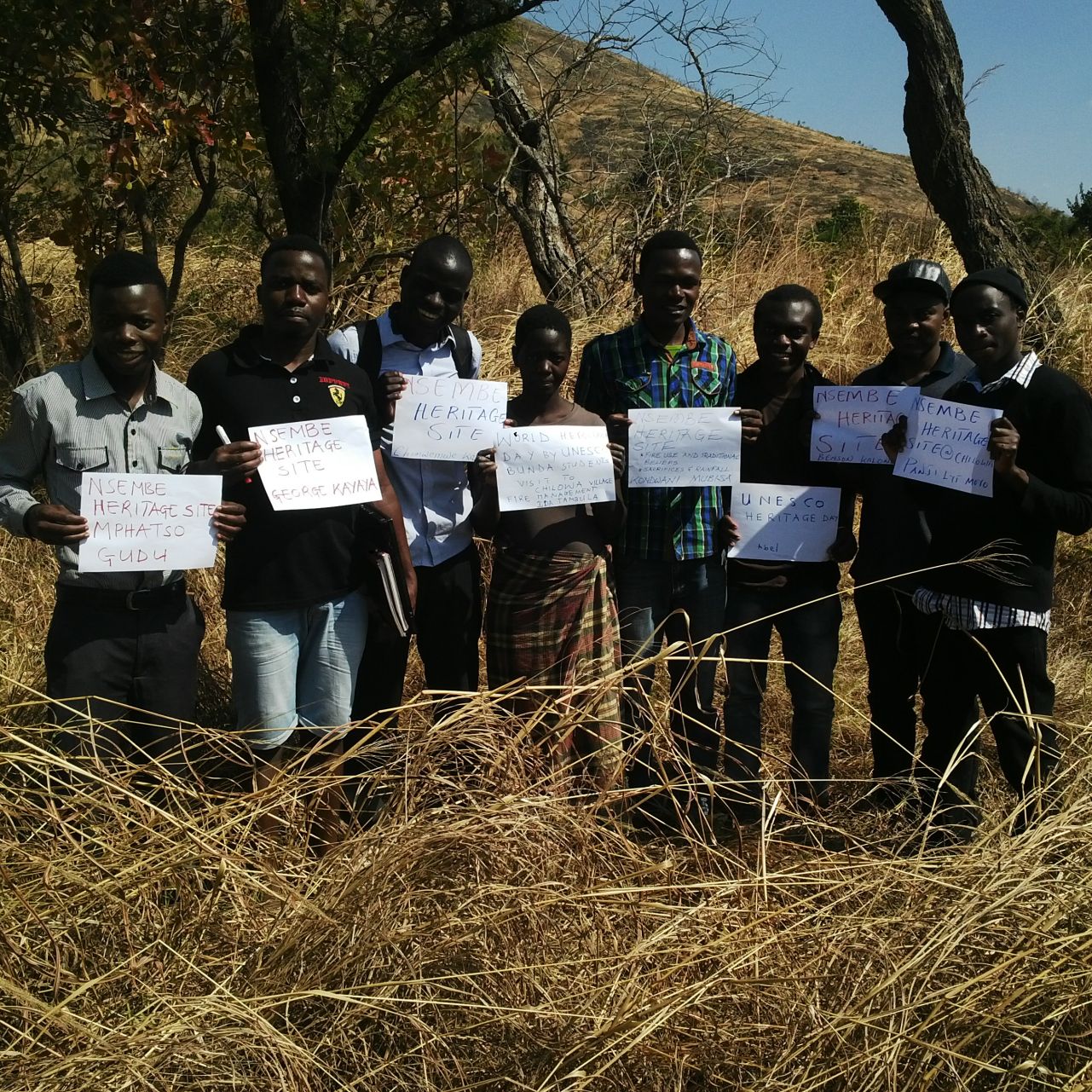 As part of participation in the GoUNESCO world Heritage day, on a Wednesday of 22 June 2016, seven students studying from Bunda College – a constituent college of the Lilongwe University of Agriculture and Natural Resources – visited a heritage site at the foot of Bunda Mountain a few kilometers away from campus.

It was a fascinating experience as the team trekked approximately five kilometers through the remote and fairly vegetated areas of Traditional Authority Chilowa to a Village further down the foot of Bunda Mountain. Inquisitive faces were observed on some members of the community as we trod through to the village authority’s place of residence.

Issues of culture and beliefs in this area- as is the case in many parts of Malawi- are only explained or made known to outsiders by chiefs or other authoritative figures of the community. Letting out sacred information about the village without the consent of the local authority is tantamount to rebellion and is punishable by the local authority. Such offenses, may to the extreme lead to expulsion from the village. So our destination was to the chief’s place of residence which coincidentally was in close proximity to our target place- the “Nsembe” Heritage site.

As a matter of enlightenment, the word “Nsembe” is a Chewa word- the most common local language in Malawi. The word literally means “sacrifice.”

Upon reaching the destination, it was unfortunate that the Village Headman of the area was engaged in other matters so Idah Tambula, a special personality within the royal family was delegated to take us to the site where explanations were made and several questions from the visiting team were entertained and answered accordingly.

According to Idah, the heritage site started way back before she was born. Definite date of establishment is difficult to ascertain as people in the past never used modern calendars to mark dates of particular events. Time was marked in relation to famous events during that particular time. She further explained that the Nsembe Heritage site was primarily established as a shrine or place where spirits of forefathers were appeased and worshiped to provide rains especially during times of drought.

In her explanations, Idah told the team that unlike nowadays, people in past used to appease these gods with a sacrifice of a child. Asked if the rains really fell upon making the sacrifice, she said that according to what she was told, a successful sacrifice resulted in instant rains and people could go back home wet.

The team wanted to know the criterion used to select the child for sacrifice and Idah pointed out that the child for sacrifice was selected by a team of chiefs in the area. A particular family could be selected from which children for sacrifices could be taken. The team inquired further to know the basis under which a particular family or kid could be selected, she clearly indicated that as a mere child in the royal lineage, she had no idea pertaining to the criteria used. However she indicated that choice of the family for this purpose had nothing to do with punishment due to a particular offense committed by the kid or any member of the family. A team of chiefs was responsible for everything in relation to the “Nsembe” offering event and information thereof remained sacred.

This site is within the agricultural area of the village. However, farmers near this area kept their distance from this place. According to Idah, the farmers are recently drawing nearer and nearer to the site due to demand for agricultural land and degrading levels of traditional beliefs in the light of modernity.

Human sacrifices stopped and today the ceremony only involves worshiping and other activities at the site and according to her, rains still fall thereafter. We failed to gathered details of what exactly happens during the ceremony due to issues to do with the sacredness of the information. However, Idah pointed out that one of the activities that happens is lighting up of fire using the traditional stick and stone method. In this method, a piece of stick is rubbed against a stone until the stick ignites. This fire is used to burn up the area around the alter and the end result would be rains within few days.

Fire appears to be a very important tool for people in this community. It was gathered that apart from using fire during the “Nsembe” offering event, the community uses fire in the dry season to burn the bushes to scare away wild animals like pythons and hyenas which pause a threat to small children. It is also used in fields as a land clearing tool.
Intangible Cultural heritage asset