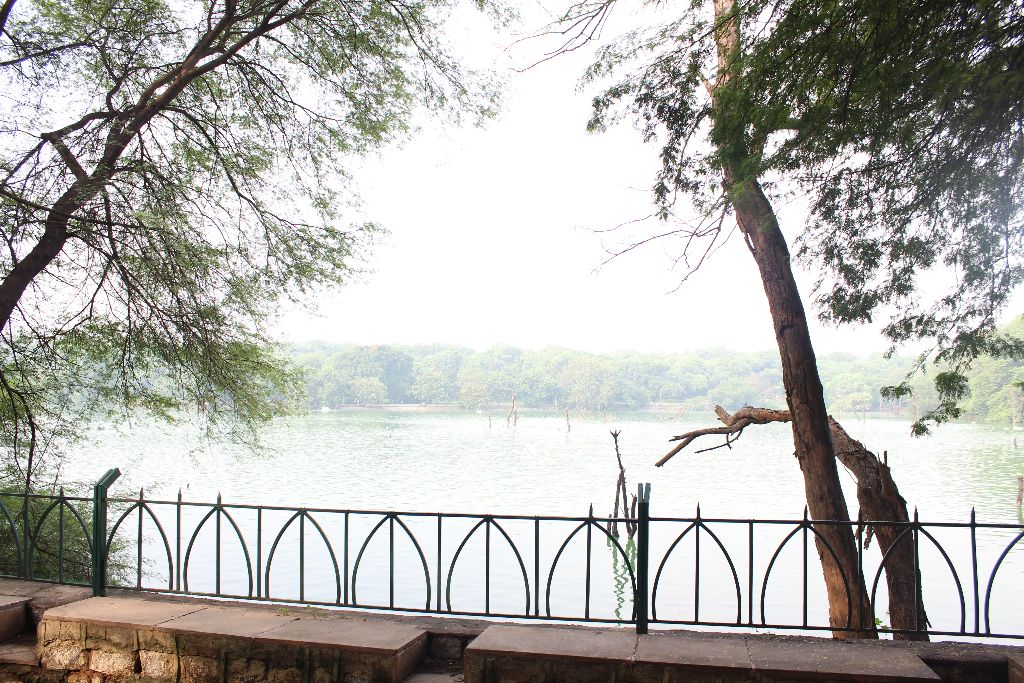 On 19 th July me and the other GCAs from Delhi along with our coordinator Vaishnavi visited Hauz Khas Complex for our first #makeHeritageFun task.

We started our walk from  DEER PARK, Hauz Khas . The complex and the park are adjacent to each other . We crossed the Park and reached Khilji Lake, often referred as Hauz Khas lake. Khilji lake was part of Siri, the second medieval city during the 13th century Delhi Sultanate of Allauddin Khilji . This large water tank or reservoir was first built by Khilji to supply water to the inhabitants of Siri. It used to be one large water body once but time and needs made it shrink to its present stage.

Then we got to see Munda Gumbad, which according to the archaeological deppt. was a double storeyed pavilion in the centre of the lake. At present only one storey is visible . And the rest is under the earth and the structure is surrounded by a mound.

The walls were speaking a lot . The graffitis were most probably the best in the city .

Then we moved on . Through the streets of Hauz Khas Village , through the enormous showrooms , restaurants and bars , we entered into the Complex. The whole stretch from the graffiti point and the entrance to the complex was a perfect  amalgamation of  urban fabric and heritage  and of course Nature ( the lake) . Yo have markets running on one side and on the other hand you have a heritage building and a lake running , this strong feature is very less seen in the city as most of its heritage structures are either at a isolated place or have a larger gap with the urban map.

Then begin the walk !

We entered the complex , greeted with some useful information given on the hoardings placed adjacent to the gate .

The entire madrasa area was on the eastern and the northern side of the lake . Built by Firuz shah , the complex contains a main Tomb of Firuz Shah , a madrasa , a small mosque and  six domed pavilions in its precincts.

The most eye – catchy building is the Tomb of Firuz Shah , all thanks to the ornamentations done on its facades.  Its basically a square chamber , built using local quartzite rubble  stone masonry .

Then the madrasa complex was visited . It actually flanks the Tomb from either side . The two arms are interconnected by small domed gateways passing through the tomb at the centre. The brackets are ornamented and it covers the upper storey balconies while the lower stories have corbelled support.

Then we visited the most ‘unusual ‘ building in the complex- the three domed pavilion locate d centrally in the residential part of the madrasa complex originally used as a place for discussion just like Diwan-e- Aam. It can be seen only in the Hauz Khas complex as the architecture style refers more to the rajasthani architecture .

Then most of us had to leave but the remaining 4 including me started walking down the lake promenade , soon the weather became more pleasant, breeze and rain started and made it a perfect weather for a walk along lake. Then finally we took exit from the lake , again ny crossing the deer lake.

Then on 26 th i,e, the next sunday i visited the place again to interview tourists and people. I tried to talk to few foreigners first but none of them showed interest or were too busy doing the visits . But after few m trials i finally could get a tourist named Kate Boyd, an Australian national.  She was on her tour of india and stayed with her friend in hauz khas during her visit.

Q. You visited the complex because your friend recommended you or it was you who did the research and came by your own?

A. I was not aware of this complex . My friend told me that the place have a nice lake and an old structure .

Q. Did you used the promenade along the lake for your morning or evening walks as a walk in the heritage?

Q. Well i wont be asking you about your favorite monument or place in Delhi or India , but would ask you another instead , which was more awesome the pre planned visits to the ‘known’ structures or the unplanned ‘ just happened to visit’ structures?

A. well both the categories have different importance, no doubt the Humayun’s Tomb or the Taj Mahal are fascinating but i guess the Structures like this ( Hauz Khas complex) are also very rich in maintaining their tag as HERITAGE.

Interacting with tourists at Hauz Khas

The Hermitage: A safe haven in the American Revolutionary War