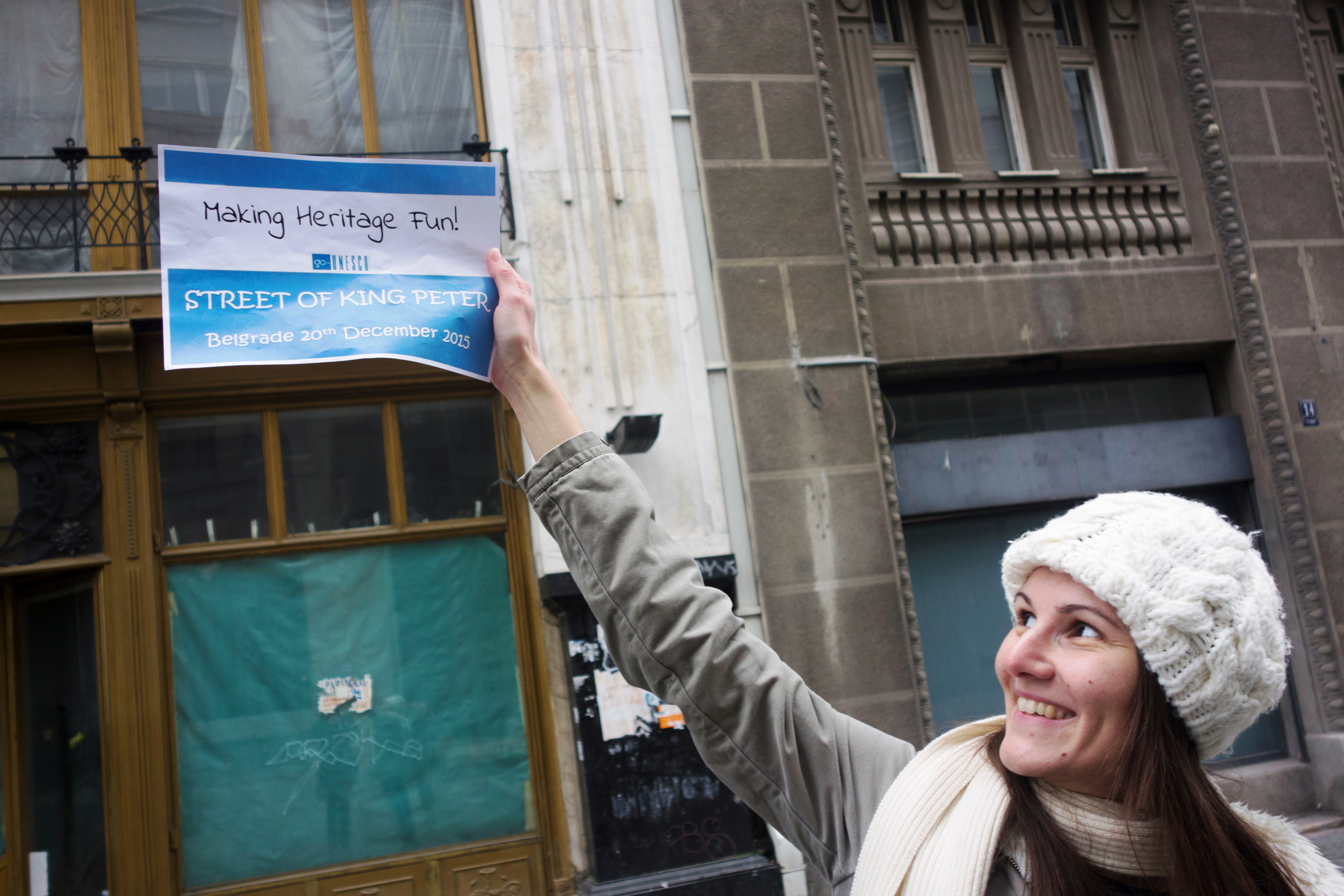 This year the manifestation Make Heritage Fun was organized for the first time in Belgrade, and I am very happy that I had the honor to participate in event together with my colleague as coordinator. We have chosen the King Peter Street as the meeting point for our Make Heritage Fun adventure. This street is in the hart of old part of the city and preserve the different layers of history of Belgrade and Serbia.

The most exciting thing about this project was interaction with enthusiastic citizens and random passers – by. Because the people with their stories and memories contribute that heritage have active present life. Leitmotif of the day was the employees and regular guests in oldest bistro in Belgrade called Question Mark (from the begining of 19th century). As soon as waiter saw us gathering in front of the building, he come out and kindly offered to help us. He invited us to enter and introduced us with their regular guests, three very friendly pensioners who come there every day to have a lunch. They were keen to share with us their stories about this monument and their connection with it on very fun way. We really enjoyed the time spent with them. These people are the best ambassadors of heritage, they create a special atmosphere and give a distinctive spirit of this monument.

I personally love this street because of its multicultural spirit. It is great that in one street we have three different religious communities that coexist with each other. At the very beginning of the street there is a Serbian Orthodox Cathedral of St. Michael. Today`s church was built in 1845, on the site of an earlier church from the first half of the 18th century. The building of Jewish Community of Belgrade is located in the second part of the street. In the same building, the Jewish Historical Museum was opened in 1959. Near the end of the street, on the corner with the Master Jevrem`s Street, is Bajrakli Mosque, the only active mosque in Belgrade. It was built in 16th century.

And from a wide variety of architectural styles in this street we can also interpret the changes in the historical, political and cultural development of Belgrade. From the oriental influence to the europeanisation of city and its culture. Through architecture we can trace the history of Belgrade from the time of Prince Milosh embodied in so-called Turkish-Balkan style, over neoclassical style, Art Nouveau, to contemporary styles.

It is also interesting that in this street in 1827 was opened the first bookstore in Belgrade and in 1830 the first pharmacy.

To summarize the impressions – it was a very interesting and dynamic day dedicated to heritage, we were socialised, shared stories and knowledge, and most importantly we had a fun.

A Heritage Walk To Remember