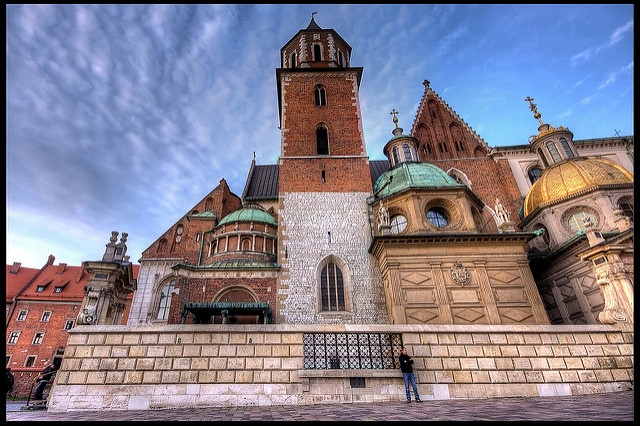 Krakow is one of the, if not the most important Polish tourist destination and there are a plenty of reasons why. This old, yet young, vibrant and lovely city is always a good idea for a weekend get-away. Its narrow streets, huge main square and castle-hill overlooking the river will make you forget the time and enjoy one of the major academic and artistic centers of Poland and central Europe.

Krakow’s history is, in a nutshell a history of central Europe. The prosperity and wealth in the late Middle Ages and Renaissance made this town a center of commerce, but also a vivid artistic hub. Some of the architectonical wonders of the town, like the Jewish Synagogue and Kazimierz date from the ‘Krakow’s Golden Era’. One of the oldest universities, The Jagiellonian University, founded in 1364 has become, with the work carried out throughout the centuries, one of the pillars of science and progress. Once a Polish capital, Krakow has an impressive castle complex – Wawel – with medieval, renaissance and baroque elements. Some consider it to be most significant historical location in Poland.

Later centuries were quite tough, not only for Wawel, but for the town in general. Always on the border between empires, Krakow witnessed the passing-through of Prussian, Austrian, Swedish, Russian and even French armies. Also, the Second World War left a big scar not only on the city itself, but on the surroundings as well. The notorious Nazi concentration camp Auschwitz is at less than 75km away from the Krakow. Most recent history accredits town’s willingness to rise and shine again – to become a youth hub, a tourist center and an important history lessons for everyone interested in hearing it.

So, go and visit! Get lost in the narrow streets of the old town on your way to the Wawel. Try to survive the encounter with the dragon who is watching over the castle and visit the museums inside. Learn all about the old Polish kings. Stroll around the main square and take you time to find the perfect souvenir at Sukiennice to remember this trip by (maybe some amber jewelry?). Don’t forget to visit the Jewish quarter and enjoy mulled beer and pierogi. And after a fun night out, there is nothing like a zapiekanka at the main square of Kazimierz.

It was in 1978, when UNESCO recognized the importance of Krakow Old Town and enlisted the town on the first-ever list of the World Heritage Sites.

Kalighat Temple – A Shakti Peeth and the oldest temple of Kolkata