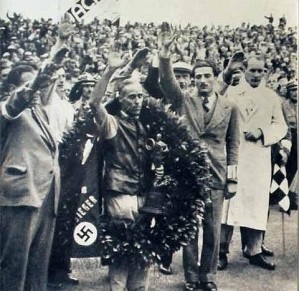 I will speak about one of the most famous race drivers of all times, Tazio Nuvolari. Born in Mantua, in specific in Castel Dario, he lived from 1893 to 1953 and participated either to motorcycle and racing car tournaments.

He entered in the history for the successes achieved during his career but even more for some incidents which would sound amazing if we wouldn’t know they are true. They were the years when Alfa Romeo, Union, Mercedes Benz hit the stage, engaging spectacular battles.

Among the incredible stories that fill in the pages of many books, I want to report the events of a race held in 1935, at Nürburgring.

On that time the nazi Reich was fully stating itself on the country and also the automotive sector had to express this strength. For that reason, Hitler decided to grant 450.000 marks to greatly improve Mercedes Benz and Union cars, in order to completely overwhelm the opponents. It would have been a great and bright example of German superiority.

Alfa Romeo to fight this threat, in the previously competitions created a car composed by two motors, thanks to the work done in Modena by Ferrari stable.  But it was too heavy for its tires, indeed the only successes it obtained were speed records, nothing else. Furthermore the vehicle weight overcame the limit of 750 Kg established by the new rules. The Mercedes also exceeded the weight limit with their 751 Kg, but their racing team scraped away the paint form the bodywork, losing 1Kg and leaving the cars with a silver appearance. What it was created were the Silver arrows.

So Nuvolari took the Alfa Romeo P3 for the upcoming race in Nürburgring, a famous car created by the Italian engineer Vittorio Jano.

At the eve of the race the opinion is clear: the Alfa Romeo cannot challenge for the victory. There is too much difference in comparison to eight cylinder provided to Union and Mercedes Benz. But Nuvolari ask to a member of his team a new Italian flag because the one employed here is discolored. Tomorrow he will win and there will be a fine Italian flag to be shown to everybody.

The day of the race it rains. When it starts, Caracciola, named “king of the wet” is immediatly on head. Nuvolari is second, followed by Fagioli, Rosemeyer, von Bruchitsch and Chiron. As expected, the Mercedes overcome the opponents and lead the race. On lap sixth on twenty two Nuvolari remains the only Alfa Romeo’s pilot on the road and he’s in sixth position. He don’t want to give it up and at the eleventh lap he exploit the fog present on a stretch of road, passing  von Bruchitsch, Fagioli and Caracciola all at once!

Leading now the game, every curve Nuvolari gains precious tenths on tenths and is the first who go to the box on the twelfth lap. The lever that act the fuel pump break and the team need to use bins and funnel, creating a delay of seventy seconds.. the race seems over.

Nuvolari continues and as he come out from the pit lane he is fourth. At the next lap the pilot forward is forced to reteat due to technical problems. Also Caracciola encounters some difficulties, and Nuvolari  pass him soon.

Incredibly now Nuvolari is second, but von Bruchitsch who, is first, has a great advantage caused by a superior engine. The German pilot is pushing hard, he don’t want to see the Italian on the back and therefore is ruining too fast, ruining the tires. From the Mercedes box they are saying to von Bruchitsch to slightly slow down, but he doesn’t want to do it. He is risking all for all to win the gran prix and Nuvolari noted it. The Italian pilot gains seconds and at the last lap he is distanced by 30 seconds. The organizers of the race begin to rise up the German flag and to pull out the national anthem’s disc.

Everyone is waiting to see from the fog on the way of the start line von Bruchitsch’s Mercedes, but nothing happen.

It would have been passed yet, but it doesn’t come. Suddenly a red car arrives and across the line. He is Nuvolari!!

Von Bruchitsch strategy didn’t worked and the tires collapsed at the last lap cause the excessive Mercedes power.

This event is considered one of the best races ever disputed by Nuvolari and it had a great historical and human value. It should have been the public demonstration of mechanical deutsche superiority and instead it became the evidence of a champion ability and dedication.

Relay of Youth in Yugoslavia